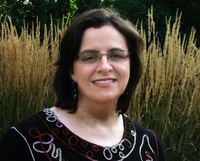 Jen J. Danna is a research scientist who specializes in infectious diseases at a university in Ontario.  Along with Ann Vanderlaan, she has created a new forensics mystery series featuring Massachusetts State Trooper Leigh Abbott and forensic anthropologist Dr. Matt Lowell.  The first book in this intriguing new series was Dead, Without a Stone to Tell It (published in June 2013) and introduced the team of Abbott and Lowell working to solve murders that required the science of forensics coupled with the indefatigable diligence of detective work to bring justice to those who could no longer speak for themselves.

Today is the release date of the series' first novella, No One Sees Me 'Til I Fall, and it is a welcome treat for those of us waiting for the next hardback, A Flame in the Wind, with its expected publication date of May 2014.  My review of this captivating novella follows below.  I recommend that readers jump into this exciting series sooner rather than later.  You will be hooked after the first book.

No One Sees Me 'Til I Fall

One Sees Me 'Til I Fall by Jen J. Danna


The e-book novella between full length books in a series is becoming a popular device for authors to keep readers involved with the series' characters and these novellas can be used to present a new story (in this case mystery), or to expand upon an event that happens or a character mentioned in one of the longer stories.  Jen J. Danna and Ann Vanderlaan have used this e-book to give the reader another adventure, albeit shorter, with the fascinating characters they've created. The new story novella serves to move the characters along and reveal more about them.  No One Sees Me 'Til I Fall gives fans of the newly minted series a satisfying length of a story where the progression of the characters and supporting characters is played out in a thrilling new case of forensic identification and smart police work.  Trooper Leigh Abbott of the Massachusetts State Police and Dr. Matt Lowell, forensic anthropologist, must combine their skills for a second time to solve a baffling murder.

In this second tale of gruesome murder, Leigh consults Matt about a just discovered quickly decomposing body that has been dumped in a landfill.  The body's enclosure in a garbage bag and being heated up by the garbage pile beneath it has resulted in major loss of tissue, so Matt and his graduate students team are needed to piece together a human being from the bones beneath.  The news that the body belongs to a female from age 18 to 23 is not a surprise, but the uncovering by Matt of a heinous abuse stuns everyone involved in the case.  Determined not to let the monster who abused and most likely also murdered this young woman escape justice, Leigh and Matt pool their resources and skills and those of Matt's enthusiastic grad students. Matt will unfortunately have to relive some painful war memories to aid the search for the killer, but his unique experiences are key.  Leigh and Matt will find their personal relationship gaining ground along with their smooth working partnership as the evidence unfolds.

Jen Danna magically weaves words to enable the reader to feel the intensity of the investigation in this story and feel a part of the action.  At times, I felt as if I were sitting at the table discussing the leads with the pair or running alongside in a chase.  Engagement is fully achieved.  One of the lines from the story expresses Leigh's admiration for the forensics involved in helping to give a face to the faceless victim, the words describing it as "marvelling at the skill that brought bone to life."  This series is so impressive in its detailed accounting of that forensics and the amazing results.  I can hardly wait to read the next book to learn more about how science and detective work take the impossible to the solvable.