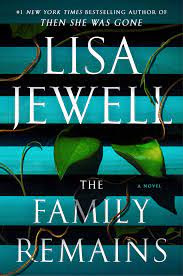 Do readers’ opinions influence authors? If you’re excited about there being a sequel to The Family Upstairs by Lisa Jewell, you can be glad that she listened to her readers who kept clamoring for the story from that book to be continued. Having just finished The Family Remains, I know how happy I am that those readers’ pleas fell on receptive ears. Learning what’s next for Henry and Lucy and Phin and Clemency so wonderfully completes the story that began for us three years ago. Surviving the house of horrors of their youth to become functioning, if scarred, adults and Lucy meeting her twenty-five-year-old daughter Libby was really only the beginning of how things turned out for the four. We’re left with quite a cliffhanger in The Upstairs Family that Phin has finally been located. How could readers not want to know more.

Libby’s boyfriend, journalist Miller Roe, has tracked down Phin’s location to Botswana, Africa, where Phin is a game reserve guide. Libby and Miller are preparing to fly to Botswana, with Henry insisting he tag along, when they receive word that Phin has left and disappeared into thin air again. So, the trip is off until Phin returns to Botswana or can be located elsewhere. But, Henry uses his devious sense of smart and finds a whiff of a scent leading him to Chicago. He tells no one else and leaves in the middle of the night so Lucy, who is temporarily living with her two young children at Henry’s flat, won’t find out he is chasing after Phin. It eventually takes Lucy’s son Marco and his tech savvy friend to break into Henry’s iPad and find where he’s gone.

The second storyline that coincides with the search for Henry and Phin is the discovery of human bones by a mudlarker. A plastic bag has washed ashore from the Thames River with the bones wrapped in an expensive towel, and DCI Samuel Owusu has been called to the scene. It’s obvious from the start of the investigation that it’s a woman who has been murdered, or that’s what evidence of a blow to the head/skull indicates. DCI Owusu is an excellent detective, and he follows the clues, as sparse as they initially are, to identifying the woman as one Birdie Dunlop-Evers, who twenty-five years ago lived at the Chelsea mansion where three adults were found dead from an apparent suicide pact. It was the same mansion from which the four teenagers—Henry, Lucy, Phin, and Clem—disappeared, leaving behind a ten-month old baby, named Serenity. Serenity became Libby when she was adopted, and Libby had received notice when she turned twenty-five that she had inherited this house. She has recently sold it for over seven million pounds, sharing the proceeds with Lucy and Henry. So, DCI Owusu starts trying to put the pieces together of what happened all those years ago when people died and people disappeared from 16 Cheyne Walk.

Then, there is a third storyline, which will, of course, eventually blend into the others, but it begins a couple of years earlier than the discovery of the bones and Henry taking off to Chicago. Rachel Gold makes stunning jewelry and is trying to get her business off the ground, with her father providing both moral and financial support when needed. She is working toward becoming independent of any assistance when she meets the man of her dreams, Michael Rimmer. After just a few months, Rachel marries this charming, successful, and attractive man looking forward to happily-ever-after. Trouble starts even before the honeymoon is over, and Rachel realizes the man she has married has a very dark side. When he shows her just what a monster he is, she leaves him and decides to wait out the two-year period to divorce him with no explanation required by law. Of course, he’s not through being a monster, and Rachel wonders if his previous wife Lucy had suffered, too. After a year’s separation, Rachel receives word that her husband has been found dead from stab wounds in his house in Antibes, France.

The story is told through the narrations of Lucy, Henry, Rachel and DCI Samuel Owusu. The short chapters where DCI Owusu updates the investigation into the death of Birdie are simply headed “Samuel” at the beginning of each chapter. I immensely enjoyed the “Samuel” chapters, as he is so good at connecting the dots and laying out the investigation for readers. Through Lucy’s narrative (and through Rachel’s, too), we get the picture of just how bleak an existence Lucy lived in France and how finally she is able to afford a house for her and Marco and Stella, her younger children. We also see how deep the relationship is between Lucy and Henry, how they work within their damaged psyches to be there for one another. Henry is a study in how a messed-up child still as an adult uses his artful skills of manipulation to get what he wants. We also see that Henry struggles to overcome his past of doing things he felt he had to and not wanting to be that person again. Rachel is a cautionary tale, reminding us that even an intelligent self-possessed woman can be duped and rush into bad decisions, although Rachel’s strength in dealing with a nightmare situation is admirable. Her close relationship with her father is heartwarming and, at times, heartbreaking. All through the book, family is at the forefront of what is most important, and it’s what has the reader rooting so enthusiastically for the happiness of these characters.

The Family Remains was a solid favorite for me. I always love it when there is a myriad of threads that are brilliantly pulled together by the end. Lisa Jewell has proven time and time again what a master plotter and storyteller she is, and this book didn’t drop a stitch in its presentation of details that were necessary and moved the story forward. Sometimes an author creates such intriguing characters that readers are left to fret about at the end of a book, but Lisa Jewell gifted us with this sequel that gives us peace of mind. These characters, as all great characters do, became real, imperfect people whom we care about. Some say that The Family Remains can be read as a stand-alone, but oh how much more a reader will be in the characters and their outcomes if the full extent of their suffering from The Family Upstairs is known. The author does an excellent job of referring to crucial incidents, but I think you would be cheating yourself if you didn’t read both books. The invested emotion is so worth it.

OK, Ms. Jewell, you have stretched my heart and mind to your will, and I was happy to go wherever you took me. I am irretrievably hooked on your books. I can hardly wait to see where you take me next.