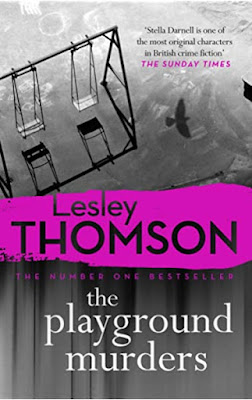 I am usually methodical about reading a series, start from the beginning and work my way through, but, alas, I couldn’t control myself with Lesley Thomson’s Detective’s Daughter series. I read the first one and immediately fell in love with Stella and Jack, and I really wanted to read the books in order, but then Lesley’s latest The Distant Dead arrived, and I had last year’s The Playground Murders sitting in my short stack, too, so I caved. I opened The Playground Murders and could not stop reading. Of course, I will go back and fill in after I've read The Playground Murders and The Distant Dead, but for now I’m now reviewing #7 in the series instead of #2. And, oh what a thrilling book The Playground Murders is. As I was reading it, I was thinking that it is exactly the kind of book that keeps me reviewing, because I just have to share my excitement about it.

Stella Darnell, now 53, started her cleaning business called Clean Slate as just that, a cleaning business. She and her crew clean homes, buildings, and whatever else needs cleaning that people don’t want to or can’t do themselves. Her business soon expanded to crime scene cleaning and detective work, which isn’t too surprising, as her father Terry Darnell had been a much-respected detective in the Metropolitan Police of London. After his death, Stella found a cold case of his she investigated and solved with the help of Jack Harmon. Although her parents’ divorce when she was seven-years-old and Terry’s devotion to his job put distance between the two, she recognized his skill and has his same eye for detail and penchant for completing a job. So, at present Stella has both a cleaning business and a detective agency, and it’s not a stretch to say they complement one another. The staff, including Stella’s mother, around her are highly competent and efficient. And, then there’s Jack. One of the reasons to read at least the first book in this series before any others is the introduction to Jack Harmon, an eccentric, deep thinking individual who is an underground train driver in London, but works with Stella, too. Jack and Stella have a working and personal relationship that is best left discovered by the reader. It’s complicated definitely applies.

It’s 2019 and Stella’s cleaning company is on site doing a job for a client whose father has been convicted of murdering his mistress in his home. Part of Carrie Philips' parents’ home has been a crime scene, but it is now released, and she has hired Stella’s company to clean the crime scene area. Carrie has a particular reason she hired Stella’s company, as becomes apparent when she shows up to the house during the cleaning and proclaims her father’s innocence and her desire to hire Stella’s detective agency to find evidence to clear him. With Christopher Philips, a well-to-do antiquarian, having admitted to finding his mistress’ body and hiding it, not having planned to ever report finding the body, his guilt seemed straight forward to the police and the courts. He didn’t admit to the murder, but connecting the dots led squarely to him. However, Carrie is adamant that her father is not guilty and thinks her mother did it. As the reader learns more about the mother, Penny Philips, there’s plenty of reason Penny could have. The problem with Carrie's theory is that her mother has an air-tight alibi of shopping in London, clearly caught on a street’s CCTV camera. The house and crime scene is located in Winchcombe, a village in the Costwolds, so time constraints support the alibi. The most important thing to Carrie is that Stella can prove Chris didn’t kill Rachel Cater, and so Stella and Jack get to work to see if anything can exonerate the man.

It’s 1980 and Detective Terry Darnell has caught a case no one wants to catch. A six-year-old girl has been found murdered in Little Wormwood Scrubs Park, her throat crushed. Supposedly, Sarah was alone in the playground area after dark, looking for her lost charm bracelet. The other kids who usually played with her had gone home. After interviewing the other children, Terry Darnell has a suspect, a homeless man who admits he saw Sarah, but that she was already dead. One child is particularly helpful in giving information about the vagrant. Ten-year-old Danielle Hindle fancies herself a detective and is more than willing to talk about the tramp named Derek Parsley and the death of little Sarah Ferris. When Parsley is later picked up by the police in blood-soaked clothes and admits to seeing the little girl dead, Terry feels that they have solved the case. But have they? Sarah wasn’t the first child found dead on the playground recently. Five-year-old Robbie Walsh had died only a couple of months earlier from what was ruled an accidental fall from the tall slide. He had supposedly been alone, too.

How do these cases 40 years apart connect? Because they do connect. Readers get to follow the gripping twists and turns showing how. Who killed Sarah Ferris? Who killed Rachel Cater? Stella and Jack must go back to that tragic playground murder to find the answers to the present day murder, answers that will force Stella to re-examine her relationship with her father. Seeing Terry Darnell at work 40 years prior was one of the best parts of the book. Gaining more of an understanding into what went wrong in his and Susie’s marriage that made their living together impossible. The turning point in Terry’s and Stella’s relationship is revealed, when she went from adoring daughter to feeling abandoned by him. And, reading about the heartbreaking misunderstandings and missed opportunities for Terry and Stella gives the reader a compassionate feeling for both parties.

I enjoyed the alternating timelines of 2019 and 1980. I can honestly say that I was as riveted to one timeline as the other. There’s no confusion to which time period the reader is in, as each chapter is marked at the beginning as either 1980 or 2019. Lesley Thomson has created an amazing story in which the two timelines rely on one another. It’s brilliantly plotted and paced. The characters are richly complex, and there’s much understanding gained in this particular book about the relationships that affect Stella. There are lovely nuggets of gold in character twists, too. My biggest challenge in reading The Playground Murders was finding a place I could stop and go to sleep or do anything other than read on. The Playground Murders checks all my boxes for a favorite read, and I can’t recommend it highly enough.

Summer Reading 2021: My Picks for June, July, and August

The Librarian of Saint-Malo by Mario Escobar (June 1st)

In Royal Service to the Queen: A Novel of the Queen’s Governess by Tessa Arlen (June 29th)

Choose Me by Tess Gerritsen and Gary Braver (July 1st)

The Stranger in the Mirror by Liv Constantine (July 6th)

Not a Happy Family by Shari Lapena (July 27th)

The King of Infinite Space by Lyndsay Faye (Aug. 10th)

The Madness of Crowds by Louise Penny (Aug. 24th)