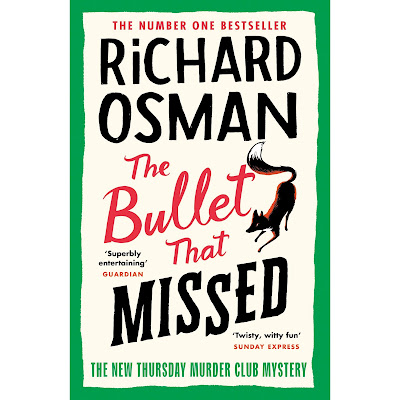 The Bullet That Missed by Richard Osman is right on target as another exceptional book in the Thursday Murder Club series.  I am so thrilled with this unique series that celebrates the knowledge and skills of the older population.  Only horses should be put out to pasture, not people who are still vital and capable of contributing.  Richard Osman has given us a group of the most delightfully irrepressible seniors who engage in the solving of murders and leave the naysayers in the dust. Elizabeth Best and Joyce Meadowcroft and Ibrahim Arif and Ron Ritchie are the Mod Squad of the retirement set.  The Thursday Murder Club that meets every Thursday at Cooper’s Chase, a lovely upscale retirement village, is dedicated to solving cold case murders, providing excitement, albeit often dangerous, to the clever septuagenarians and bringing closure to victims’ loved ones.  It’s not a macabre hobby that the group has; they truly care that justice is served.  We know that murder is a serious business, but the humor injected into these stories is brilliantly done by Osman.  It’s often the deadpan humor of Elizabeth or Joyce, with its wit and straightforwardness, that has me smiling the most.

The Thursday Murder Club has a new cold case they are starting to work on.  Joyce directed their attention to this particular cold case because the victim worked alongside TV news personality Mike Waghorn on “South East Tonight,” and Joyce would like to meet him.  The disappearance of Bethany Waite ten years ago has never been solved due partly to a body never having been discovered.  Her car was found after it went off a cliff, but Bethany was gone, dead or alive, and the evidence led toward dead.  There was a story she was working on at the time of her disappearance, a huge VAT fraud involving mobile phones that had put millions in the pockets of at least two people.  Some attributed her death to suicide, but lack of a body doesn’t support that, and it’s more likely interfering with a criminal enterprise doomed her.  After the group interviewing Mike Waghorn, he and his makeup artist Pauline Jenkins join the Thursday Murder Club members to look for answers about Bethany’s fate.

As I mentioned Elizabeth is a former spy, a world renowned one back in the day, and it is through her fame in that world that she becomes a target for a wealthy money launderer.  He has someone he wants Elizabeth to kill, and if she refuses, Elizabeth and her friend Joyce will die.  Well, Elizabeth is nothing if not calm and cool under pressure, even when she learns the mark is an old friend in the spy business. She formulates a plan to deal with this threat, while keeping her eye on the current project of uncovering the truth about Bethany Waite.  Her plan for this looming problem is to trick “The Viking,” the name Elizabeth has given him, but he proves he is a more formidable and intelligent force than Elizabeth had presumed.  However, “The Viking,” does not really have his heart in killing, so there may be hope for a solution after all.

These books are clearly character driven with the most delightful, unconventional characters at the wheel.  Their quirkiness is part of their charm, and their ages make them the perfect sleuths to be ignored by the bad guys.  Being invisible is, of course, just one of their superpowers.  Their intelligence and strategic skills are never to be doubted.  Ibrahim, a retired psychiatrist and Elizabeth, former MI5 operative, are a bit more intellectual in their manner, but Joyce, a retired nurse, has plenty of smarts simmering on-call, and Ron didn’t run a union without knowing how to get things done.  There is a fantastic supporting cast, too, that includes Bogdan Jankowski, a Polish emigrant, who is a handyman extraordinaire; PC Donna De Freitas and DCI Chris Hudson, local police partners who have become friends as well as cohorts of the Thursday Murder Club members; Elizabeth’s husband, Stephen, who is in the clutches of dementia.  Newcomers in The Bullet That Missed are Victor Illyich, Elizabeth’s former KGB friend, and The Viking, who loves books and proves to be quite entertaining.  One of my favorite scenes in the book is when The Viking and Joyce meet at Joyce’s apartment and what ensues. The British dry humor that readers encounter in the characters’ thoughts and speech gives comic relief at all the right places.

There is romance in this story, too, some of it new. Donna and Bogdan have found one another to be quite compatible, in all ways.  Donna’s mother, Patrice De Freitas, is still in a relationship with Donna’s police partner, DCI Chris Hudson.  And, Ron is happily surprised that makeup artist Pauline has taken an interest in him.  Of course, Elizabeth is devoted to her husband Stephen, who suffers from dementia, and it’s both heartwarming and heartbreaking to follow her attempts to shield him from his decline.  Joyce’s great love in her life is her husband who passed some years ago, and while she doesn’t dwell on it, we know how deep their love was.  No overbearing message here, but a gentle reminder that love is for the old as well as the young.  Of course, romance within this crew lends itself to some humor, too, and when Ron’s new girlfriend Pauline takes him to the spa, be prepared to absolutely laugh out loud.

The pace of The Bullet That Missed never drags. The action flows seamlessly along a path of continuing momentum, working up to the finale.  The only problem is that it does end.  I am so enthralled with the characters and situations they get themselves into that I truly want it to be the never-ending story.  It’s a rare murder mystery that will keep one smiling throughout the whole book, but this book and this series have the witty dialogue and plots that accomplish the balance of danger and levity.  Yes, there are plenty of serious moments, but the love that the characters have for one another and the friendships that outshine any fears give readers a sense of well-being from beginning to end.  I think The Bullet That Missed is my favorite of the three books so far, but I would gladly read all three again and love them all.  So, I don’t just recommend The Bullet That Missed, I wish it for you as a read and feeling you deserve to experience.