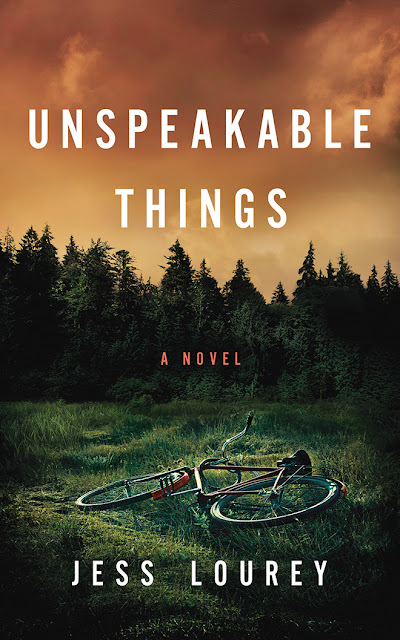 When I taught high school, particularly working with writing portfolios, I would occasionally come across a student's writing that spoke from the unimaginable situations they dealt with in their young adult lives, family and living situations that made me wonder how these students were able to function in any sense of normal at school, let alone do schoolwork and keep up. As Jess Lourey's book Unspeakable Things sets forth, there are those young people living so far outside "normal" that they must develop a defense system to survive it. If this book doesn't startle your awareness and break your heart, you need a checkup to make sure you have a heart. The time setting of this story is the 1980s, as it is based on true events that happened during the 80s in the Minnesota community of the author Jess Lourey, but it could have easily taken place today.

Cassie McDowell is a twelve-year-old girl struggling with an unconventional family life in which her unemployed sculptor father rules the family with his too often dark and unpredictable moods. On the outside, Cassie's presents a financially strapped existence, but a respectable one. Although her father doesn't bring in much money with his art, he is well-educated, and Cassie's mother is a high school English teacher, also highly educated. I pretty much spent the whole book despising both Cassie's parents. It would seem enviable to live on a farm with acres of wild to explore and fresh air to breathe in, but Cassie's parents use their distance from town and neighbors to an adult advantage, exposing Cassie and her older sister Sephie to adult situations way beyond their years. It's also easier for other people to pretend that the McDowell parents are just a bit free spirited, rather than unfit parents.

But, Cassie begins to have worries outside her home, beyond her fear of sleeping in her own bed. Boys her age, some younger and some older, are being taken. They are returned, but the boys are not the same as before. Something dark has crept into their lives and settled there. School is just letting out for the summer, and after the second boy is abducted, a curfew of 9 p.m. is set for the small town of Lilydale. Childhood is being interrupted by the sound of a siren every night, reminding everyone that boys are still being snatched. Some semblance of normalcy is sought, with birthday parties and swimming in the creek, and Cassie daydreams about the nice boy in her class who has actually spoken to her. But, when a boy is taken and not returned, the community of Lilydale must face the darkness of its own prejudices as it points fingers in predictable directions.

This book is a dark tale indeed, but the character of Cassie McDowell makes enduring that darkness bearable and rewarding. Cassie is an unforgettable hero who has the courage and perseverance that those around her, especially her parents, lack. She sees more clearly than others, partly because she is in the realm of those boys being abducted and partly because she hasn't yet taken on the blinders of adulthood. Her world has sharp corners, but she finds some comfort in her own inventions, like kitty clinic and the sheet game and writing stories from what she reads. She is a survivor, and I am the richer for having read her story.

Jess Lourey is an author who writes from the soul. Readers will feel the characters full force, embracing some and detesting others, but you will feel them. There is a preciseness in Lourey's description that seems to hit on just the right words, never superfluous, but always complete. The dialogue is a moving, flowing part of the narrative that shapes the characters into their parts and often is chillingly revealing.

It's interesting, to me at least, that Unspeakable Things was the first book I bought this year, but it was the last book I read this year. I can be obtusely wrong sometimes. I have a category in my Goodreads book listings that is entitled "why haven't I read this book yet." Well, I can't think of a book that better fits that category than Unspeakable Things by Jess Lourey. I highly recommend that readers who have somehow missed reading this book thus far make it a priority to read it soon. You will be glad you did.

Posted by Kathy Reel at 7:47 PM No comments: 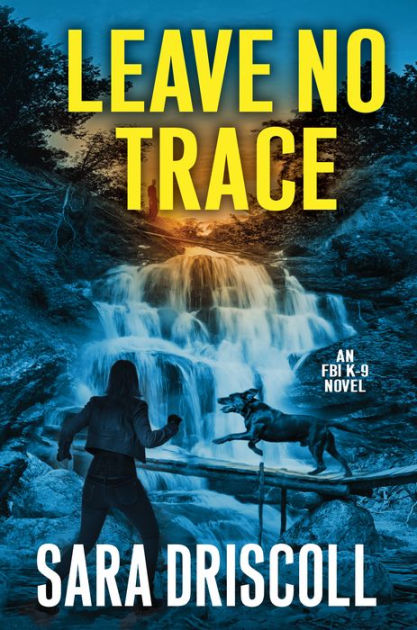 The fifth book in the FBI K-9 series, Leave No Trace, by Sara Driscoll is so much in so many ways. It's hard to decide which aspect of the book to praise first. The story is an original, thrilling adventure through the outdoors fraught with river rapids, challenging forest and hill climbing, wild animals, and survival skills. One of the shining qualities I love about this series are the original story ideas, the situations that the FBI’s Human Scent Evidence Team, dogs and their trainers, encounter, and the skills they must hone to overcome killers who put them in dangerous spots. And, within these original stories are historical insights and learning that are such integral parts of the story, never just information, it is the backstory that is the backbone of current circumstances. The characters, both regulars and new draw the reader into their lives and create an investment from the reader. When an author creates characters who evoke emotions and understanding from the reader, well, the great idea of the story comes to life full force. While the FBI dog handlers and others are the characters who create the action, it is the dogs in this series that grab your heart and don’t let go. Setting is another area in which Driscoll excels, as the demanding surroundings with which the team must contend are so aptly described, it's easy to imagine oneself struggling with thick forest and churning rivers. Meg’s fear of heights aptly registered with me and had me gasping more than once.

In Leave No Trace, handlers Meg Jennings and Brian Foster, with their dogs Hawk and Lacy, are called from Washington, D.C. to small town Blue Ridge in Georgia, where an expert bow hunter has killed multiple times, a single deadly arrow piercing each victim precisely on target. Special agent Sam Cruze, in charge of the investigation, welcomes the resources of the tracking dogs. Unfortunately, this killer seems to be particularly wily about covering tracks. As the victims are in some way associated with a new dam proposal for the area, the suspect list includes a large number of people who stand to lose their land and livelihoods to the construction of the dam. Also of interest are the Cherokee Indians in neighboring North Carolina who are trying to reclaim this land that was stolen from them in the early 1800s. Add to the suspect profile that bow hunting in the area is a competitive sport, and there are many who fit that descriptor. With connection to the three states of Georgia, North Carolina, and Tennessee, narrowing down the suspect list is a daunting task. The shooter is, however, in an elite status of perfection shooting from difficult terrain and hitting the mark, so that factor can eliminate many.

One of the aces in the hole that the FBI K-9 unit has is Clay McCord, a Washington Post reporter who is an outstanding researcher and has worked with the team before, with the promise of an exclusive on the story afterward. McCord also happens to date Meg's sister, Cara. So, when McCord arrives on site, he immediately goes into his whirling dervish mode to gather needed research on the bow hunters who have a stake in dissuading the building of a new dam.

Before a solid suspect will be identified and apprehended, the action is intense. Readers say that a book is page-turning exciting, but Leave No Trace is as compelling a read as I have encountered. Meg and Brian and Hawk and Lacy must be at their most fit, physically and mentally, ever to overcome the obstacles of the Appalachian wilderness, man-made flumes, unfriendly wildlife, and a unerring killer. My heart was in my throat more than once while reading about characters and animals I've come to care about being in great peril. Pacing is yet another element that the author accomplishes effectively.

Not apart from creating a great story, characters, setting, and pace are two features of this book and this series that make it such a favorite of mine. At the heart of the series is the relationship and interactions between the handlers/trainers and their dogs. In particular, Meg and her black Labrador Hawk are in a symbiotic relationship of mutualism, both working as one and benefiting the other. Of course, it's the affection they show one another when not on point that warms my heart. With so many dogs being in the book, the FBI dogs, Cara's dogs, and McCord's dog, it's a most satisfying place for we dog lovers. But, it is representative of loving partnerships with all of our furry family members.

The other feature of the series is what I learn from the stories. There's nothing didactic about these books, but there are always issues, more than one, which benefit the readers as they navigate their lives and worlds. In Leave No Trace, the land that the new dam will cover with water is land which was stripped from Native Americans two hundred years ago, with no reparation, and much heartache. The infamous Trail of Tears is part of this history. With the Cherokee having filed claim to the land, the history of it flows throughout the book in a natural inclusion. The epigraphs at the beginnings of each chapter contain quotes or information relating to the topic of the stolen land and the demise of those forced from it. Not all the epigraphs are Native American related. Some explain facts or aspects of dams, which figure so importantly in the book. None of this information gained through the epigraphs is overwhelming or moralizing. For me, it helps with the understanding of the characters and their actions.

This series has been a favorite for me since its beginning. Each has its own story that is completed in the book. There are growing relationships with the characters, their personal dramas, but it is possible to pick up one of the five books and read alone, too. Leave No Trace especially lends itself to a stand-alone read. Of course, I would encourage readers to enjoy all five, but the starting point is up to you. As with most loved series, waiting for the next book is hard, but the good news is that #6, Under Pressure, has just been finished and will be out a year from now.

I was given the opportunity by author Sara Driscoll and Net Galley to read Leave No Trace before publication, and I assure all that my remarks are all my own opinion.

Posted by Kathy Reel at 7:59 PM No comments: