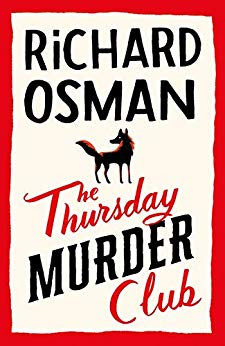 What a great adventure with the septuagenarians who call themselves The Thursday Murder Club at Coopers Chase Retirement Village. It’s an idyllic setting in Kent, England, with open space and country air. A luxury retirement home that has been built out from an original ancient building that used to be a nunnery. Throw in for atmosphere, and later more, the nun’s cemetery on the hill, and it is a lovely place indeed for a murder mystery or two.

The four quirky septuagenarians who gather every Thursday to discuss murder are sharper and more resourceful than anyone would initially give them credit for. It’s a closed group, meeting under the covert name of a Japanese Opera study group, which discourages any newcomers. Elizabeth informally heads the group, and her past life is anybody’s guess, but that guess would have to include travel to many parts of the world and a contact in every port. Joyce is a former nurse who is recruited to join the group after it’s been in operation for a bit, and who is the perfect hostess with plenty of hidden talent. Ibrahim is a retired psychiatrist who is methodical and thoughtful about his actions, a calming presence when needed. Ron is retired from his union job in which he fought hard for others, and who has a famous ex-boxer for a son. Ron’s plain-spoken manner gets to the heart of matters. The member of the group whom Joyce has replaced is Penny Gray, a retired Detective Inspector who now lies comatose in the wing of Cooper’s Chase where she can no longer participate in anything. It was Penny’s cold cases that were the basis for the Murder Club’s beginning. However, the group soon gets a fresh murder on their agenda, and they could not be more thrilled.

By chance, the residents of the retirement home receive a visit from Donna DeFreitas, a local police constable, sent to deliver a talk on security. Elizabeth and her friends have ideas for a less boring talk, and Donna gets her first taste of just how unconventional “old” people can be. There’s life in those old bones yet. The Murder Club and PC DeFreitas quickly meet up again when one of the partners in developing Cooper’s Chase, Tony Curran, is found murdered. Three of the Murder Club had witnessed an argument between Tony and the other developer/owner, Ian Ventham.

The members of the Murder Club know that they can’t miss out on solving this murder that’s happened practically under their noses. Of course, as Elizabeth knows from experience, you need a source on the inside of the action, and she cleverly is responsible for getting Donna assigned to the murder case. Donna’s boss, DCI Chris Hudson, is exactly the right person to run this murder investigation, as he isn’t invested in his ego and listens to Donna, and eventually the Murder Club gang. When there is a second murder, it takes all the heads together to dig down to the truth.

The characters are what drive this book, this adventure of murder solving. Elizabeth, Joyce, Ibrahim, and Ron find friendship and purpose in their “golden” years by using their brains and individual skills to show just how valuable they are. We come to know this group as interesting, vital people, not ready to be put out to pasture or ignored. Of course, they must deal with the mortality of their friends, and they can’t help but think about their own at times. Yet, the reader will see far more optimism here than negativity. And, there are younger characters, too, who make this story sing. The give and take in the relationship between Donna and Chris is delivered brilliantly through their entertaining dialogue. Donna has arrived in her boss’ life at just the right time for him, and the Murder Club has made a timely arrival in Donna’s life as well.

One of the vehicles author Richard Osman uses in The Thursday Murder Club to move the action forward is Joyce’s journaling. Her journal entries fill in blanks for us and help to bring loose ends together in what the Murder Club is doing in their investigation. It also gives us a more personal and fleshed out view of Joyce, such as her relationship with her daughter. The journal serves as a smooth segue from one scene to another, while enhancing our emotional investment in the characters.

Charming, witty, thrilling, heartwarming, heartbreaking. The Thursday Murder Club encompasses all those qualities, giving readers a great story with unforgettable characters. Layers of intrigue to sort through as the murders are solved, and more than one suspenseful moment when you wonder if our aging sleuths will escape a dangerous situation. I can absolutely see this capable cast of characters in a TV series, which also means more books, please. Richard Osman’s debut novel is one that readers don’t want to miss. 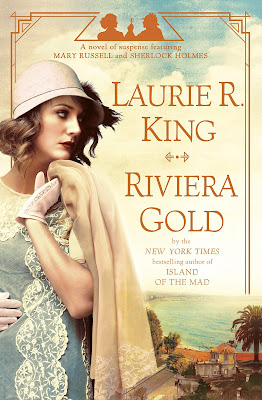 A new Mary Russell and Sherlock Holmes book from Laurie King is always a cause for celebration. For those of us who are rabid fans, or BEEKS, it is one of the reading events we live for. This series has inspired so many readers to expand their enjoyment of the Sherlock Holmes adventures. Laurie King has created an exciting extension of the Sherlock Holmes stories, giving him a young wife, who is equal to the challenge of solving mysteries and curbing the criminal element. The settings in the series have taken us from England to Jerusalem to Japan, and in Riviera Gold, we travel to the south of France and Monaco.

Also included in the author’s extended world for Sherlock Holmes is the shaping of a life for the ubiquitous, but seemingly invisible, Mrs. Hudson. In the broadened world of Russell and Holmes, Mrs. Hudson is given an adventurous past with surprisingly unsavory elements. It is the fascinating past and present of Mrs. Hudson that this latest entry into the series goes, with the background being set up in the next-to-last book, The Murder of Mary Russell. I recommend that you read that book before this one.

Having finished their business in Venice (Island of the Mad), Sherlock takes off for Romania, but Mary joins in the sailing party with her good friend the Hon. Terry and his gang for the south of France. Mary has an ulterior motive for the trip, as she thinks it is to Monaco Mrs. Hudson traveled when she left Sussex and England forever. Mary arrives in the south of France and meets the Murphys, Gerald and Sara, who have a home in Antibes, where Mary and her friends are staying at a hotel. It is the Jazz Age (1920s) and the time of the Lost Generation, so it’s a time of great change and new direction. The gatherings at the Murphys are a who’s who in young artists and writers of that time—Pablo Picasso, Ernest Hemingway, F. Scott Fitzgerald, and more. Gerald and Sara Murphy have created an artistic haven for creative minds, which in itself is an amazing story.

And, the Murphys gathering on the beach with friends is where Mary, on her first full day on the French Riviera, runs into Mrs. Hudson. Mary shows great restraint when she’s surprised to find Mrs. Hudson so quickly, but she saves their reunion for when they’re alone. As it happens, Mrs. Hudson, who now appears as a woman of elegance and sophistication, will need Mary’s help and eventually Sherlock’s, too. Mrs. Hudson’s past is rearing its ugly head as well as its elegant one, and she finds herself suspected of a murder. Before answers can be found, there will be rumors of a lost fortune, the appearance of White Russians, and the delight of Lily Langtree. Add to that the arts community in neighboring Antibes, including a trip to a bronze pour, and the excitement is at an all-time high

One of the aspects of Riviera Gold I enjoyed the most was the independence that Mary shows in it. It is very much her book and her direction that guides the action of the story. Readers of the series are already cognizant of how valuable a team member Mary is in her and Sherlock’s sleuthing and missions, but this book shows Mary coming into her own, a freeing of the spirit in a sense. While Sherlock shows up and is a part of their investigation into the murder, it is Mary who shines. The evolution of the personal relationship between Russell and Holmes will be interesting to follow.

Laurie King always gives readers a great story and great characters. She also does an enormous amount of research which flows smoothly through the historical details of her books. Riviera Gold was a goldmine of interesting historical connections that led me to do more reading myself. Gerald and Sara Murphy, who relocated from America to the French Riviera in the 1920s, were instrumental in furthering the careers of major writers and artists. I found myself fascinated by them and their Villa America and had to read more about them. The whole book is full of historical gems.

I highly recommend this sixteenth addition to one of my favorite series. I’m looking forward to the continuing exploits of Mary Russell and Sherlock Holmes.

In a year of outstanding books to read, I suffered from the malady of so many of my fellow readers, the inability to focus and thus to read.  Oh, I did manage to read, but the number of books I read was down, and in a richness of reading year, that hurts.  Unfortunately, my reviewing and blogging was negatively affected, too, but I'm up and running with that again.  Let's face it.  2020 was not a normal year at all for readers and authors.  Virtual book promotion, learning to use Zoom (well, I'm still working on it), authors online book publishing birthdays.  But, the reading community, in particular the mystery crime community, is a resilient group who are passionate about their cause, so we have not only survived, we've thrived, gotten closer.  Even though my reading count was down, what I read was a  constant source of enjoyment.  It was hard to narrow down any favorites, because all the books I read were enjoyable.  So, my list is long, but it includes the ones I enjoyed the very most.  A couple of the books were published in 2019, but the rest are 2020 publications.  I will have quite a few more 2020 publications that I will feature in another list after I've read them.