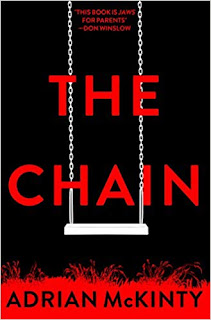 The Chain is the first Adrian McKinty book I've read. It won't be the last. The word "unique" is often tossed out to describe a storyline or the way a story is told, but that word should be reserved for those rare occasions in which the story fills that word up to its full potential. The Chain is as worthy as a book gets to claim the word "unique." It gives readers something they've never had before. Wow! That's quite the accomplishment. And, so Adrian McKinty has created a brilliant story that you haven't read anywhere else, with characters who show us what doing the impossible looks like, and a writing style that builds the suspense to perfection. All the hype you've heard about The Chain is true. It is that special book.

Rachel Klein has already survived breast cancer once, and there are indications that she may not be through with that battle yet. She thinks it's the toughest fight she will ever face. It's not. After dropping her thirteen-year-old daughter Kylie off at the bus stop, Rachel is on her way to her oncologist, but she doesn't get there. She receives a phone call that will set her straight on what is worse than cancer. The person calling reveals that she has kidnapped Kylie, and to get her daughter back, Rachel must follow the rules of depositing $25,000 in bitcoin into an account and kidnap another child to suffer the same experience as Kylie. The woman calling has a son who was kidnapped. Everyone having their child returned depends on the next person following the "rules" and not involving the police. It's called The Chain and Rachel is now a link in it. If she fails to follow the rules, Kylie will be killed. If the person whose child Rachel will kidnap fails to follow the rules, Kylie will be killed. Rachel will follow the rules. There is nothing she wouldn't do to protect her child and have her returned. This premise is what keeps The Chain going, and it is what will keep Rachel doing the impossible until the impossible goes deeper than the imagination can fathom.

The Chain is going to be on so many "Best" lists for 2019 that it might be interesting to make a list of the lists. I know it's already on my "Favorite Reads of 2019" list. Adrian McKinty has written what all authors dream of writing, an unforgettable book. 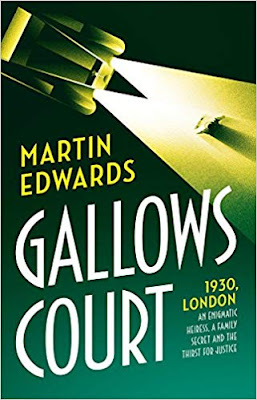 Martin Edwards is as close to the King of Golden Age Mysteries as one can get. His work with the British Library Crime Classics series has resulted in the most thrilling anthologies and introductions to the collections. Martin's non-fiction The Golden Age of Murder, which is a comprehensive study of detective stories between WWI and WWII, won the Edgar, the Agatha, the H.R.F. Keating, and the Macavity awards, in addition to being shortlisted for an Anthony and the CWA Gold Dagger for Non-Fiction. Becoming the eighth president of the Detection Club in 2015 put Martin Edwards in an elite small group of crime writers and experts, the likes of which include Agatha Christie and G.K. Chesterton and Dorothy Sayers. He is also the Archivist of the CWA and the Detection Club. Because apparently time is no obstacle for this prolific author, Martin has two contemporary mystery series he's written, too. So, who better to write this atmospheric, Golden Age style story of 1930s London than Martin Edwards. There have been some comments referring to the number of bodies exceeding the number in Golden Age stories, but that certainly isn't a detriment to the story of Gallows Court, in which the tale calls for multiple murders. The deliciously twisted turns through these murders are spun by a master storyteller.

Jacob Flint is a young journalist who is currently lead crime reporter for The Clarion. The manner in which he became the head of the paper's crime writing is one of the mysteries surrounding a rash of horrific murders in London. The former lead reporter was tragically hit by a car while pursuing the stories behind the murders. Jacob is sure that the scoop he's awaited lies with interviewing and gaining access to Rachel Savernake, the wealthy daughter of the deceased Judge Savernake, a judge known for his harsh reputation and his madness that lead him to live out his final years on an isolated island named Gaunt. Rachel has only recently left the island after her father's death there and returned to London where she has taken an interest in amateur detective work. Rachel herself has some questionable involvement and motivation behind this interest in the current murders and subsequent confessions of her father's former colleagues. She was given credit with untangling the connection of one colleague to the first murder, that of a young actress, and Jacob suspects she is the sender of a note sending him to the suicide scene of the next murderer, who beheaded his young victim.

While the suspense builds and the mystery deepens, there are brief glimpses into a period ten to eleven years earlier, a time when Rachel Savernake lived on the lonely island of Gaunt with her father and few others. The author interjects theses glimpses into the book through the chilling journal entries of one Juliet Brentano, a cousin of Rachel's who is the same age and is residing with Rachel and the Judge. Juliet's journal entries provide a scathing indictment of the dark side of Rachel Savernake and her cruel father, and the reader will think back on these descriptions when wondering what motivates Rachel in her current undertakings. It's the same sort of wondering that affects Jacob Flint in his dealings with Rachel. She is an enigma to him, but their paths continue to cross as Jacob digs deeper into a circle of evil that brings more and more danger to his door, quite literally. Gallows Court, where Judge Savernake and his associates occupied office spaces becomes another enigma to Jacob, one that must have its code cracked to ensure evil doesn't triumph. The villains are many and the good are few, so intelligence and craft are of the essence.

The dark, smoggy atmosphere of London and the isolated, bleak setting of the Island of Gaunt create the perfect storm for evil to creep about and inflict its devastation. Martin Edwards uses this perfect atmosphere to drop in the cleverly created characters who will battle to the death for their desired version of the world. Jacob Flint is the purveyor of truth in the story, although he has ulterior motives, in the beginning, of landing the big scoop to further his career. Jacob is intelligent, but gullible, too, so his manipulation by others is easily achieved. Rachel Savernake is a question mark. Is she good or is she an element from the dark side, too? She is the most interesting to me due to the unknown which is slowly unraveled about her. There are characters who are clearly on one side or the other, but there are characters who will surprise the reader. In short, it is a fascinating cast on a turning stage of events. The twists in the story are gasp worthy, exceeding any Golden Age mystery, but essential to this powerful story. Edwards weaves his knowledge of the Golden Age tropes throughout the tale to satisfy any reader who expects desires those. It is a brilliant example of writing within a period but somehow updating it to appeal to all readers. Gallows Court should be on the reading list of every reader who loves the best of crime/mystery fiction. I count it as one of my favorite all-time books, hitting all the right notes for me.