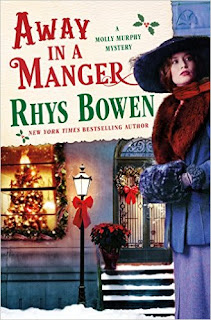 Away in a Manger by Rhys Bowen


I was especially thrilled when I learned earlier this year that there would be two Molly Murphy books out in 2015, The Edge of Dreams last spring and Away in a Manger this November. I truly cannot get enough of Molly, her family, her friends, and the city of New York City at the beginning of the 20th Century. Rhys Bowen has gifted readers with a Christmas story bonus that I wasn't able to wait until Christmas to read. Having been lucky enough to receive an ARC, I even got in a bit early before the November 17th publication date. This series is such a favorite for so many readers, and fans will be delighted with Away in a Manger. It's Molly at her detecting best, clever and resourceful with a maturing confidence in herself and her abilities. The author's meticulous research is evident in the historical details of New York City coming into a new century, where the newness of motor cars is in high contrast to the struggling problems of the immigrants, especially the untended children of the poor.

Molly is preparing for Daniel's mother, the other Mrs. Sullivan, to visit for the Christmas holidays, and while running errands with her baby son and twelve-year-old Bridie, two young immigrant children catch their attention. Under-dressed and obviously underfed, the two children, whose names are Tig and Emmy, are brother and sister out on the cold streets trying to earn money, as are many children at that time. First Bridie, then Molly are drawn to these children in particular, the very young Emmy with an angelic singing voice and the well-spoken Tig. They are not the usual children of the street encountered. So, Molly is pulled in by her heartstrings and Bridie's concern to see that Tig and Emmy have some warm clothes and food. It, of course, gets much more complicated, with the mystery of their missing mother and an "aunt" who isn't really an aunt, who lets them stay at her boarding house, but only at nighttime. Molly is determined to find out who these children are and what has happened to their mother, and her best friends Gus and Sid become involved and enchanted with the two beggar children. Molly's investigation will take her from the dregs of society to the upper echelon of it, and will reveal a dark, twisted plan of greed and heinous acts.

And, there is Christmas. Molly and her mother-in-law have never been completely comfortable with one another, and the Christmas that Molly hoped would show Daniel's mother how happy Daniel was with his family turns chaotic. Even the steady Daniel presents a major problem with which Molly must deal. There is much to do to save Christmas for everyone, the Sullivans and the two orphaned children, and a happy ending seems a desperate reach indeed. Much is at stake for many in Maggie's latest challenge.

Great characters, fascinating plot, and Christmas magic. Rhys Bowen never fails to deliver a fascinating, thrilling tale. This Christmas season she gives readers a gift that is sure to please.