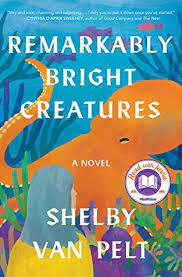 It seems that every so often a contemporary fiction book comes along that's not in my preferred mystery/crime genre, a book that touches my soul, connecting with me on a special level. Last year it was The Reading List by Sara Nisha Adams. The year before it was The Giver of Stars by Jojo Moyes. Others over the years have included The Girls by Lori Lansens, We Are All Completely Beside Ourselves by Karen Joy Fowler, Moloka'i by Alan Brennert, State of Wonder by Ann Patchett, Elsewhere by Gabrielle Zevin, and Whirligig by Paul Fleischman. The one I just recently read is Remarkably Bright Creatures by Shelby Van Pelt.

One of the main characters is a favorite creature of mine, an octopus. Marcellus is a giant Pacific octopus living at Sowell Bay Aquarium in Washington state. Tova Sullivan is a widow who started working the night shift to tidy up the small aquarium. The inexplicable bond between Marcellus and Tova is the stuff of reading magic. The connections in the coastal town of Sowell Bay don’t stop at this magical one, but it is this particular bond that opens up Tova to life beyond grief and readers to a beautiful story.

Tova is a widow of five years, but the loss of her son thirty years ago is what haunts her and defines her. She is retired and doesn’t need the money, but she does the nightly cleaning job at the aquarium to fill time, time which seems empty these days. Cameron’s mother walked out on him when he was eight and he’s never known his father. He is 30 years old and nothing in his life is settled, and he can be his own worst enemy. Both Tova and Cameron feel alone with their grief, but there are also some people who have been there as important support. Tova has her “Knit-Wits,” her group of several other women her age who get together once a month and on special occasions to share their lives. She also has the small grocery store owner, Ethan Mack, who watches out for her, although she doesn’t want to get too close to him. Cameron has his aunt, who took him in when his mother left and has his back when he needs her, and he has two long-time friends who are married to one another and care about what happens to Cameron. Marcellus was a juvenile rescue and then came to live at the aquarium after, but he dreams of being free and back in the ocean. He “can still taste the untamed currents of the cold open water.” A sixty-pound giant Pacific octopus, Marcellus seems a somewhat larger than that life force.

The chapters are divided into the three main characters’ stories—Tova, Marcellus, and Cameron, told from their point of view. Tova’s and Marcellus’ stories blend quickly as they develop their special communication. Tova is heading into the “golden years” of her life, which means some changes she’s not looking forward to. But, in Tova’s telling, there is never the sense of bitterness or self-pity. She lives in the house her grandfather built on Puget Sound, and the ghosts of those who are now gone are more personal history to think on than maudlin memories. Tova likes to stay busy, and working at the aquarium at night affords her that, with the relaxing bonus of not needing to interact with people.

Marcellus’ chapters start out with how many days into his four-year life span he’s lived, the first chapter being 1,299 days out of 1,460 days. Marcellus’ voice is my favorite, as his intelligence is underestimated by most humans, and you can hear his laugh at this in his witty, snarky thoughts. Marcellus shows his surprising agility and hidden cleverness when the people are absent from the aquarium at night, and I’ll leave that for readers to delightfully discover on their own. He’s a rascal, but he’s a loveable rascal. He shows us more than anyone that it’s not the number of days you have left but what you do with them that counts.

Cameron’s story starts in California, where his aunt raised him after his mother abandoned him when he was eight. He has trouble holding a job and navigating a romantic relationship. He ends up in Sowell Bay to confront the man he thinks is his father, but the man seems an elusive character to find. Cameron has a chip on his shoulder for some time, but when he comes to work at the aquarium when Tova must take time off for an injury, his life changes in ways he’d never imagined.

All the characters are some degree of lost in this book, including Marcellus. Or maybe, it would be more accurate to say they are stuck. That might sound like this story is a sad one and that the characters are hopeless, but that’s not at all true. The title of the book is Remarkably Bright Creatures, and I think it applies not only to intelligence but a bright, burning light inside each character that is still there, just waiting to shine. Being lost or stuck does not preclude positivity. In fact, in this story, the stubbornness of an inner core of hope compels the characters to not give up.

This book was such an exceptional experience for me. The title of the book, Remarkably Bright Creatures, is such an apt one, as the story is so remarkable, too. As I’ve already noted, I read mostly mystery/crime, but I occasionally try to fit in a few other fiction books, too. And, really there is some mystery to Remarkably Bright Creatures, as Tova still searches for answers to her son Eric’s disappearance from a boat on the Sound so many years ago and Cameron is searching for the dad he never knew. What’s an unexpected turn is Marcellus in the role of an unusual detective in discovering answers to the past. Remarkably Bright Creatures has been described as unique and heartwarming, and it is indeed that. It is also fierce, holding on when so much has slipped away. Marcellus steals the show and our hearts, proving once again how much animals have to teach humans. Remarkably Bright Creatures takes us through the struggles with love, family, loneliness, change, trust, loss, hope, and second chances, with Marcellus as our guide. This book is Shelby Van Pelt’s debut, an astonishing fact. I can’t wait to see what else she has in store for readers. 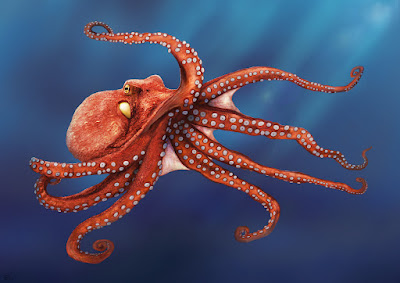