Notes on an Execution: A Novel by Danya Kukafka: Reading Room Review 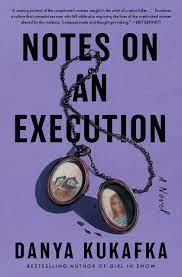 Pain.  Everywhere you turn in this book, you find pain.  It’s inescapable. Of course, with a title like Notes on an Execution, you shouldn’t expect warm and fuzzy. Some people’s lives begin in pain. Why do some come from that pain to be productive and caring, and why do others let their pain drive them to destroy? This is a book about a serial killer, but it is not a visit through the murders he committed. They are noted and there are some thoughts from Ansel Packer on his victims, but the focus is not on a description of the murders.  “What” isn’t the unknown factor here.  We know what was done and that he did. But, why did he do it and how did it affect those living who felt the shock-waves of his violence. There are always people left behind by the victims, people who grapple with its lingering sting.

Ansel Packer sits on death row for killing four women. It’s twelve hours until he will be put to death by the state of Texas on this day of his execution. The reader will be shown his sorry life, from birth to now, and Ansel will do his own reflecting, but the author has chosen three women who felt the impact of Ansel’s existence in their lives to tell the story of murder’s wide-reaching reverberations. One of the questions about a serial killer is how did he or she begin the journey towards killing. This book is far from an explanation or excuses of mitigating factors as to how the killer became a person who with a fair amount of ease could take life from another, but it is a close look at circumstances and choices combined. It is interesting to discover that Ansel is shown to have killed animals from an early age, a trait linked to serial killers. Ansel also came from an abusive home, which is often associated with serial killers. And, Ansel demonstrates in his current situation and his past actions the skill of fine-tuned manipulation. Whatever the causes and effects of murder, whatever makes a serial killer, it’s certain that murder doesn’t exist in a vacuum. The women who tell so much of this story could be said to represent Ansel’s beginning, middle, and end, but the line is not quite that linear.

The three women, whose stories intertwine with Ansel’s life, telling their connection to it, are survivors. They each have fought a battle of invisibility in the eyes of others and found a place of meaning in the world, overcoming both their physical and inner demons. Lavender, Ansel’s mother, makes a choice of how to end the abusive existence of her husband’s terror, trying to set her children and herself free to live a better life. But, in her endeavor to end the abuse, she abandons her children to a future of unforeseen consequences. Lavender doesn’t go back for her children and carves out her own place of safety and peace. Hazel is the twin sister of Ansel’s wife Jenny, and Hazel has seen the change between light and dark that pass over Ansel. She is also witness to the life her sister has found herself trapped in with a controlling and increasingly unpleasant Ansel. Saffy, whose mother died in her thirties, is also set adrift at a young age and finds herself in the same foster group home as Ansel.  Ansel had begun his descent into darkness by that time, and Saffy experiences a horrifying discovery of his rage she will never forget. Saffy grows up to become a homicide detective, and she is the first to suspect Ansel of murder.

Danya Kukafka has accomplished what every author strives to write and every reader longs to read. She has written a unique take on a subject. As a reader, when I can say I’ve never read anything quite like the book I’m reading, it’s a huge incentive for me to keep reading. In this instance, that subject is serial killers. Using the vehicle of the three women to balance out the killer’s reflections, there is a wholeness to the story that could not otherwise have been achieved.  And, seeing the totality of his existence, questions start forming about the possibility of Ansel Packer not becoming a serial killer if this or that circumstance had been different. Or are serial killers a psychological foregone conclusion? Is he a psychopath, born to the violent tendencies? Kukafka cleverly gives a push to the answer she seems to believe in some of Ansel’s actions as a young child, even before his mother leaves, and yet, maybe that's a bit of a red herring.

Starting the story at the last twelve hours before the killer’s time of execution gives an urgency to it. It's not a fast-paced book, but the reader knows that time is growing ever short for this person who has spread so much pain. Ironically, Ansel Packer is told that his execution will be painless. Knowing what awaits Ansel, the reader keeps turning the pages, looking for some redeeming part to this wasted life. Is there any? If he lives, might there be redemption, or does Ansel’s story begin and end with his narcissistic desire for people to understand and acknowledge him as above the fray of ordinary life. His inability to handle any criticism does not bode well for understanding or redemption. For me, the truth is that there is no redeeming part to him, and his desire to live longer is not so that he can be a better person, but so that he can be better understood as a unique individual. In the end, Ansel Packer is a killer who isn’t remorseful about the lives he took or the lives he forever changed, and I can’t see redemption without remorse. He killed four women with no thought of their desire to live and those who love them, and that demands a harsh judgement. The compassion belongs with those women.

And, yet, even after I come to this conclusion, I read back through the last chapter and think maybe there is remorse that’s not just about himself. If he’s a psychopath, there’s no question that he is beyond redemption. And, he is a psychopath, isn’t he? Isn’t he? I can’t get the words of one of the females in his life he grows close to out of my mind. She tells Lavender, his mother, that “Ansel had this idea …he talked about it a lot: the other worlds that might exist, if you changed just one tiny choice.” There's that "why" that tortures us so creeping out to play mind games with us.The author doesn't just keep the reader immersed in this story until the very last word of the very last sentence, she creates a debate within your brain that keeps going and looking for resolution.

Danya Kukafka’s writing has been described as lyrical prose, and I can’t argue with that description. She has a grand command of the language and uses it beautifully to convey story and points of thinking that the reader will be wrestling with long after the last page. Notes on an Execution is Kukafka’s second novel, following her 2017 debut entitled Girl in Snow. I intend to backtrack and pick the first book up to read, and I look forward to following her career. Danya is also a literary agent with Trellis Literary Management, which may explain the five year gap between books. With the success of her first two books clearly assured, I’m hoping she might bring out her next book sooner rather than later. I think readers have a lot of future enjoyment coming from the pen of Danya Kukafka.