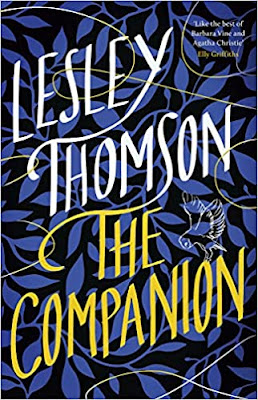 “By two o’clock in the morning, the storm had passed. The rain had stopped. The air was cleansed. A rational soul would easily attribute the constant dripping to water dropping from leaves, a creaking to an ancient bough that, battered by the tumult, would soon break. But this was the time when the ghosts roamed the honeysuckle-scented walks, lingered in the arbours and strolled around the fountain.”

Lesley Thomson has a way with words. That’s’ rather a simplistic statement for the mastery with which this author manipulates words into their most effective and spectacular use. But, saying that Thomson “has a way with words” is also absolutely spot-on. I like to think of her as the word whisperer. I could cite example after example from her new book The Companion, but I’ll suffice with one of my favorite phrases she uses, “an aural mirage.” Doesn’t that description thrill the word nerds amongst us and give the most apt description. Another example that made me giddy with glee shows how she turns the ordinary into something delightful to read, “so many occasional tables the name was ironic.” Of course, being a word artist needs a story artist to weave all those wonderful words and phrases into a captivating tale, and so how fortunate we readers are that Lesley Thomson is a masterful storyteller, too. Add intriguing, quirky characters and immersing settings, both of which elements I’ll mention again, and Bob’s your uncle, you have a book that you don’t want to stop reading but you don’t want to end.

The first book to feature characters Freddy Power and Toni Kemp was Death of a Mermaid. This first book brought Freddy Power back to Newhaven in Sussex, England after 22 years away. Toni and Freddy had grown up together as best friends, and now that Freddy seems to be staying in Newhaven, their friendship has been rekindled. Toni also had time away from Newhaven, as she served in the Met for some years. Death of a Mermaid was more Freddy’s story, but The Companion is more equally a story involving them both. Lots happened to Freddy in the first book that has resulted in her job as a fish monger, selling fresh fish from her van, and her living in her deceased mother’s house. Toni is settled in as a DI for the Sussex Police and is much respected for her detective skills, although she has a tiny little problem that surfaces when she’s stressed.

The action is swift and dark from the beginning of The Companion. A father and his son go off to fly kites on a Saturday afternoon and are brutally murdered, with no witnesses or discernible motive. DI Toni Kemp is assigned the case, along with her right-hand man Malcolm and their younger team members Sheena and Harry. With a dearth of evidence and clues, the deaths of James Ritchie and his son Wilbur will not be an easy solve, and they also won’t be the last murders. Toni and her team must eventually face the possibility of a serial killer.

Freddy, unlike Toni, has found her way back to religion, to the Catholic faith which the friends grew up with, as school and life were centered around it. In doing her fish mongering rounds, Freddy has met a resident of the impressive Blacklock House apartments, Rex Lomax, who is a retired, highly successful barrister. She has fallen into a pleasurable routine of taking Rex to church on Sundays. But, Rex announces that he has hired a “companion” to live with him, one Timothy Mew, who will take over the task of driving him to church. Disappointed, Freddy still has the interaction with the other quirky characters of Blacklock House in her delivery of fish to the residents, and it is through that she meets Timothy and his friend Martha, who owns a beauty shop and has more than one secret concerning a past and future murder victim.

Timothy Mew takes the job of companion to Rex Lomax as a steppingstone to the entitled life he has always coveted and felt he deserved. He considers it more of a genteel position, one in which he will be on equal footing with Rex, and the perk of driving Rex’s new Jaguar sweetens the pot. The introduction to Blacklock House brings the story and the murders to the country house atmosphere that is so Agatha Christie-like. Christie’s multifarious cast of characters in such tales as And Then There Were None and Murder on the Orient Express come to mind, as the reader meets the odd collection of residents in the once former grand Blacklock House. These quirky characters provide a myriad of suspects and secrets to be revealed. And, the name Blacklock House reminds us of Letitia Blacklock in Agatha Christie’s A Murder is Announced. There’s even a door that swings open as the lights go out in both Christie’s book and The Companion. Although there are quite a lot of characters in the story due to the residents of Blacklock House, Thomson has given them each a uniqueness that allowed me to easily assimilate them into the story and my memory.

Lesley Thomson is the complete package in mystery/crime writing. I’ve already noted her outstanding skills at making language shine. And, the plots that twist and turn to keep readers on their toes are full of the high octane suspense that fuels our thirst for thrills. Aiding that suspense in its effectiveness is that creeping air of sinister called atmosphere. There are some large and favorite atmosphere inclusions in this tale. Thomson expertly employs flashing lightning, pelting rain, loss of electricity, and even a screaming peacock to give readers a full-on dark and stormy night.

As this book is a police procedural as well as a country house murder story, the details of that aspect are important. The interviews conducted by Toni and her team, their research, and their gathering of evidence fascinated me. The use of social media by the victims is an interesting part of the police investigation into the murders. Clues to who these people were and how they might appear to a killer help broaden the story of how they came to be victims. The vulnerability of a person can too easily show through their posts on FaceBook. It’s an issue the author cleverly enfolds into the story, bringing the police procedural aspects into full contemporary form.

While The Companion isn’t listed as the second in a series and can be read with complete enjoyment on its own, I can’t imagine the reader wouldn’t want to read Death of a Mermaid as well. Of course, you can absolutely read The Companion first. I am quite smitten with the characters of Freddy and Toni, so I do hope there will be more of them to come. I highly recommend anything Lesley Thomson writes, and it comes as no surprise to me that The Companion is a solid choice for my favorite reads list this year. 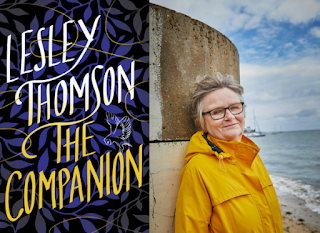