In Place of Fear by Catriona McPherson: Reading Room Review 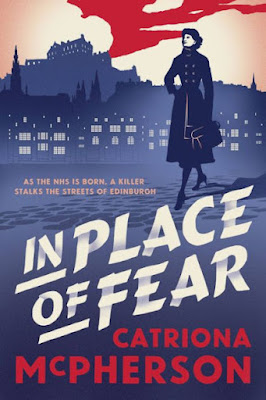 In Place of Fear by Catriona McPherson had me reading about a topic I didn’t even realize I wanted to read about, the NHS, or National Health Service, of the United Kingdom. I’ve heard how fantastic it is for those I know in the UK to obtain health care without worrying about what it costs. And, in reading this book, I discovered what it was like in its infancy. The disbelief of the UK’s citizens that their healthcare was free took some convincing. Those of us who are ardent fans of Catriona McPherson, and in particular her stand-alones, will experience a different kind of story in this book. In her previous stand-alones, the creepy factor has been fully engaged, but in this tale, the sinister is disguised as business as usual. And, of course, the cleverness is as evident as it always is in a book from McPherson.

The main character of the story is an “almoner,” whose job it is to get people signed up, to start a file for them where their health problems could be on record and their care could be better coordinated. Of course, paperwork and getting people signed up was only the beginning. Her job included providing nutritional information, pre-natal and post-natal care, ensuring people had proper housing, visiting patients in their homes to assess needs, and keeping the doctors she worked with apprised of her findings. She first, of course, had to convince those who couldn’t afford healthcare that it was free. So, readers will enjoy a well-researched piece of history told through the story of this almoner who is on the front lines of the NHS’s inception. However, this is Catriona McPherson, and readers will also get a first-rate crime/mystery as well.

Life is looking up for newly appointed Medical Welfare Almoner Helen (Nelly) Crowther in Edinburgh. Her new appointment means that she won’t have to follow her mother Greet and other women in her community to work in the bottling factory. Nelly’s father works in the slaughterhouse, and the family barely gets by. Their apartment houses Nelly and her husband, Nelly’s little sister, and Nelly’s parents. It’s a poor existence and one hard to climb out of, but Nelly was noticed by Mrs. Simpson at an early age and came under her tutelage. So, Nelly can work doing something she is passionate about. Greet is adamantly against Nelly taking the job, as there is that odd notion of not rising above one’s station prevalent in their community, and Greet objects to her working with two male doctors. Also, Greet thinks Nelly should be concentrating on getting pregnant and having babies, the normal course of their lives.

Nelly has been married two years to her school-days sweetheart Sandy when the story opens. Sandy had been a POW during the recently ended war and they were married when he returned home. He works as a street cleaner because he says he can’t stand to work indoors. There are problems between Nelly and Sandy, but with the new job has come a house of their own, so Nelly is hopeful that being out from her parents’ watch will solve her marital troubles. However, the move to their own home has a most inauspicious beginning. Nelly discovers the body of a young woman in the yard’s Anderson shelter, the lifeless form clothed only in a dirty hospital gown. The doctor declares it a suicide, but Nelly has seen the body up close and is convinced that death was at the hands of another. Thus starts Nelly’s personal investigation and vow to discover who the young woman was and how she died.

One of the overriding themes in the book is women’s health, especially having or not having babies and the care for both. Choices were mostly in the hands of men what happened there, and it couldn’t be a timelier theme. Nelly is the outlier in 1948, loving her job and the independence that came with it. Through Nelly’s cases she works, McPherson does a great job of taking us into the lives of the underprivileged (impoverished) Edinburgh women in the years after WWII. And, the marked distinction between the poor and the rich is all too evident in how lives are lived and problems are handled. The lines of social class are just beginning to blur after the war, and Nelly represents that force of change that is coming. She isn’t content to conform to the traditions of her poor community of repeating one’s parents’ lives. She wants something of her own and isn’t afraid to fight for it. She has a voice and uses it. By the end of the story, readers will understand just how unconventional Nelly is for her times.

In Place of Fear is an historical fiction murder mystery, but I think that even in the murder mystery part, the historical takes precedence. Well, it’s probably more accurate to say the two aspects of the story depend on one another. What happens to the victim and the coverup afterwards is a part of women’s history, what it was, what we were able to change for the better, and the threats that still exist to women’s health. I enjoyed the mystery, as it had me guessing until the end, and I always enjoy being proved wrong about who I think the villain is, and, of course, if not for the investigation into the woman’s death, the unsavory history would not have been uncovered. But, for me, the history in the mystery and the history in the rest of the story is what was so powerful.

A quick word about the Scottish dialect used in the dialogue. I enjoyed it because I love hearing people talk who are from Scotland, like Catriona McPherson. I think there was just enough though, as a whole book of it might have been distracting instead of enriching. I’m familiar with a lot of the words, so I only looked up a few. There is a handy glossary at the back of the book if you’re not familiar or you can’t understand the word through context clues. I think the choice of characters whose conversations use the dialect, Nelly and Sandy and Greet and others in their social circle, adds to the authenticity of their street cred and brings the readers into their world.

Catriona McPherson has given us yet another fascinating narrative in which to immerse ourselves, continuing her brilliance in unique storytelling. Thanks to NetGalley and Hatchette Book Group for an advanced reader’s copy of In Place of Fear.