I've decided that one of the best ways in which to share all the amazing authors and their works is to have a continuing Author Spotlight feature.  It will not be a biographical post, but instead it will be about a particular book or multiple books written by that author.  In short, the posts will be about the authors' books, although I won't hesitate to include an interesting tidbit or two about said author.

The first author up is newcomer Elisabeth Elo, whose debut novel North of Boston I just finished reading.  I was held captive from this book from the atmospheric cover to the last page of thrilling content.  Pirio Kasparov, the main character, is as interesting a character as her name suggests.  Elo is definitely an author I want to keep a close watch on as her career and writing continue.  Below is my review of North of Boston. 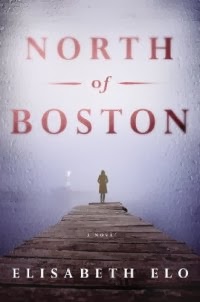 It's hard to believe that this book is Elisabeth Elo's debut novel. The story is quite unique, and the writing flows with an even pace. There are many aspects of this story that appeal to me, with the name of the main character, Pirio Kasparov, leading the way. Character development seems to be a particular strength with Elo, as Pirio and all the supporting cast are given a thorough treatment of background and how they have all arrived to be a part of the events that unfold. I admit that I wasn't sure where the author hoped to go with the initial mystery of what caused the accident to the lobster boat that resulted in one death and Pirio's miraculous survival. But, then, as with all captivating stories, the layers start to be peeled away, revealing so much more than just an unfortunate boating accident. Elo introduces the characters in the progressive drama at just the right times, and brings out the nasty secrets of those who will stop at nothing to get what they want when they want it. So, a boating accident becomes murder, and Pirio Kasparov becomes an indefatigable pursuer of the truth and champion to a cause that she wasn't even aware existed before she defied the odds and survived four hours in 48 degree ocean water. Pirio has defied the odds before, though, as she overcame a troubled, if privileged childhood, and landed in life as a responsible thirty-year-old woman, who must be a stable force in the life of her unstable friend's son and is the heir-apparent to a prospering perfume business. After the funeral of her friend Ned, who was owner of the lobster boat and killed in the accident/murder, Pirio connects with two men at the bar where mourners gather. One is a former boyfriend and friend of Neds, a boyfriend whom she hasn't seen in years and who is now married with children. The other man, a stranger to Pirio, engages her in talk about Ned and the accident, and he later poses as an insurance investigator. Neither man is what he seems and both will play a significant part in Pirio's attempts to find out what really happened the night she and Ned were hit by a freighter. The author knows her way around the fishing industry and the ships that participate in it, and she takes the reader on a learning journey of legal and illegal practices of that industry. Pirio begins her search for answers in Boston, but she must travel to the Canadian Artic and her childhood past to unravel a crime most heinous.
Posted by Kathy Reel at 2:48 PM