Today I am honored to be a part of the Great Escapes blog tour for Anna Loan-Wilsey's upcoming novel, A Sense of Entitlement, out on June 24th.  I was fortunate enough to receive an advanced reader's copy, so I have already read and reviewed this historically fascinating mystery.  This book is the third Hattie Davish mystery, a series that started strong and is maintaining its excitement and excellence.  As a traveling secretary in the 1890s, Hattie Davis finds herself in some intriguing historical settings where murder seems to wind its way into the lives of the people who employ Hattie.  With a level head and an instinct for detail, Hattie proves far more than a capable secretary.  A special treat from Ann Loan-Wilsey is the announcement at the end of the interview questions of the title of her fourth Hattie Davish book now under construction!

A Sense of Entitlement by Anna Loan-Wilsey


Already a committed fan to the Hattie Davish series after book #2, Anything But Civil, proved that Anna Loan-Wilsey cemented my addiction/committment, the third book continues to affirm the series' excellence.  In my review of the second book, I spoke of the meticulous research and attention to detail that assures readers of an authentic, fascinating read in these novels set in the mid 1890s. I feel it is worth repeating here, in case that review has not been read. "There is no doubt that the author writes from a wealth of intelligence, meticulous research, and grand story-telling skills. Ms. Loan-Wilsey spins a fascinating murder mystery with immaculate attention to the minute details of a crime. Her amateur detective, Ms. Davish, is a traveling secretary by trade, but her intelligence and diligence propel her into realms normally beyond her station in life in the late 1800s when she is called upon to solve crimes connected to her assignments. With both of the current books in the series, the reader learns along with Hattie more about particular areas of history that affect her world of 1894. And, it is those gems of learning about an event and place in history that aren't in the forefront of history books. For those who love their mysteries combined with these delicious tidbits of history, Anna Loan-Wilsey's novels will definitely tickle your fancy."

The piece of the 1890s brought to life in A Sense of Entitlement is the summer season of the rich elite in Newport, Rhode Island.  It is the place where the Astors and other top society have their summer cottages, which are in reality grand mansions only used six weeks out of the year. Hattie arrives in Newport as a part of Sir Arthur Windom-Greene's entourage.  Sir Arthur has employed Hattie or recommended her to others as a traveling secretary since she first began her occupation.  However, immediately upon arrival, Sir Arthur is called away to tend to his ailing father.  Sir Arthur's wife, Lady Phillippa, is anxious to pawn Hattie off on someone else while he is gone, so she arranges for her to work as a social secretary for Mrs. Charlotte Mayhew.  It doesn't take long for Hattie to realize that the high society families are rampant with secrets and conspiracies.  With the appearance of the first dead body, Hattie is once more thrown into a world of detecting the truth from deception.  To complicate matters, there is a labor agitator in town trying to stir up support for fair labor practices and greatly annoying the rich employers, including Hattie's.  Everything becomes of importance in determining a murderer, and the police aren't eager to rock the boat of the upper classes.  Hattie is her usual competent self, but she must deal with the prejudices and demands of people who think they are above the law.  Of some comfort to Hattie is the presence of her two older lady friends, Miss Lizzie and Mrs. Lucy, but even that comes with a cutting edge.  Dr. Walter Grice, who has shown interest in Hattie since her first adventure in Eureka Springs, Arkansas, has a mother named Julia Grice, and Julia is staying with the sisters Lizzie and Lucy in Newport.  Mrs. Grice has plans to match her son up with a girl of the right "station" while in Newport, not a traveling secretary.

Anna Loan-Wilsey has created a series that gives the reader an authentic look into the world of the latter nineteenth century,  encompassing all the constrictions of that era, but also a nod to the progress coming in the new century.  It's a step back into a history on the cusp of change, and Hattie Davish is part of that exciting change. 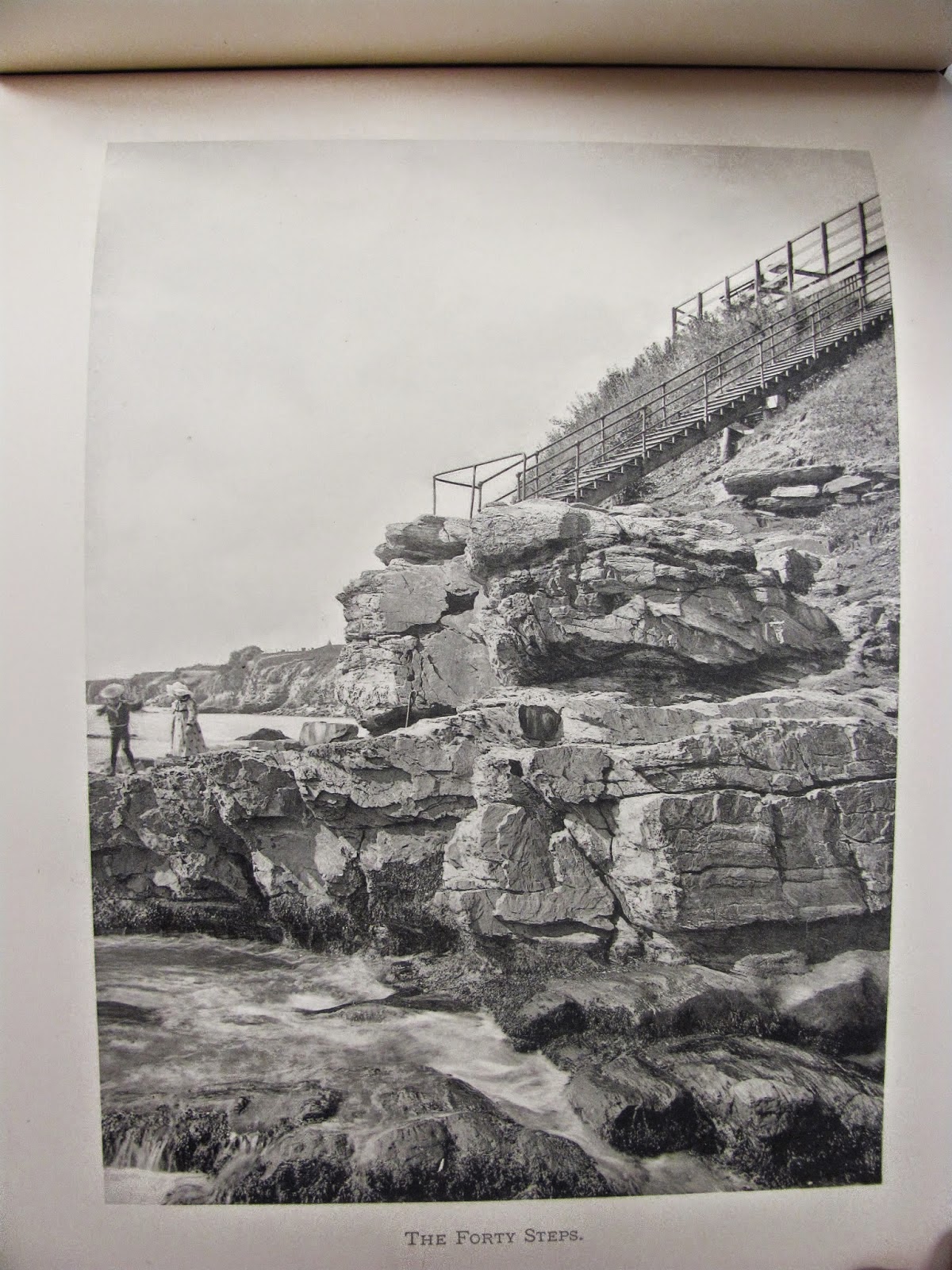 Forty Steps- another 1895 photograph of the 40 steps, a location that figures prominently in the story.  The current 40 Steps is made of stone and looks very different.  I found this photograph to be invaluable for historic accuracy.


Interview with the Author


Anna, I know that you do a lot of research for each novel, and I’d like to ask you a few questions about that.  I think most of your readers realize that you have had to actually visit the locales of your novels, but it’s obvious your research extends beyond that.  In reading your blog, you have in your “tidbits” section some very interesting information from your research, which I encourage all to view.  So, for the questions. What are different resources you employ?  What do you look for beyond the historical events of each novel?  Are there any unique methods of research that you’ve done?   How long do you usually spend in the book’s location, and what is your usual pattern there?

As you mentioned, the first thing I do is visit the book’s location.  I usually spend 3-4 days there walking the streets, photographing the architecture, and combing the library’s archives, local book collection, period newspapers and appropriate city directories.  I literately spend every waking moment trying to soak up the atmosphere, the attitude and the history of a location for as long as I can. I discovered on my second research trip, that my digital camera was my best friend.  Instead of spending time printing up articles from microfilm or jotting down names from a city directory, I photograph everything.  Not only does it save me time, I also capture extra material that I can use later. When I return home, I use Interlibrary Loan from my library for text I need and the internet to fill in the gaps I missed while on location.  One excellent resource is the NY Times Archives Online. And of course, I have a library of reference books I use with every book.

How did you come up with Hattie as a traveling secretary in the first place?  Where did your interest in this career path for your leading lady come from?

I needed a viable profession for a woman from the 1890’s that could also move about.  Lady “typewriters” were becoming common in this era but most worked in typing or steno pools.  By making the leap from typewriter to private secretary (which although a common profession for men was not so much for women), allowed Hattie to travel to or with her employers.


What made you choose the particular period of time, the late 1800s for your time setting?

Since I can remember I’ve loved the late 1800s.  I live in a house built in 1892, complete with a parlor (with Eastlake furniture), a library (with a bust of Louis Agassiz, and a dining room with Bradbury & Bradbury wallpaper.  The decorative details and the gentility of the era are appealing but as a writer the era is wrought with social, technical and politic change that is just waiting to be included in a mystery.

Apparently, you have quite a love of baseball, as you have some interesting facts about the early days of baseball on your blog.   I did a little reading on the beginning of baseball in the United States and found that “The earliest known newspaper account of a Baseball game in the United States was published on September 11, 1845, in the New York Morning News, which announced a game that occurred the previous day. The first recorded Baseball game was played on October 6, 1845 at Elysian Fields, in Hoboken, New Jersey by fourteen members of the New York Knickerbockers Club.” (http://www.19cbaseball.com/game.html)   The sport starts to really get interesting in second part of the 19th century and moving toward Hattie’s time.   So, I’m wondering if you intend to incorporate that sport into one of Hattie’s adventures in a future novel?

I’m thrilled that you noticed.  I’m a huge baseball fan and as it happens so is Hattie.  I have attempted to incorporate baseball into every novel with little success.  Newport was actually a promising location since they have one, if not the, oldest ballpark in the country.  Unfortunately I discovered it wasn’t officially used in 1893.  But I’m trying again with my next novel so cross your fingers, I don’t have to edit it out!

Anna, you blend the historical fiction with the murder mystery so smoothly.  Which were you first interested in reading when you were growing up?  Or, were you interested in non-fiction history?

I loved history growing up (my father owned an antique store and my house was filled with them) and my mother is a self-taught Napoleonic scholar but I was definitely reading mysteries long before I read historical fiction.

Continuing with your reading habits as a youth, do you have a favorite book or two that have
stayed with you?

My mother’s copy of Agatha Christie’s Pocket Full of Rye was the first cozy I read (in one night I might add) and I haven’t looked back since!  On the flip side, I’d read J.R.R. Tolkien’s Lord of the Rings three

And, of course, I have to ask about the next Hattie book after A Sense of Entitlement.  Can you give readers any information about where Hattie will find herself on her next assignm

I’m excited to say that Hattie’s next adventure is one of a more personal nature-she goes home to the bustling Missouri River city of St. Joseph, Missouri, birthplace of the Pony Express, site of Jesse James’ violent end and home to Mrs. Chaplin’s School for Women, Hattie’s alma mater.   And just for you, Kathy, I’d like to reveal the title for the first time anywhere- A DECEPTIVE HOMECOMING.