Entry Island by Peter May, Out Today 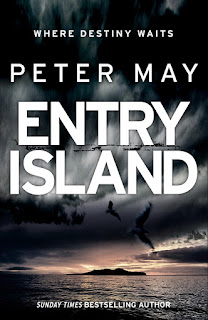 Last year, I had the honor of being chosen as a Peter May Super Fan in a contest.  With that honor came the responsibility of touting Peter's books, which is like being asked to eat cake to show that you appreciate sweets.  Absolute pleasure.  As an ardent fan of The Lewis Trilogy by Peter May, I approached reading his latest book, Entry Island, with much curiosity and a little concern.  I thought Peter's writing so brilliant in The Lewis Trilogy with its setting on the Isle of Lewis in Scotland, but Entry Island was set in the Gulf of St. Lawrence, Canada, which is a perfectly fine setting, just not my favorite of Scotland.  Of course, I should have realized that a brilliant writer isn't confined to any one setting or story.  Entry Island was as thrilling an adventure as I could possibly want, and the setting was deliciously and perfectly chilling.

So, to properly tout Peter May and his writing, I'm posting my review for Entry Island, and ATTENTION!  I have three copies of Entry Island to give away, part of my reward for being a super fan.  It is a great place to start with reading Peter May, who is a master storyteller of shadows and secrets and mysterious deaths.  Just comment to be entered to win Entry Island.

A note about the publication dates.  Entry Island is the latest publication of Peter May's in the United States, but it was published in Great Britain in 2014 and is the winner of the Deanston Scottish Crime Book of the Year 2014. Today is the U.S. publication birthday for Entry Island, and so we celebrate its arrival from across the pond.  Peter's book Runaway, a standalone, was released in the U.S. in May of this year, and it is next on my list by which to be amazed. 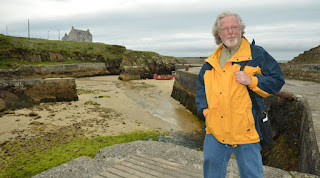 From Peter May's Web site:
"Peter May is the multi award-winning author of:
He has also had a successful career as television writer, creator, and producer.  Born and raised in Scotland, he lives in France."

Entry Island by Peter  May


Peter May's The Lewis Trilogy books rate among my favorite reads in the past few years, so it is with great anticipation of enjoyment that I began Entry Island.  I was not disappointed.  Peter May is simply a master at telling generational stories, with the connections to past and present being one of the most fascinating mysteries to decipher.  There is the intriguing murder mystery, too, but it is a deliciously layered one with the events of the past coming into play.  And, those fans of The Lewis Trilogy will be well pleased that the mystery of Entry Island in the Gulf of St. Lawrence has its beginnings on the Isle of Lewis in Scotland.  So, blackhouses and windy hilltops and sandy coves in a previous century are part of the present-day story.

Entry Island is a remote island in the Magdalen Island chain in the Gulf of St. Lawrence, and a murder has occurred on this island, where crime is unheard of and doors always left unlocked.  Detective Sime Mackenzie of the Montreal Surete has been assigned to the team traveling to the islands because of his fluency in both English and French.  Entry Island is English speaking in a country where English and French languages have claimed different and often adjoining areas.  It will be Sime's job to interview the widow of the slain man in a case that on the surface appears to have an easy solution, that of wife killing husband.  But complications arise in the very makeup of the team sent to investigate, as Sime's ex-wife is the crime scene investigator.  It is the breakup of their marriage that has produced a less than full functioning Sime, a Sime beset by chronic insomnia.

From the very moment that Sime meets Kirsty Cowell, the victim's wife, a surreal sense of deja-vue colors his part in the investigation.  He knows that he has seen this woman before, but he has never been to Entry Island before, and Kirsty Cowell has never been off of Entry Island.  Kirsty's recounting of the attack that left her husband dead is of a knife-wielding intruder clad in dark clothing and a ski mask first trying to kill her and her husband rushing in to fight off the assailant. James Cowell is stabbed three times and the killer runs off into the night.  With no evidence of a third person and no murder weapon, the attention focuses on the wife as the main suspect, and information starts leaking out about the Cowells' marriage being in trouble. With James Cowell having been a most wealthy man, the Surete team thinks it has an open and shut case.  But, Sime isn't convinced that Kirsty is guilty, and he begins to have dreams in his brief periods of sleep that come from another century and his great-great-great grandfather's journals that seem to bear relevance in a peculiar way to the current circumstances.  The dark atmosphere of the storm laden weather mirrors the darkness that Sime must sort through if he is to find a definitive answer to both this murder and his strange connection to it.  The path to that answer also includes a look at the historically accurate clearing of the Hebrides in the 19th century, where lords of the land drove people from their blackhouses and onto ships headed for Canada.

Peter May is a brilliant writer, creating atmosphere and story that creep into your mind and under your skin until you truly feel a vested stake in the outcome, too.  May's books are complex, layered accounts of people grappling with a past and unable to proceed with the present until coming to terms with that past.  The characters, the settings, the flow of story are all done with the touch of master storyteller.  Reading Peter May books is always a thrilling experience.

View all my reviews