Heart of Stone by James Ziskin: The Reading Room Review 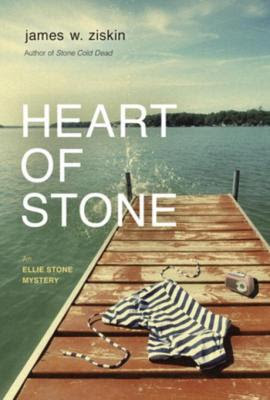 Heart of Stone may be the best yet in the Ellie Stone mystery series.  I’ve been an enthusiastic fan since the first book, Styx and Stone, and James Ziskin deftly continued the story of my favorite twenty-five-year-old reporter in the next two tales.  This fourth entry is special to me because the very first page gobsmacked me with gorgeous writing that I had to read several times before I continued on with the book.  When students study creating atmosphere in writing, they should study this page.  The woods become alive and you will gasp and declare that it is the stuff of your childhood nightmares.  Don’t misunderstand.  James Ziskin’s previous three books are wonderfully written with language, story, and character that are amazing.  Heart of Stone just made me catch my breath.  To be reading a murder mystery with a fierce character and have the language take you to a level of euphoria is like wishing for a cake and getting one made by Ace of Cakes.  There are layers of delicious that you never anticipated.  The combination of all the ingredients is electric.   Bold, well-developed characters; suspenseful plot that twists and turns unexpectedly, but in a natural unfolding; and voice that beguiles.  Damn, you’re good, James Ziskin!


Set in the early 1960s, 1961 to be specific, Ziskin doesn’t miss a beat with the trappings of that period.  And, yet, he gives us the irrepressible Ellie, who defies the expectation of females at the beginning of a decade when change was coming to so many areas of the world and life.  Ellie is ahead of her time, but symbolic of the path ahead.  One of the most impressive aspects of this series is how James Ziskin, a man, writes from the viewpoint of Ellie, a woman.  As if undertaking the setting of the 1960s isn’t enough, the author must be the voice of a female protagonist and get that right, too.  Well, get it right he does, and there is never any question of authenticity of setting or character.


In Heart of Stone, Ellie is on vacation from her newspaper reporter job in New Holland, New York.  She has joined her aunt Lena and cousin Max for an August holiday at Lena’s cabin on Prospector Lake in the Adirondacks.  Familiar to Ellie from her childhood days with her family here, it’s a spot that promises relaxation and a rest from her constant struggle for respect at the newspaper.  Enter two dead male bodies, one mid-thirties and one seventeen, at the bottom of Baxter’s Rock diving point, and add Ellie’s immediate involvement, and you have no rest for the curious.  Having a camera, her prized Leica, Ellie is commandeered into taking pictures of the death scene by the bumbling, obnoxious, and highly creepy chief of police, who wants to wrap up the incident as an accident as quickly as he can.  But, Ellie feels the scene is wrong, something is off, starting with why a thirty-something man, who has no identification, and a seventeen-year-old boy from a nearby music camp ended up at the same time on the rocky shore beneath a known danger spot.  One of the best attributes of a good reporter is a dogged commitment to finding the whole story and the truth, and Ellie is the proverbial dog with the bone times ten.

In addition to the death investigation that Ellie is bent on continuing, she becomes reacquainted with some friends from her childhood who are ensconced at Arcadia, a nearby community of Jewish intellectuals and artists.  Of particular interest is Isaac, with whom Ellie makes an immediate reconnection and current romantic attachment.  We know that our intrepid reporter has a healthy attitude toward sex, something that the 1960s would become known for.  However, book four introduces a vulnerability that we haven’t yet seen in Ellie’s emotions.  Her relationships with Isaac and her aunt and her cousin provide readers with a satisfying look at a support system for her heart and a journey for Ellie to knowing herself better.  The other Jewish friends with whom Ellie reconnects are an interesting, quirky group that includes an outspoken communist and an enigmatic musician.  Ziskin does an amazing job bringing these characters to life and addressing issues of the day through them.  And, not surprisingly, the Arcadia community plays an important part in what Ellie has determined is the murder of the two men who fell from Baxter’s Rock.


Ellie has her work cut out for her in slogging through all of the different suspects and scenarios in trying to piece together murder, motive, and opportunity.  Distractions such as an escaped murderer from a prison and John Birchers voicing their fanaticism add to an atmosphere of fear and volatility.  Secrets and deceptions run amok, but not without purpose, providing twists that keep the reader guessing to the end, and that end is spectacular.  Heart of Stone is absolutely a thrilling, scary, delightful mystery that has as its star one of the wittiest, most resolute, most curious of heroines.  Sometimes she drinks a bit too much and sometimes she is reckless in her pursuit of the truth and sometimes she makes a bad choice in a bed mate, but Ellie Stone keeps it interesting, always.
Posted by Kathy Reel at 11:21 PM