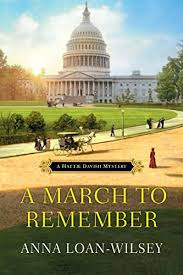 I was given a copy of A March to Remember by the author, but it in no way influenced my opinion.
Posted by Kathy Reel at 4:26 PM