Smoke and Mirrors by Elly Griffiths: My Review 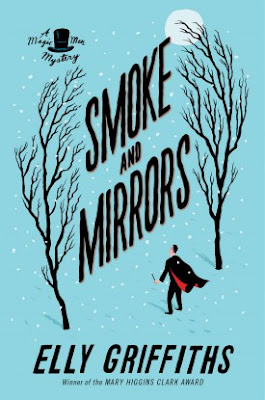 Smoke and Mirrors is the second book in the Magic Men Mysteries, following the successful The Zig Zag Girl. This second entry seals the deal for me that Elly’s new series is another favorite. As an ardent fan of the Ruth Galloway series, I started this new series with a bit of trepidation. Could I really love another series by this favorite author as much as the first? Well, apparently, the answer is an unqualified yes. The smooth writing, the great plotting, and the fascinating characters whose depths are ever growing. It’s all there in the Magic Men series, also known as the Max Mephisto/Edgar Stephens series.

The setting is Brighton, England in 1951, and the Christmas season has begun. But, there is little to be jolly about after two children disappear on their way to a sweet shop and are found dead in a fresh snow two days later, a trail of candies/sweets leading to their bodies. Mark and Annie, ages 12 and 13, had been best friends, growing up on the same street, and both having an interest in writing plays and the theater. Annie’s writing leaned toward a dark, twisted style, with a startling retelling of Hansel and Gretel and an original, though steeped in folktale traditions, script entitled The Stolen Children. It falls to Detective Inspector Edgar Stephens and his team of DS Emma Holmes and Sergeant Bob Willis to determine who would have motive to kill these bright, creative kids just beginning their lives. There seems to be no shortage of leads to follow up and people to investigate and more than a few red herrings, but with a crime of this magnitude and brutality, no stone can be left unturned, and Griffiths leaves no loose threads when the resolution is revealed.

And, there is the theater connection, which leads Edgar to the pantomime performance of Aladdin at the Palace Pier Theater starring his friend and fellow WWII veteran, Max Mephisto. The current murders have eerie similarities to a 1912 pantomime performed in Hastings where a fifteen-year-old girl was killed right before she took the stage in Babes in the Wood play. One of the performers in the current pantomime had been one of two who discovered the body of that girl in 1912. Max gives Edgar insight and access to the theater world that would have been a closed community otherwise, and Edgar needs all the edge he can get in a case where make-believe is all too real.

The 1950s is an interesting, but challenging era to write about, but Elly Griffiths uses her resources well to recreate Brighton after the horrors of WWII, but still showing its effects in rationing and the all too fresh memories with which Edgar must deal. Edgar and Max have the bond of serving together in the Magic Men assignment during the war, and it has given them both a basis for a friendship and a way to cope with their past. The boundaries of what are socially and legally acceptable sexual relationships in Brighton and England in this pre-war decade surface, too, within the theater cast. And, there is still a matter of class divisions long after WWI started to change those. But, one of the most fascinating aspects of the book is the peek into the world of the English pantomime play of the 50s, with its double entendre and the fluidity of gender in roles.

Characters are one of the outstanding features of Griffiths’ writing that give it depth and provide the reader with exceptional enjoyment. Major characters, such as Edgar and Max, are expected to be well developed, with each book adding to their background and connection. But, Elly Griffiths, as she does in her Ruth Galloway series, gives incredible attention to detail in her minor characters, too. Emma Holmes is a sign of times to come with her smart, dedicated police work and her ability to succeed in what is still very much a man’s world. The Great Diablo brings his larger than life personality to the cast of the play and the cast of the book. Ruby, Max’s daughter and Edgar’s love interest is becoming a more clearly recognizable player, as her ambition becomes more apparent. Even the dead children are characters we feel we know and, thus, lament their deaths even more.

Elly Griffiths just received the Crime Writers’ Association Dagger in the Library for 2016, a prestigious award for her whole body of work thus far. It comes as no surprise to those of us who have read her books for years and enjoyed the consistency of excellence she always produces. Her stories continue to be one of the best highlights of my reading year.