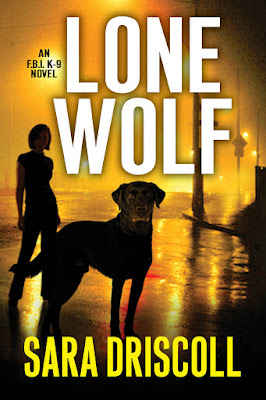 A new crime series is an exciting event, and when it expands one’s horizons in the genre, it is especially a great find. Lone Wolf by Sara Driscoll is the first in the F.B.I. K-9 novels and features F.B.I. Special Agent Meg Jennings and her black Labrador search-and-rescue/tracking dog named Hawk. Using dogs to help recover and/or discover during a crime investigation is an area with which I was not familiar and an area that has not been overly covered in the mystery/crime genre. Lone Wolf does an excellent job of bringing these dogs and their handlers to the light of day. The team of handler and dog are fiercely devoted to one another and must be able to depend on each other in life and death situations. The author does a superb job of describing the emotional bonds of handler and dog, as well as the physical training required. The use of a defined search-and-rescue term at the beginning of each chapter in the book helps acquaint readers with the jargon used in this function of search-and-rescue. The characters are fresh and interesting including the canine ones, the plot is all too plausible in our world today, and the story unfolds in a chilling atmosphere of well-measured suspense.

Fear has gripped the nation’s capital as a domestic terrorist is targeting government buildings and departments which he feels have wronged him and ruined his life. The modus operandi is homemade drones, packed with C-4 for maximum damage and loss of life. Meg and Hawk are drawn into this nightmare investigation as the first drone demolishes the Department of Agriculture building on a day that school children are visiting and directly in the bomb’s path. Survivors must be found in a crucial window of time, and the FBI K-9 unit is an integral part of the search and rescue effort. Meg and Hawk and the other canine teams work throughout the night locating those who clung to life amidst the hellish chaos.

The perpetrator soon shows that he is an angry American with axes to grind and no regard for human life, as he sends an anonymous email to Washington Post reporter Clay McCord indicating that there are more bombings to come. The next target is outside of D.C., and Meg and Hawk are once again called in with the other first responders. With a home-grown terrorist who shows no signs of stopping his attacks to kill and maim, Meg enlists the aid of McCord to do some private investigating into finding this madman before the death and destruction paralyzes the nation with uncontrollable panic.

I think that Jen Danna and Ann Vanderlaan, a.k.a Sara Driscoll, have found a niche in crime fiction that the FBI K-9 series fills quite nicely. I look forward to the minor characters, Meg’s fellow dog handlers and the newspaper reporter and the hint of a romantic interest for Meg all being fleshed out more. To me, that’s one of the beauties of a series, each book adding more background and more character development. There is lots of potential for this series to be a popular one, and not only for dog enthusiasts.

I received an ARC of Lone Wolf, but it is a definite hardback buy for me, too.
Posted by Kathy Reel at 2:52 AM