Strangers in the Attic: A Halloween Tale by Catriona McPherson

Halloween is my favorite time of year.  The leaves have all changed colors, there's a crispness to the air, the Halloween candy over-floweth, pumpkins and goblins and ghosts and witches and bats are everywhere, and scary stories are read with a special apprehension.  I have old favorite stories, like "The Legend of Sleep Hollow" by Washington Irving and Halloween Party by Agatha Christie , and I have new ones that are absolutely, wonderfully chilling.  My favorite new scary read this year is Strangers at the Gate by Catriona McPherson.  I'll be posting a review for it the first of next week, but let me just say now that it might be my favorite book by this brilliant author, and that's saying a lot because I love everything I've read by her.  I highly recommend Strangers at the Gate for your Halloween read this year.   It will be this coming Tuesday, Oct. 22nd, so there's plenty of time to pre-order it still and read it by the fire with the lights turned low.

And, now for a special treat, before Strangers at the Gate comes out, Catriona has written an account of her own spooky encounter in "Strangers in the Attic."


Strangers in the Attic by Catriona McPherson


It’s lovely to be back in the Reading Room. Thank you for having me, Kathy. And thank you for asking me to write a spooky blog for this spooky month.

Strangers at the Gate has some shivers and jumps in it – or so people are saying (thank you!) – and I certainly made myself freak out now and then as I wrote it, all alone in an isolated house up a dirt road, with just a black cat for (slightly ironic) comfort. 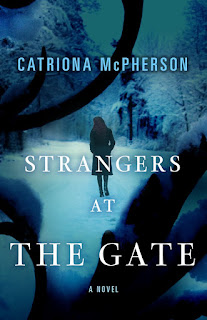 But it was nothing compared with the worst “all alone in an isolated house with only a cat” freak out. Gather round, closer to the firelight, and I’ll tell you . . .

In Scotland, we lived in  creaky old farmhouse in a valley, with no other houses in sight. There were no lights at all visible from our windows after dark, just trees and black sky. And my husband travelled a lot, so I was alone there much of the time. I read Stephen King there, slept with the windows wide open, never worried about anything much. Until the night I decided it would be a good idea to watch Panic Room. 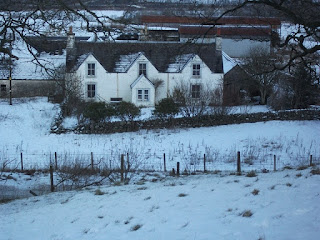 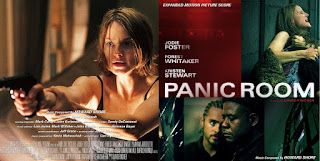 There I was watching Jodie Foster slowly realize that there were intruders in her house, when all of a sudden both cats sat bolt upright, ears back, and stared at the living room door. Then they slunk down off the couch and went creeping along the corridor, bellies close to the floor.


I followed them. When I got to the kitchen they were peering round the door that led through a back hallway to the old dairy – a place of peeling paint, crumbling plaster and cobwebs. Together the three of us made our way there and looked around. Or should I say, around and up? Up the ladder that led, via a trap door, to the cheese loft. 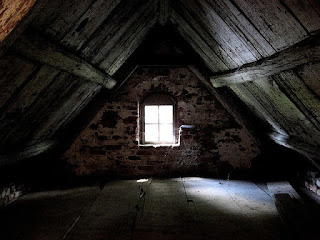 Now then. I could have got my car keys and driven forty miles to check into a hotel. I could even have walked straight out the back door and gone along the road to the nearest neighbors. I could have phoned my husband, or a friend, or the cops. But all of these plans included me having to say “Funny coincidence. Hahaha. I happened to be watching Panic Room when I realized there were intruders in my house too!” And then I’d feel like a chump and never hear the end of it.


What would you have done? Left the house? Gone up the ladder? Finished watching the film? Or would you have done what I did, which was as follows: switch the telly off, get the two fire pokers from beside the living room fireplace, go to bed and try to stay awake, planning – when “he” came down the ladder and crept through the house to find me – to throw a poker at him across the bedroom. Then, I thought to myself, he’d think I was defenseless, on account of how in most households pokers come in units of one, like kettles. So he’d advance, cackling maniacally with his eyes glowing red, and I’d bring the other poker out from under the covers and clobber him to mush with it. 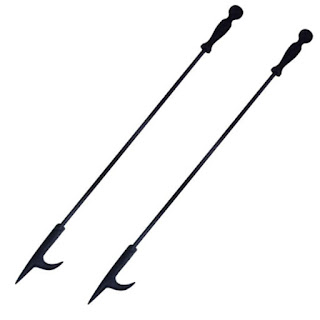 I didn’t have to put it into action because, surprisingly, he left in the night without bothering to come and find me. Or it was a pigeon. I still don’t know why the trapdoor was open, mind you. And a couple of weeks later, when I was all alone in the house again, and I paused The Sixth Sense to make a cup of tea, and had to go down to the old dairy to the fridge to get some milk, I didn’t look up. Would you? 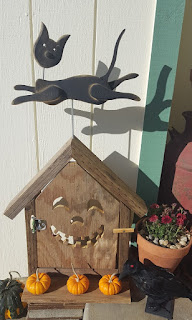 Halloween is sunnier at the new house. 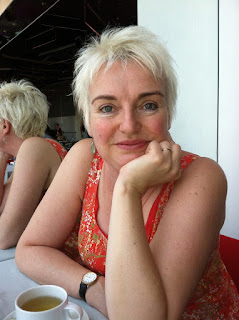 Catriona McPherson is the national best-selling and multi-award-winning author of the Dandy Gilver series of preposterous detective stories, set in her native Scotland in the 1930s. She also writes darker contemporary suspense novels, of which STRANGERS AT THE GATE is the latest. Also, eight years after immigrating to the US and settling in California, Catriona began the Last Ditch series, written about a completely fictional Scottish woman who moves to a completely fictional west-coast college town.

Catriona is a member of MWA, CWA and SoA, and a proud lifetime member and former national president of Sisters in Crime, committed to advancing equity and inclusion for women, writers of colour, LGBTQ+ writers and writers with disability in the mystery community.