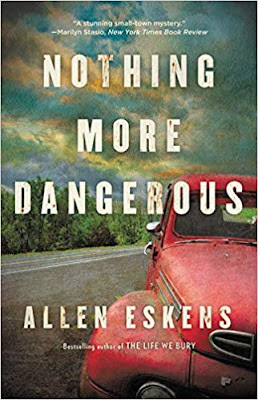 Sometimes a book comes along that gets it so right and says it so well you know you have to share that book with anyone and everyone.  Nothing More Dangerous by Allen Eskens is such a book.  That it took Eskens over twenty years from the time he first started this story to the time he was ready to give it to the world speaks of the desire to tell the whole truth and nothing but the truth in the best possible way.  There is one of my favorite authors who only wrote and published one book in her lifetime, and that book also addressed racism and blind hate and coming of age amongst it.  Nothing More Dangerous is in that league of important books about this subject, and I have placed it next to my copy of To Kill a Mockingbird on my bookshelf where that revered book sits.  Set in 1976, Nothing More Dangerous is also a timeless story that should also become a staple in classrooms and homes across the country.  It's a reminder that the fight against racism is a never-ending one that requires our constant vigilance.  Forty-three years since the time setting of the book and its relevance is as immediate as ever.

Boady Sanden has lived his whole fifteen years on Frog Hollow Road in Jessup, Missouri in the Ozark Mountain area.  He barely remembers the father who died when he was five-years-old, but his mother has been in a state of sorrow since his dad's passing, which serves as a constant reminder that his father is gone.  Luckily, their neighbor, Hoke Gardner  has been around to teach Boady fishing and other skills a father might have done, and Hoke has been a source of listening and dispensing wisdom, as Boady's mother seems so isolated in her grief.  With no friends and a few bullies at his high school, it's Frog Hollow Road that gives Boady a life where he can be himself and enjoy his surroundings.  However, it's a restless satisfaction with where he lives, as Boady is saving up money from his job at the sheetrock business, down the road from where he lives and where his mother is office manager, to leave it all behind for the big city.  He just needs to turn sixteen and be able to afford an old vehicle he can drive to get away.  He has it planned out and won't be deterred, until he is.


The big old Victorian house across the road from Boady's small house had been empty for several years, but a sudden sprucing up of its interior foretells new neighbors.  Those neighbors are Charles and Emma Elgin and their son Thomas, and their arrival changes everything in Boady's life.  The Elgins are a black family, and not everyone is as welcoming as the residents of Frog Hollow Road.  Charles Elgin is there to take over management of Ryke Plastics, the main employer in the county, due to an embezzlement of funds and a missing female employee suspected of absconding with the money.  The man Charles Elgin is replacing is Cecil Halcomb, and Cecil and his cousins belong to the CORPS, Crusaders of Racial Purity and Strength, so the replacement by a black man is an offense to Halcomb that is not taken lightly.  The Civil Rights Act of 1964 was passed to end racial discrimination and hate, but twelve years later in Jessup, Missouri in 1976, Hoke Gardner tells Boady a hard truth, that "you'll never change what a person thinks in their head or what they feel in their heart by passing a law."  Frog Hollow Road, in the summer of 1976 becomes a microcosm of the best and the worst of humanity, as friendship between Boady and Thomas grows into their families being close, and the CORPS-minded people of Jessup make their hate known.  Boady must decide if he should or can take a stand against those whose minds and hearts are poisoned by hate.

Although this narrative is clearly a coming-of-age story for a white teenager named Boady Sanden, and we closely follow the changes in him through the first person POV, it is a story of change and coming to terms with one's identity for several of the other characters in the book, too.  Layers.  It's the layers that make the story even richer.  Boady's mother Emma; Emma's employer, Wally Schenicker;  Hoke Gardner; and Thomas Elgin all have a summer that will forever affect their lives.  And, there's the mystery of Lida Poe's disappearance and how it ties into the events of that fateful summer.  The title of the book, Nothing More Dangerous, is part of a Martin Luther King quote and states the essence of the book perfectly.  "Nothing in the world is more dangerous than sincere ignorance and conscientious stupidity.”  Boady Sanden and his friend Thomas Elgin come face to face with that danger, and the world as Boady knew it is forever changed.

Nothing More Dangerous is a giant of a book in only 291 pages.  It will stay with you, not only in thinking about your best reads, but in thinking about how you should live.  Books of this magnitude should be read, shared, and discussed across the classrooms of America, in the book clubs of every sort, and at the table of family dinners.  Words matter, and Allen Eskens' words in this book can serve to caution us and to guide us, to spur us on to be better people and make a better world.