Above the Bay of Angels by Rhys Bowen: Reading Room Review 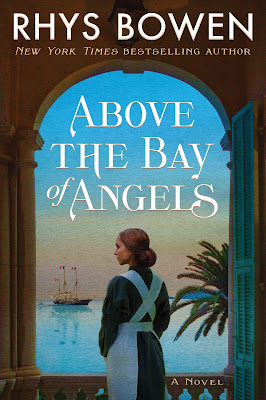 I’m a steadfast fan of all Rhys Bowen’s books. Her Royal Spyness series featuring Lady Georgie never disappoints and keeps me laughing at its wit and clever characters. Rhys also writes amazing stand-alone historical mystery books, four so far, that have become favorites and equally successful as her series books, being nominated for and winning multiple awards. She brings a fresh look at historical details that send this reader down rabbit holes of fascinating learning. Oh, that all history could be learned like this.

Rhys Bowen really did have me at hello in her new stand-alone, Above the Bay of Angels. That first riveting sentence that reads, “If Helen Barton hadn’t stepped in front of an omnibus, I might still be sweeping floors and lighting fires at an ostentatious house in St. John‘s Wood” told me how special this book was going to be. From the bizarre food dishes that Queen Victoria wanted her cooks to fix to the entourage she required to accompany her to the French Riviera, all these historical details give such a distinct flavor to the story. Described to readers as seen through the eyes of cook Helen Barton, aka Isabella Waverly, the events and people come alive through her enthusiastic reaction to them. 1896 is a fascinating period of history everywhere, as new inventions and new thinking was on a steady rise. Queen Victoria, who you might think would be set in her ways in the twilight of her reign, is the impetus for this story with her forward thinking of bringing women into her previously male-run kitchen. This historical setting combined with the suspense of Isabella assuming Helen’s identity and the fear of her getting caught is thrilling. Add a murder to the mix and Helen fighting to clear her name, and you have a page turner.

Isabella Waverly has had a disappointing life, although its beginning was rather idyllic. She reaped the benefits of her father being born into the aristocracy and a kind, loving mother. But, the British aristocracy was not a fair game, and Isabella’s father had the bad fortune to be born the son of a second son, thus no inheritance. After some success in India in the Bengal Lancers and a return to England with a good position at the Savoy Hotel, Mr. Waverly develops a drinking problem, gets fired, and Mrs. Waverly dies. Isabella must leave school, which she loves, and go to work at age fifteen as a servant girl to support her father and younger sister. She ends up in the kitchen in a house of a woman who is a nightmare to Isabella’s soul, but she is stuck as the woman refuses to give her a reference to go elsewhere, even though Isabella’s work is excellent. On a day off, Isabella’s luck turns, and she is handed a letter by a dying woman for an appointment to interview for the position of under-cook at the royal palace . The appointment is for Helen Barton of Yorkshire, the dying woman, and the references have already been given and checked. Isabella grabs her chance for a better life, goes to the palace for the interview pretending to be Helen, and gets the position.

The kitchen at the palace is a dream-come-true for Isabella, or Helen, as I will now refer to her. She has decided that becoming a Master Cook is her goal, and there's no better place to learn to do that than the royal kitchen. There’s just one other female cook in the large kitchen, and the male cooks aren’t exactly receptive, but through hard work and talent, Helen starts to earn their respect. After the pastry cook has an accident and must be off one day, Helen bakes scones for the Queen, who is delighted with them and then insists that Helen continue to work with the pastry cook. With the death of her father and her sister becoming engaged, Helen is finally out from under the burden of providing for anyone other than herself. The one dark moment comes when the real Helen’s brother shows up and threatens to spill the identity beans if he isn’t found a job with the royals, preferably with the Queen’s son, the Prince of Wales. In an encounter of great fortuity, Helen is able to ask the Prince of Wales to employ her “brother,” and Helen breathes a great sigh of relief, for the time being.

Helen is happy in her position and learning quickly, and she is not expecting the next great surprise. Queen Victoria has decided to leave the gloom and bad weather of a London February behind her and spend some time at the new hotel built for her in Nice, France, on the French Riviera. She always takes a large staff with her, as well as furniture and clothes and whatever else the Queen wants, such as the Highlander pipers, and Helen gets to be one of the cooking staff to go. She doesn’t even mind the boat trip and long, long train trip to get there. Helen never imagined that she would ever see such a place as Nice, and she is intrigued by everything, especially the cooking and baking of the French chefs, with whom the English chefs must share at kitchen at the great hotel. Helen is charmed by the warm, lively climate and its people, including the head French chef, a British transplant neighbor to the hotel, and the vendors of the food market. It’s all thrilling until a member of the royal party is found dead, and suspicion falls upon Helen, as she prepared his last meal. If she can’t clear her name, she stands to lose the job she loves and maybe more.

Above the Bay of Angels is a clear choice for my favorites list of 2020 reads, as well as a having a place on my favorites through the years. I am sure that it will be an award winner because this stand-alone is a standout.
Posted by Kathy Reel at 12:54 AM