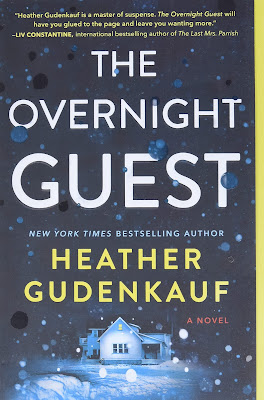 Wow! The Overnight Guest by Heather Gudenkauf is one of the most riveting reads I’ve encountered. The suspense just simply does not let up. The description “on the edge of your seat” is not one I use lightly, and it is the description that perfectly fits this book. The story is scary, not horror scary, but horrors are certainly visited upon the characters with a severity of trauma. Heather Gudenkauf presents this stunning story in three different narratives and two different times. Although the reader knows the narratives are connected, how those connections play out is gobsmackingly unpredictable. The twists have twists in this story. I am in awe of Gudenkauf’s talent in accomplishing this perfectly layered thriller. There’s so much with which to be impressed in her unfolding of the big picture.

Ordinarily, I’d agree that you can’t judge a book by its cover, but the house in the dark surrounded by falling snow and snow piled on the ground speaks volumes about the eerie atmosphere that entraps and suspends the world into its own time and place in this story. I must admit that it was this cover that drew me to read my first Heather Gudenkauf book, although I’ve had her in my sights for some time. The Overnight Guest just brings everything to the point of irresistible.

So, what is the story that enthralled me so, that obliterated my attention to all around me but its reading? I’ll first lay out an introduction to the three narratives, what drives them. I’ll finish up with some comments on just how remarkable this book is.

Josie Doyle is twelve years old in August 2020, and her best friend Becky has come to spend the night. She and Becky have pledged to be sisters forever, having the scars of their pledge in the soft flesh of their hands. Excitement is high in anticipation of going to the state fair the next day, and they expend some of the energy exploring around the farm and looking for Josie’s missing dog, visiting some of the neighbors to see if he’d been spotted. The girls also accompany Josie’s sixteen-year-old brother Ethan when he goes to shoot his gun with a friend. Ethan is supposed to be grounded, so when his father catches him out, they have words and Ethan refuses to hand over his gun.

After the girls are taken back to the house by Josie’s dad, they supposedly turn in for the evening. Even though they are leaving early the next morning for the fair, the girls are still full of enthusiasm and sneak out of the house at midnight to jump on the trampoline and look at the stars. It will be the last innocent moments of their lives. They hear popping noises, and looking up at the house, they see flashes of light in the upstairs window. Wanting to be with her parents, Josie starts leading Becky toward the house, but a man comes out and starts moving toward them. Josie knows that she and Becky need to run into the corn to escape. One of them makes it, one doesn’t. One is shot, one isn’t. The small farming community wakes up the next morning to two dead, one wounded, and two missing from the Doyle farm.

Wylie Lark writes true crime books, which involves some tough research of interviewing victims’ families and viewing crime scene photos. The book she is currently writing is about the tragedy of the Doyle family in the farming community of Burton, Iowa. To finish it Wylie has traveled to the scene of the crime, as close as someone can get to it. She’s temporarily living in the isolated farmhouse where the murders occurred twenty years ago. A major winter snowstorm has left her without electricity and dependent on the fireplace for warmth and her abundant supply of flashlights for light. This is, of course, the perfect setting for things that go bump in the night. Readers will not be disappointed there.

Wylie prepares herself for a long night of hunkering down in the storm, knowing she won’t be able to get out for a while. She had hoped to put the finishing touches on her book in her time of solitude, but that will have to wait. Upon letting her dog Tas out to take care of his business, she has to go outside in the front yard to retrieve him. Tas leads her to a small boy who is lying unconscious in the snow. The child is dressed only in indoor clothes, without a coat or other protection from the weather, and he has blood from a cut on his head. Wylie knows she must get him inside and warmed up, which she does, but she also knows he couldn’t have gotten to her yard by walking there. She goes back out into the storm and discovers an overturned truck off the road. With further exploration, she comes upon a woman tangled in a barbwire fence who is obviously from the overturned truck. Unable to free the woman from the barbwire, Wylie trudges back to the farmhouse for some wire cutters. When she returns, the woman is gone.

A little girl and her mother can only see the snowflakes from a small window in the basement where the girl’s father keeps them. She can only hope that her father doesn’t make an appearance through the basement door, as it rarely means anything good. Readers learn what cruelties are dealt mother and child through the girl’s reflections back on her dire existence. They are dependent on this man for everything, and he doesn’t hesitate to withhold basic necessities.

The child is most distressed when her mother is physically abused by their jailer. She can only comfort her mother afterwards by lying with her on their makeshift, but permanent, bed. The only solace the girl has from this dreadful life are books, not many, but she is grateful for what she has. Her mother tries to look out for her and gives her the larger portions of food, but the person who holds the literal key to her life isn’t interested in her happiness. There’s little hope left for a different existence.

The setting of the current day events in the book couldn’t be more perfectly metaphorical if it tried. An isolated farmhouse in a blizzard. The characters are stuck, and not just physically. Their mental chains are heavy with age. Will there be more tragedy or victory over the oppression, or both? Readers will develop a gripping desire to see hope become a reality for the characters who have suffered so. There will be more than one gasp from the reader as beginning and ending events consume the pages and the emotions.