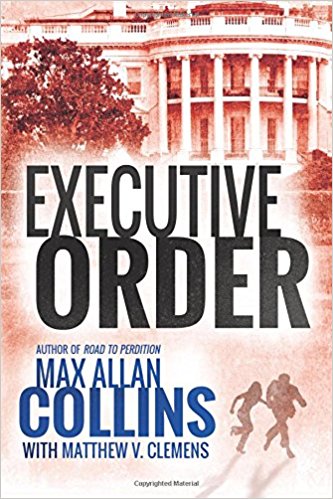 Ready! Set! Action!   One of the best measures of a book being a great read is that you simply cannot put it down.  Executive Order engages the reader on the first page and doesn’t let go until the last page.  Political thriller, murder mystery, crime story.  This third and final Reeder and Rogers book has it all, and Max Allan Collins and Matthew Clemens tell it so well that I knew I was in the presence of great storytellers.  Before reading this series, starting with Supreme Justice and followed by State of the Union and Executive Order, I would have argued that political stories were just not my cup of tea.  Of course, the Reeder and Rogers series taught me a thing or two about making such predictions ever again.

When four CIA operatives are killed in the Eastern European country of Azbekistan as the Russians invade that country, the President of the United States enlists the aid of Joe Reeder, an ex-Secret Service agent and currently the owner of an international security company.  The President had given orders that no agents were to be sent to that area and needs to find out who sent them and why.  Reeder has proven his usefulness and brilliant investigative skills in prior situations of national security.

Reeder’s preferred partner in working difficult national situations is Patti Rogers, the leader of the FBI Special Situations Task Force.  Rogers and her team have just begun to investigate the death of the Secretary of the Interior from an allergic reaction to a delivered lunch.  Reeder, with his radar for reading people and uncanny hunches starts to suspect that the two events aren’t as unrelated as they first appear.  Reeder and Rogers start pooling their information, and it’s not long before others start to die and the unthinkable becomes the reality.  A well-hidden conspiracy must be rooted out and brought to light, but Reeder and Rogers become targets themselves in a fight where winner takes all.

Collins and Clemens have given us a thriller with a storyline that is as timely as it is frightening.  Set in Washington, D.C. in the not too distant future, the world stage and the problems of the United States seem all too familiarly frightening, but with unseen enemies pulling strings that raises the level of concern to a frantic level.  The gripping aspect to this story is that it is plausible.    The characters, both major and minor play their parts well, and the dialogue is a witty success.  The authors started this trilogy with a bang, and they have ended it the same.  I’m sure to be one of many who wishes there were more Reeder and Rogers to come.