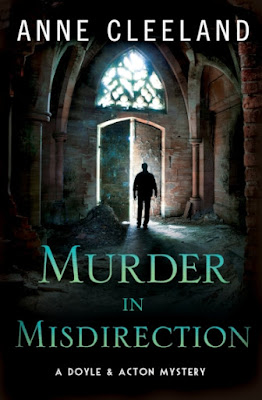 There are characters in a series in whom readers become so invested that reading a new book in their continuing story is like receiving a letter from home detailing the news of kith and kin.  You tear open the letter/book and dive in, reading to the end in a breathless aura of suspense, and there is always plenty of suspense in a Doyle and Acton story.  Murder in Misdirection, the seventh book in this series is a particularly satisfying one, as the storyline of Detective Sergeant Kathleen Doyle and her pregnancy has kept readers on pins and needles for several books now.

Kathleen is on maternity leave from Scotland Yard, and so Michael Sinclair, Lord Acton and DCI at the Yard, has some peace of mind that she is safe and out of the Met's business (and his) that usually puts her in harm's way.  As Acton says more than once, he's got to stop underestimating his wife.  Being close to giving birth doesn't sideline Doyle from trying to help solve problems, problems that usually end up tangled in the web of Acton's maneuverings.  A request from Father John, the priest at Doyle's church, to aid in his efforts to convince the bishop that a recently departed man be granted burial in sacred ground has Doyle looking into matters best left undisturbed.

And to further plunge Doyle into the fray of business which Acton wants her to stay clear is the appearance of a ghost in the form of a dead priest.  Ghosts are just a normal occurrence to Doyle, whose fey abilities are both a useful resource and a curse.  The dead priest is urging Doyle to take action where blood money and arson involve a relative of his.  It's clear that Acton is in the middle of this puzzle, but Doyle once again has to keep her investigations secret from her husband, as he is keeping his actions secret from her, to help prevent Acton from damning his soul any more than he already has.  Of course, Acton's view of the matter is centered around making Doyle's life and the life of their unborn child safe in perpetuity.  Although the story is told from Doyle’s POV, we are allowed glimpses into Acton’s unspoken thoughts through the author’s use of beginning each chapter with one of his observations.

There are some fascinating subplots going on in this book, too.  Philippe Savoie, dangerous criminal and friend of the fair Doyle’s, is sitting in prison awaiting either a trial or a prison escape.  And, of course, Savoie is involved with Acton’s plans to tidy matters up from the corruption ring at the Met that Acton uncovered in the last book.  Savoie’s adopted son Emile is staying with Doyle and Acton while the criminal is incarcerated, as is the young girl Gemma, the ward of Mary, who is the intended nanny for Doyle’s and Acton’s soon-to-be-arriving Edward.  Emile and Gemma have secrets about themselves that will be uncovered, too, secrets that will gobsmack the adults in charge. Reynolds, Lord and Lady Acton’s butler and jack-of-all-trades, shows a new skill as he deftly handles the young children underfoot.  Lizzie Mathis, Acton’s no-nonsense partner in shady doings is back and doing Acton’s bidding.  Detective Inspector Thomas Williams is doing some bidding, too, but for Doyle.  And Detective Sergeant Isabel Munoz is on hand to spar with Doyle, always some favorite pieces of dialogue.

At this point in reading Anne Cleeland’s writing, the Acton and Doyle series and her adventure books, too, I have probably sung Anne’s praises with untold number of superlatives.  However, I don’t think I can ever thank her enough for creating the Doyle and Acton series that gives me such a thrill in each book.  Fans of this series, and there are many, aren’t just fond readers.  We have rather the same diagnosis as Acton in his uncontrollable passion for Doyle, happily addicted.


Murder in Shadow: Reading Room Review
Posted by Kathy Reel at 12:53 AM