The Case of the Unsuitable Suitor by Cathy Ace: Reading Room Review 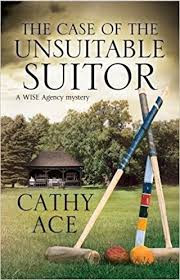 Author Cathy Ace is single-handedly responsible for me falling in love with Wales. The WISE Enquiries Agency series and Cathy's postings about her native Wales on FaceBook have put this charmingly quirky place on my must-visit list. Four women, plus an increasingly helpful Dowager Duchess, all bring different skills from different backgrounds to the small agency that usually surpasses the abilities of the local constabulary in the Welsh village of Anwen-by-Wye. Mavis, who is the call-to-order leader of the group, often has to keep things smoothed over with the police, and assure them the WISE Women aren't exceeding their authority. Of course, they are.

In this fourth book in the series, Chellingworth, home to Henry, Duke of Twyst and his wife Stephanie, now Duchess, is the site of the upcoming annual croquet tournament. There are a myriad of problems with which the anxious Henry must deal, and the WISE women, who have their business on the grounds of the estate, become involved, with Althea, the Dowager Duchess, urging them on. Moles have burrowed their way onto the grounds, and although that's not a problem the WISE agency can fix, there is another pest, or so thinks the local pub manager Tudor Evans, that seems to be of considerable concern. Huw Hughes is a local who has lived away from the village for many years and has returned to retire there, after a successful business career and three dead wives. Tudor's main worry is that Huw seems to be courting Annie, and the history of the three dead wives doesn't sit well. Of course, Tudor's interest in Annie is personal, as most everyone but Annie knows. Tudor asks Annie's fellow enquirers to check up on the charming new guy in town, and Carol's expert research reveals some questionable facts about Huw. When vandalism is found on one of the estate's out buildings, with an ominous message, and there's an occurrence of meddling at the croquet practice reception, The WISE Agency begins a more thorough investigation of all people attending, including Huw. Before any firm answers are discovered, a murder occurs, and there's no time to lose to prevent another.

There is another story going on while the WISE Agency searches for a devious murderer. Christine, another member of the agency, is on vacation with her boyfriend at her family's Irish estate, but it turns out to be anything but relaxing. She discovers something illegal going on at her family home, which leads to a slippery man called Gadfly and a ring of dangerous activity. This story interested me, as it shows Christine being a force with which to be reckoned and not just a pretty face with great contacts.

And, as with each book in this series, threaded among the murder and thugs and racing against the next disaster is the witty dialogue and humor that makes reading these books so much fun. Of course, the amusing titles are a dead (pardon my pun) giveaway to the fun within, and the covers are some of my favorites.