Merry Month of May: New Books

May has shaped up to be a sweet month of reading indeed.  Of course, I mean sweet in the sense of lots of great murder, mayhem, and crime.  As I'm still typing with my broken hand and cast, I will suffice it to say that I think more than a few of these titles will be a welcome addition to spring reading. There are some authors I will be reading for the first time, as it's so hard to get to all of the amazing writers and stories.  And, there will be some old friends, such as Elly Griffiths (the 10th anniversary book of the Ruth Galloway series) and Matthew Pearl (a follow-up to his popular Dante Club).  I have already reviewed Elly's The Dark Angel here on the blog and will be posting it again before the book's release date, and, of course, the book is outstanding. Two authors are on their second book in their series, Kristen Lepionka and Susan Shea, and I loved both of the first books last year.  First up is a list of books and then a few descriptions to whet the appetite.


Dressed for Death in Burgundy: A French Village Mystery by Susan C. Shea (May 1st)


What You Want to See: A Roxane Weary Novel by Kristen Lepionka (May 1st)


Warlight: A Novel by Michael Ondaatje (May 8th)


The Retreat by Mark Edwards (May 10th)


The Death of Mrs. Westaway by Ruth Ware (May 29th)

The Dante Chamber by Matthew Pearl (May 29th) 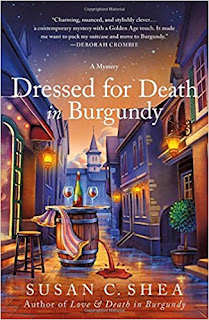 After finding herself mixed up in a murder investigation the previous Summer, Katherine Goff’s life simply has not been the same. Her husband has been in the US recording a new album, the Burgundy region locals are finally starting to see her as a real neighbor, and Katherine has even started helping out with “tourist” excursions. It seems she’s finally found her place in the small community of Reigny-sur-Canne.

But when Katherine stumbles across a body in the local museum during a tour, she finds herself caught up once again in a whirlwind of gossip and speculation. When the police zero in on her friend Pippa as a suspect, Pippa and Katherine team up to find the real killer and clear her name.

However, the more clues they discover, the more the real killer wants them off the trail. When Katherine and Pippa start receiving threats, they must decide what they are more afraid of—the police getting it wrong, or possibly becoming the killer’s next targets. 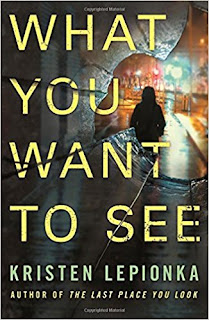 Marin Strasser has a secret. Her fiancé thinks her secret is that she’s having an affair, and he hires P.I. Roxane Weary to prove it. Then, just days into the case, Marin is shot to death on a side street in an apparent mugging. But soon enough the police begin to focus on Roxane's client for Marin’s death, so she starts to dig deeper into Marin’s life―discovering that the elegant woman she’s been following has a past and a half, including two previous marriages, an adult son fresh out of prison, and a criminal record of her own. The trail leads to a crew of con artists, an ugly real estate scam that defrauds unsuspecting elderly homeowners out of their property, and the suspicious accident of a wealthy older woman who lives just down the street from where Marin was killed.

With Roxane’s client facing a murder indictment, the scammers hit close to home to force Roxane to drop the case, and it becomes clear that the stakes are as high as the secrets run deep. 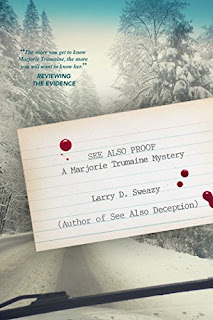 Dickinson, North Dakota, 1965. It's a harsh winter, and freelance indexer Marjorie Trumaine struggles to complete a lengthy index while mourning the recent loss of her husband, Hank. The bleakness of the weather seems to compound her grief, and then she gets more bad news: a neighbor's fourteen-year-old disabled daughter, Tina Rinkerman, has disappeared. Marjorie joins Sheriff Guy Reinhardt in the search for the missing girl, and their investigation quickly leads to the shocking discovery of a murdered man near the Rinkermans' house. What had he been doing there? Who would have wanted him dead? And, above all, is his murder connected to Tina's disappearance?

Their pursuit of answers will take Marjorie all the way to the Grafton State School, some six hours away, where Tina lived until recently. And the information she uncovers there raises still more questions. Will the murderer come after Marjorie now that she knows a long-hidden secret? 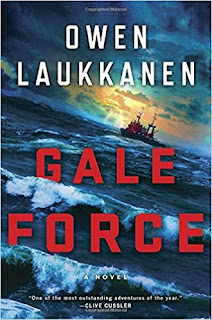 In the high-stakes world of deep-sea salvage, an ocean disaster can mean a huge payoff--if you can survive the chase.

McKenna Rhodes has never been able to get the sight of her father's death out of her mind. A freak maritime accident has made her the captain of the salvage boat Gale Force, but it's also made her cautious, sticking closer to the Alaska coastline. She and her crew are just scraping by, when the freighter Pacific Lion, out of Yokohama, founders two hundred miles out in a storm.

This job is their last chance--but there is even more at stake than they know. Unlisted on any manifest, the Lion's crew includes a man on the run carrying fifty million dollars in stolen Yakuza bearer bonds. The Japanese gangsters want the money. The thief's associates want the money. Another salvage ship, far bigger and more powerful than Gale Force, is racing to the rendezvous as well. And the storm rages on. If McKenna can't find a way to prevail, everything she loves--the ship, her way of life, maybe even her life itself--will be lost. 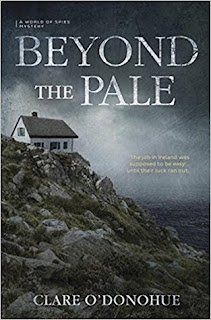 It's an easy, twenty-minute job. At least, that's the pitch from Interpol to professors Hollis and Finn Larsson. Going undercover to procure a priceless rare book manuscript means an all-expenses paid trip abroad. A little danger thrown into the mix may even spice up their marriage.

Soon after landing in the Emerald Isle, they realize the job is anything but easy. Their contact is a no-show and they're left with fifty thousand euros, a death threat, and some serious questions. Ducking and dodging their way across Ireland, Hollis and Finn must hunt down the priceless manuscript and a missing agent while trying to stay one step ahead of a dangerous and unknown enemy. 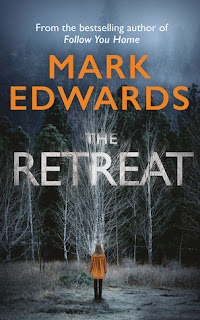 Two years ago, Julia lost her family in a tragic accident. Her husband drowned trying to save their daughter, Lily, in the river near their rural home. But the little girl’s body was never found—and Julia believes Lily is somehow still alive.

Alone and broke, Julia opens her house as a writers’ retreat. One of the first guests is Lucas, a horror novelist, who becomes obsessed with finding out what happened to Lily. But within days of his arrival, the peace of the retreat is shattered by a series of eerie events.

When Lucas’s investigation leads him and Julia into the woods, they discover a dark secret—a secret that someone will do anything to protect…

What really happened that day by the river? Why was Lily never found? And who, or what, is haunting the retreat? 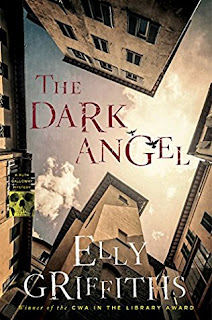 It’s not every day that you’re summoned to the Italian countryside on business, so when archaeologist Angelo Morelli asks for Ruth Galloway’s help identifying bones found in the tiny hilltop town of Fontana Liri, she jumps at the chance to go, bringing her daughter along with her for a working vacation. Upon arriving, she begins to hear murmurs of Fontana Liri’s strong resistance movement during World War II and senses the townspeople are dancing around a deeply buried secret. But how could that be connected to the ancient remains she’s been studying?

Ruth is just beginning to get her footing in the dig when she’s thrown off-guard by the appearance of DCI Nelson. And when Ruth’s findings lead them to a modern-day murder, their holidays are both turned upside down, and they race to find out what darkness is lurking in this seemingly picturesque town. 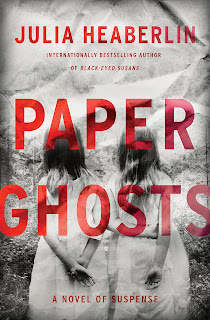 An obsessive young woman has been waiting half her life—since she was twelve years old—for this moment. She has planned. Researched. Trained. Imagined every scenario. Now she is almost certain the man who kidnapped and murdered her sister sits in the passenger seat beside her.

Determined to find the truth, she lures him out of a halfway house and proposes a dangerous idea: a ten-day road trip, just the two of them, to examine cold cases linked to his haunting photographs.

Is he a liar or a broken old man? Is he a pathological con artist? Or is she? In Paper Ghosts, Julia Heaberlin once again swerves the serial killer genre in a new direction. You won’t see the final, terrifying twist spinning your way until the very last mile. 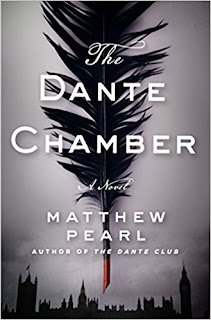 The year is 1870. Five years after a series of Dante-inspired killings disrupted Boston, a man is found murdered in the public gardens of London with an enormous stone around his neck etched with a verse from the Divine Comedy. When more mysterious murders erupt across the city, all in the style of the punishments Dante memorialized in Purgatory, poet Christina Rossetti fears her brother, the Dante-obsessed artist and writer Gabriel Rossetti, will be the next victim.

Christina enlists poets Robert Browning and Alfred Tennyson, and famous scholar Dr. Oliver Wendell Holmes, to assist in deciphering the literary clues. Together these unlikely investigators rush to unravel the secrets of Dante's verses in order to find Gabriel and stop the killings. Racing between the shimmering mansions of the elite and the dark corners of London's underworld, they descend further and further into the mystery. But when the true inspiration behind the gruesome murders is finally revealed, Christina realizes that the perpetrator has even bigger and more horrific plans than she had initially thought.