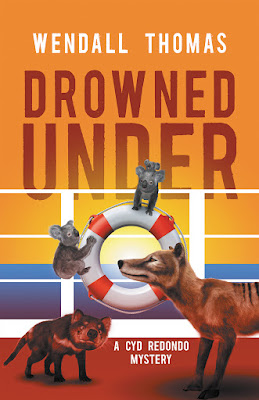 It's almost Christmas in the borough of Bay Ridge, Brooklyn, and Cyd Redondo is not feeling the warm and cozy of the season. Her Uncle Ray's incarceration is a result of Cyd's last adventure in which she uncovered a thriving, illegal exotic animal business operating within her close community. The community and Cyd's extensive expanded family are not happy with her, and there is a freeze-out blowing her way in the holiday cheer. When Cyd's ex-husband Barry Manzoni asks her for help in locating his missing parents who took a cruise to Australia, Cyd is only too happy to absent herself from a Brooklyn Christmas disaster. After phoning her friend and Australian cruise contact Harriet Archer, Cyd is set up to join the current cruise of the Tasmanian Dream and share a cabin with Harriet.
With a tight window of meeting Harriet and the cruise ship in Melbourne, Cyd arrives too late. But, the good and bad news is that Harriet had a plan B, a helicopter waiting to fly Cyd to the Tasmanian Dream. That's the good news. The bad news is that there is no place for the helicopter to land on the ship's deck, so Cyd must be lowered via a rope ladder to her destination. Balancing a carry-on bag and her beloved Balenciaga bag, Cyd makes it mostly down the ladder with a last minute detour into the arms of a lifeguard with a "significant torso" and a final landing with him on a lounge chair. Making her apologies, she is met by the cruise director and taken to her cabin. A grim sight greets Cyd in her cabin, as her friend Harriet is lying dead on the floor, with blood pooling around her head. The ship's doctor is called for, and the man who caught a falling Cyd on deck is now changed from Speedo to a tux. He and others call Harriet 's death an accident, but Cyd and her unerring tuition, plus some clues, convince her that her friend has been murdered.
Cyd is distraught that Harriet is dead, and Cyd's especially worried that Harriet might have been targeted because of asking about the missing Mazonis. Now, the trip to find Barry's parents also becomes a race against the clock to find Harriet's murderer. Of course, two impossible tasks aren't enough, and before long, a complication named Howard, whose very species will depend on Cyd's help, is thrown into the mix and her Balenciaga.
There is so much to love about Drowned Under, as Wendall Thomas is an extraordinary storyteller and writer. The characters are all fascinating, both the good eggs and the bad ones. Cyd's tasks may seem to be impossible, but the characters who become her partners in crime solving work with her in one crazy scenario after another to accomplish that impossible. From eighty-one-year-old Sister Ellery Magdalene Malcomb, former nun and Cyd's former teacher, to Koozer, the young steward who is fond of large tips, to the doctor, who makes Cyd's stomach feel bubbly in a god way. All these characters and more make the journey of the Tasmanian Dream a great adventure. The pace of the story is always moving at just the right speed to create suspense and danger and release to more suspense and danger, ending in typical Cyd Redondo style, a few messy loose ends, such as Cyd's heart.
I received a copy of this book from the author, and I have given an honest review of Drowned Under, a smashing good read that shouldn't be missed.