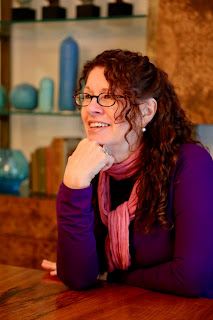 I am so excited to have Wendall Thomas on The Reading Room Blog today for an interview.  She has Cyd Redondo #2, Drowned Under, out tomorrow, March 19th.  My review is already up her on my blog, and as with the first book in this wonderful series, I loved every page of it.  In today's interview with Wendall, readers will discover that Wendall is every bit as interesting as her character Cyd.  At the end of the interview, I'm including links to Wendall's website and other connections to her, which I'm sure you'll want to explore.

Note: My questions will be prefaced by KBR for Kathy Boone Reel, and Wendall’s answers will begin with WT for Wendall Thomas.

KBR:  Wendall, I’m always amazed by the “day jobs” so many authors have, how many different hats they wear besides author.  I must say that you take “day job” to a whole new level.  Readers only have to visit your author website and view the bio information to see just how multi-talenteid and constantly busy you are, but what I’d like for you to do is tell readers what a typical year is like for you these days, if there is a typical year.  What are your regular gigs, and has that changed since adding novelist to the list? Does sleep even figure into your schedule?


WT:  Any freelancer juggles a million things—it’s the nature of the beast.  Since I never know if I’m going to get another job, or if I’m going to get paid on time for the one I’m doing, I rarely turn down work, even if I don’t have time to do it. In a regular year, I teach at least one class in the Graduate Film School at UCLA, run some kind of screenwriting mentorship program in the UK or Australia, prep and deliver 24 hours worth of lectures for the Melbourne International Film Festival, create and host “The Living Room Lectures” in my house, and do personal script consulting. In 2018, while I was trying to write Drowned Under, I also had a script optioned (which involved major rewrites for the producers) and had to create and film a term’s worth of video lectures on screenwriting for UCLA’s online program, so it was probably my most stressful year ever. I’ve pretty much been getting up at 4 a.m. for the last 18 months, just so I can work enough to afford to write novels and stories. I do make sure to set aside time to write every day, no matter what.

KBR:  The next logical question I suppose would be, with already having a full career with screenwriting, consulting, teaching, speaking, and lecturing, how did you get into writing novels?  Was there a lightbulb moment when you thought, aha I want to write a novel, or did that seed get planted when you were little Wendall conquering grade school with your pen and paper?

WT:  I’ve always been an obsessive reader - my third-grade teacher was concerned I was reading too much and called my parents in, but my father told her to go to hell – so I always wanted to write novels, but for years I believed if I couldn’t be as good as Jane Austen or Flannery O’Connor or Henry James, I shouldn’t even try. I started out writing songs, then scripts. Lost Luggage was originally a script which didn’t sell. I was reading a ridiculous amount of mystery novels at the time and, not wanting to give up on Cyd, I wondered whether she might be right for a series. So I took a deep breath and tried NaNoWriMo. I think the sheer speed that it requires finally allowed me to get out of my own way.


KBR:  I know that dialogue is supposed to drive the story forward and deepen characterization, and the dialogue in this series absolutely does all that, but it’s also some of the most entertaining, witty dialogue I’ve read.  Do you think being a script writer, dialogue is easier for you to write, or is it harder in the context of a novel?  And, what do you think is the biggest difference or adjustment you’ve had to make from script writing to novel writing?


WT:  Dialogue has always been my favorite part of writing scripts and I absolutely believe that the kind of pacing and rhythm you try to create in a film script can help you in novel writing. The hardest things for me in the transition to novel writing were, first, being inside my characters’ heads, (forbidden in screenwriting, you have to externalize everything) and, second, trying to create the same “zany” film rhythm in the physical comedy, since it is a million times harder to do it in prose. With a script you can use the “white spaces” for timing and to set up physical jokes, which you really can’t in a novel. The big set pieces, like the shoot-out at the smuggling compound in Lost Luggage, or the helicopter descent in Drowned Under, Both took an unbelievable number of drafts to get right.


KBR:  Of course, your fans will want to know where you came up with the character of Cyd Redondo.  Is she a complete figment of your imagination, or is there someone whom you met that inspired her creation? And, did you think of the character Cyd first or the story line of the mishap travels?


WT:  I was doing a screenwriting lecture - in Scotland of all places - and she just showed up in my brain. I saw a small woman in a mini skirt, heels, and about fifty flea market bracelets standing in a jungle clearing. A guy came toward her and she whacked him with the bracelets and knocked him out. I liked her.


KBR:  Setting is always an element that I take an interest in.  It can be an important part of what makes a character who she/he is.  Being that you grew up in and went to school in North Carolina, and you now live in Los Angeles, what brought you to the setting of Brooklyn for Cyd’s home and business?

WT:  When Cyd showed up, she just seemed like a Jersey or Brooklyn girl. I had a couple of close friends in college who were from Jersey and had multiple older brothers, and so that just seemed right for her. Once I figured out I wanted her to be a travel agent who specialized in senior citizens, I looked up “Naturally Occurring Retirement Communities” and found Bay Ridge. I flew there, befriended the hotel receptionist, and she introduced me to half the town. That was pretty much it. It’s a great, singular place and, of course, the setting for Saturday Night Fever and Peggy Olsen’s home borough in Mad Men.

KBR:  Continuing with setting, Tanzania in Africa was a fascinating location for Cyd’s first adventure in Lost Luggage, and it looks like we’ll be following her to Tasmania in Australia in Drowned Under, book #2.   I must ask, did you intentionally pick locations with names that closely related spelling-wise?  Is Cyd working her way through the T/ania names?  Hahaha!  And, are these places you’ve traveled to yourself?

WT:  Haha. The two “T” names were an accident, but come to think of it, she might have fun in Tonga... I have been to Tasmania, twice, and I’m obsessed with it. For Tanzania, I couldn’t afford a proper safari, but I had several friends who had been there, so I really depended on them as well as multiple travel writers and bloggers. It took a significant amount of reading, YouTube watching, spreading out maps on the floor, going to the San Diego Zoo, etc. to pull it off.

KBR:  Were you always interested in mystery/crime books?  Did you go the usual route of reading Trixie Belden or Nancy Drew growing up?  Agatha Christie?  As an adult, is that genre a favorite to read?  Has your reading of mystery/crime increased since you’ve become a part of that community yourself as a writer?  (I know once I started doing reviews of mystery/crime for my Reading Room blog and attending Bouchercon, my TBR list exploded.)  Are there any authors, any genre or non-fiction, that you’ve been a long-time fan of?

WT:  I jumped from Harriet the Spy and Encyclopedia Brown to Agatha Christie. I was babysitting for my cousins and they had all her novels, so I worked through them the summer I was thirteen, moved to Ngaio Marsh, then fell in love with Chandler and Hammett in college. Since then, I have to admit I love everything from noir to zany in crime fiction. And of course, I idolize Sarah Paretsky and Sue Grafton. Yes, my mystery reading has increased exponentially since I started writing mysteries, mainly because the mystery community has the loveliest people ever and when I meet someone new, I instantly want to read all their books.


KBR:  Then, I must satisfy a curiosity of many readers about their favorite authors by asking you what books are on your nightstand waiting?

WT:  I’m doing some research for a period novel at the moment, so in addition to The Best American Noir of the Century, The Zig Zag Girl by Elly Griffiths, All the Way Down by Eric Beetner, and Two Prospectors: The Letters of Sam Shepard, I’m set to reread Henry James’s The Better Sort, Wilkie Collins’s No Name and The Moonstone and John Fowles’s The French Lieutenant’s Woman.

KBR:  Although reading is my first love, I’m pleased with so many amazing mystery/crime/detective/amateur-sleuth series on television, from the regular channels to Netflix to Acorn to Amazon Prime to Hulu to Brit Box and more.  Do you have a favorite show or justice-seeker in these ever-growing number of programs?

In terms of filmed series, my absolute favorite at the moment is Patriot on Amazon Prime and after that, probably Shetland, Happy Valley, and Justified.


KBR:  And now, to close out our time together, here is one of my favorite questions I ask authors.  What would you like your readers to know about you that isn’t in your bio information?  Besides your obvious writing talent, any special interests or talents, quirky or not, you’d like to share?

WT:  I was a musician in my youth and put myself through college playing in various sleazy and semi-sleazy bars across America. Probably the worst one was in Marathon Key, where I was the featured “intermission entertainment” between the crab races. My music obsession finally paid off when I got to write Bonnie Raitt’s induction speech for the Rock and Roll Hall of Fame, so that’s probably the thing I’m proudest of. I also taught high school – I was the first single female teacher and dorm supervisor in the English Department at the all-male Deerfield Academy in Massachusetts in the early 1980s, which is why I don’t have children.