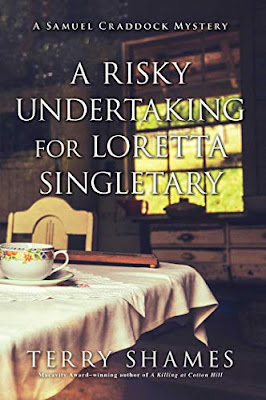 When I first saw Loretta's name in the title of the new Samuel Craddock series, I was absolutely delighted. Loretta Singletary is one of those supporting characters in a series who makes a return to it a must. Of course, I dearly love Samuel Craddock, the main character, and he is one of the fictitious characters I'd most like to meet, but he does need a stellar supporting cast who make Jarrett Creek a destination of return time and time again. Fortunately for readers, author Terry Shames is a master at creating intriguing characters who are never stagnant but are always evolving, with their Texas charm masking a strength and determination of achieving their goals, be they good or bad. Even Samuel's new puppy, Dusty, adds to our enjoyment of and telling of the story.

It seems that Chief of Police Samuel Craddock isn't the only one in Jarret Creek with romance on his mind. His new relationship with Wendy, whom he met at a Thanksgiving dinner his then girlfriend Ellen couldn't attend, is giving Samuel new pause for wonder at how being in sync with another human being can be so thrilling again. When long-time friend Loretta Singletary stops by Samuel's house to speak to him about the annual goat rodeo in town, Samuel is surprised she's not bringing baked goods like she usually does, and she's dressed up as if going somewhere special. She even has a new haircut and is wearing make-up. But, Samuel has no idea what has sparked Loretta's new interest in her appearance until she turns up missing. Then he learns that his old friend, whom he had taken for granted as a pillar of the community and predictable down to the delicious cinnamon rolls she bakes has joined the 21st century by signing up for a senior citizens' online dating service.

While allowing for the fact that Loretta was spreading her wings into new territory outside of Jarrett and her beloved Baptist Church, Samuel knows that Loretta would not have just taken off without informing someone. No matter what newly enlightened attitude Loretta was adopting, she was still a highly responsible person and a thoughtful mother, friend, and community member. When another older woman using the same dating site as Loretta turns up missing and then dead, Samuel and his new, efficient deputy Maria Trevino start investigating on a urgent schedule of combing through Loretta's dating profile and interviewing anyone who might have any useful information. The investigation is a great police procedural to follow. The Chief of Police at Bobtail, the other town where the missing woman was from, is most cooperative with Samuel, as they work towards finding the person they think is responsible for both disappearances and the one death. Samuel is desperate to find Loretta and not have her name added to the dead. There are lots of interesting items that come up during the investigation of the dating site, some of concern about a Jarrett Creek member of the site, but there is nothing more surprising than the ending of this tale. Shames has given readers a magnificently mastered twisted treat of a finale.
While dealing with the issue of online dating, this story delves into an area of it too often neglected, that of senior citizens using this avenue to meet people and prospective partners. Senior citizens are especially vulnerable, with people preying on them for their money and family maybe being miles away. But, this isn't the tale of frailty or tragedy. It's actually a wonderful look at Loretta becoming more than just a taken-for-granted, reliable person. It's a wake-up call for her friends, especially Samuel, who consider her a close friend and yet haven't the first clue about how Loretta feels as an individual woman and just how generous her baking for everyone is. The book gives a new depth to many of the characters, just when you think you couldn't love them any more. For me, A Risky Undertaking for Loretta Singletary is a landmark story in the Samuel Craddock series, from which there are so many more stories waiting to be told. Of course, Terry Shames all along has led us deeper and deeper into the community of Jarrett Creek, making it impossible for readers to ever get enough of its residents and their stories.