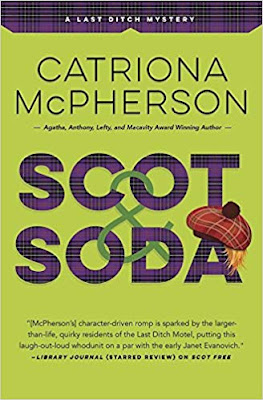 We were first introduced to Scottish therapist Lexy Campbell in Scot Free, and she was such a wonderful reflection of author Catriona McPherson's personal wit and humor that you knew it was the beginning of a fabulous new series. Like the author, character Lexy Campbell is a Scottish transplant to northern California, but unlike the author, Lexy's introduction to the states has been a series of mishaps and murder. Lexy has landed in the fictitious town of Cuento, California at the Last Ditch Motel and is currently living on a houseboat anchored in the slough next to the motel. While this situation sounds less than desirable and certainly has its share of problems, Lexy has formed close friendships with the long-term residents of the motel, which also boasts the Skweeky Kleen Launderette. It's a crew of diverse backgrounds and talents, and in Scot & Soda the bug-a-phobic, fashion enthusiast doctor and germophobic owner of the Skweeky Kleen have some interesting ideas about how they can combine their talents with Lexy's therapy business. Quirky rules the day at the Last Ditch Motel. But, I've gotten ahead of the story.

Lexy is trying hard to make her Halloween party on her houseboat an American celebration, in spite of her unfamiliarity with many of the non-Scottish traditions. There are some glitches, but Lexy and her friends from the Last Ditch are enjoying the infected toenail chips, the phlegm cups, and the hen's feet treats and the festive atmosphere of the creepy holiday. But, there's creepy cool and creepy bad, and when Lexy tries to pull up the beer chilling in the slough off her boat, the creepy gets way too bad and way too real. Tangled up in the rope and beer is a dead body, a real body, not some Halloween prank, and the man is dressed in Scottish attire, a kilt and a tam o'shanter (red wig and tam) stapled to his head. The coincidence of a dead body in Scottish attire showing up attached to the boat of the only Scottish person in the vicinity seems way too close for comfort. That a ring Lexy saw around one of the fingers of the dead man disappears before the body can be examined sets Lexy's curiosity radar ablaze. It's not surprising that the Last Ditch "family" of friends becomes involved in discovering who this party crasher is and why he ended up dead in the slough. When they uncover his identity as one Tam O. Shanter attending his 50th high school reunion, there's no holding this oddball investigative crew back. They are in it until the bitter end, and the road there is a twisty, bumpy one.

Catriona McPherson is a born storyteller, and whether it's a gruesome, dark tale or a spirited, witty romp, she creates the characters who are perfect for their parts. The Last Ditch mysteries will entertain you page after page with humorous antics and witty dialogue. Lexy trying to straighten out her Scottish take on the American language is hilarious. I'm looking forward to the next adventure this charming Scot and her friends jump into with a ready smile.

Thanks to Midnight Ink for an ARC of Scot & Soda and to Catriona McPherson for a grand story that kept me in stitches.