Someone We Know by Shari Lapena: Reading Room Review 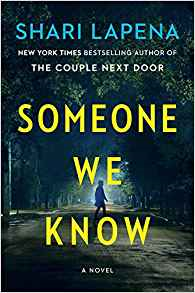 Shari Lapena is one of those authors who is consistently adept at creating suspenseful, thrilling stories for readers. No writer is better at dealing with the secrets people keep from one another--from their husband, from their wives, from their children, from their parents, from their neighbors, from their co-workers. Secrets have a way of compounding into more secrets and lies, and Lapena may have just given us her most layered set of secrets yet in Someone We Know. And, if you love twists like I love twists in a story, you will be delighted that this book will make you hang on to your seat as you take one hairpin turn after another. The brutal murder of a young, attractive wife from an upstate New York, middle-class neighborhood presents a closed room like scenario, with one neighbor and then another becoming a suspect. With all those secrets behind closed doors, whose secret is the one that leads that person to commit murder.

Olivia Sharpe is worried that her sixteen-year-old son Raleigh is too unfocused in his life and getting lazy, but when she discovers that he's been busier than she thought, she yearns for the problem of laziness. After seeing some damning text messages on Raleigh's phone, Olivia listens to him confess to breaking into houses in the neighborhood and hacking into the residents' computers. Filled with guilt over what her son has done, but not wanting him to suffer legal repercussions, Olivia writes anonymous letters of apology to the two residents where Raleigh says he broke in. She drops them into the mail slots of the houses before without telling her husband Paul that she wrote them and delivered them. In one of the two houses, a woman named Carmine lives by herself, and Carmine is most upset and determined to let the entire neighborhood know that there is a housebreaker among them. Olivia fears that Raleigh will be found out with Carmine's gossip, but then another neighborhood matter eclipses Raleigh's misadventures. A young wife, whose husband had reported her missing, is found brutally murdered and stuffed into the trunk of her car in a lake.

Thus begins an intriguing parade of neighbors who fall into the suspect pool, beginning with the dead woman's husband, Robert Pierce. His wife Amanda and he didn't have the closest of relationships, and Amanda was not reticent about seeking comfort elsewhere. Although Robert reported her missing when she didn't return from her supposed weekend with an out-of-town girl friend, his lies and omissions will come back to haunt him. The police detectives, Webb and Moen, leave no stone unturned in their investigation to find who killed Amanda Pierce and sent her to a watery grave. But, even these skilled detectives will change their minds several times as to who the murderer is and why. Before the final reveal, suspicions about infidelity and murder will wreak havoc in more than one marriage.

The story is told from multiple points of view, with the different neighbors adding their voices to the narrative, but it's not an omniscient telling. Lapena truncated the characters thoughts before anything revelatory could occur, until the very end when the secrets were all out and the characters' thoughts were completely accessible. The suspense builds with each character's newfound connection to the murder victim, but the reader is still guessing what those connections mean for the resolution of the story. I'd like to say that I figured it out before it became obvious, but although the killer's guilt did cross my mind at one point, and my reasoning was right about why, I had thoughts of others' guilt, too, leading me to different conclusions.  It's what makes reading a twisty book so much fun, the many possibilities. Shari Lapena is brilliant in writing domestic suspense or just suspense. Her pace is pitch perfect, and her characters are an excellent blend of likeable ones and repugnant ones. In Someone We Know, there are characters that could go either way, too, as they struggle with moral dilemmas of their own making. There are a good number of characters to keep up with in the book, but the continuity of interaction among them makes it easy to remember them and keep them straight.

From chilling prologue to chilling reveal, Someone We Know is a book readers will not want to close until the last intriguing sentence, a mystery from beginning to end, and then some.