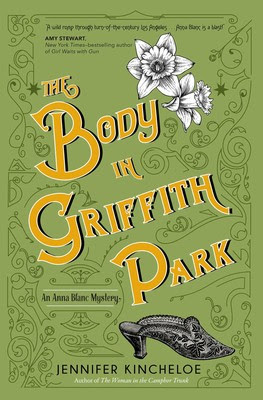 Reading a book in the Anna Blanc series by Jennifer Kincheloe is jumping into an exciting adventure with a lively, enthusiastic main character. It is rather like having a conversation with the author, because she, too, is an person full of enthusiasm, and it spills over to her creation of Anna. The phrase "never a dull moment" was invented for this series, and with the third installment of The Body in Griffith Park, Jennifer Kincheloe has established that the Anna Blanc series is one of the best new mystery/crime series readers will enjoy. I'm especially fond of the historical connections in the series, with the setting in the first years of the 20th Century, and Anna being a police matron in the Los Angles Police Department, where women are extremely limited to their involvement in actual crimes and investigations. Well, that is unless you're Anna Blanc whose fiancé Joe Singer is a detective in the department, a source for Anna intruding in places she doesn't belong, according to the LAPD and society. Her passion for crime solving is one not easily deterred. And, with the character modeled after a real female pioneer in the LAPD and the author meticulously researching the time period and activity of crime then, the authenticity of the series is a given. Of course, it is Kincheloe's outstanding storytelling skills that makes the stories irresistible.

1908 in Los Angles sees our disowned heiress and now hard-working police matron Anna Blanc madly in love with Detective Joe Singer but resisting his proposals that they should marry as soon as possible. Anna likes her freedom, and she doesn't quite trust any man to not want to limit it. She's also wondering who keeps sending her flowers that, having familiarized herself with the "language of flowers", she interprets as friendly but not too friendly. She knows it's not Joe because he would never do anything to bring attention to their relationship at the police station, where fraternizing with one another could get one or both of them fired. Another reason he's pushing for marriage.

The action of the story has three events that will expand and come together happening very quickly into the story line. Anna and Joe try go to a romantic, hidden spot in Griffith Park to finally express their passion for one another, but instead they find a dead body. As thrilled as Anna is to be on the scene of a crime in its initial stages, she does feel cheated that she and Joe once again must settle for a lingering kiss before she has to leave. So, the murder of a young man has occurred and will be pivotal to the plot. Next, Anna meets the man who has been sending her flowers, with Joe bopping the man in the nose after following her to the meeting. It's then that Ann learns the man's identity as her half-brother Georges Devereaux, and she discovers that her father had kept a French lover for years while married to Anna's mother. The third bit of action that comes into play is the arrival of a young girl named Matilda Nilsson, who reports that she has been dishonored by a man while living at the Jonquil Apartments run by a Mrs. Rosenberg.

Coming to terms with having a brother, a brother who is rich from Anna's father, unofficially investigating a murder, and trying to save young girls from being "spoiled" at the mercy of needing a place to live will be a full plate for Anna Blanc. There are no simple explanations or answers to any of it, and when Anna and Joe have different theories on the person responsible for the tangled web of lies, deceit, and murder, that difference will threaten to end their love affair before the affair part can even get going. There are so many dramatic and often comical situations in which Anna and Joe find themselves, usually at the instigation of Anna, that readers will fly through the pages in pursuit with them. The historical details of the story are fascinating, and the crimes themselves are taken from actual cases. I'm betting that readers will be surprised by certain details, such as someone having their own rail car to attach to a train when they travel.

The characters are absolutely ones that the reader will want to know more about, and the author obliges the reader in this. Anna's family tree is certainly filled out in this story, and her father shows up in the story, too. He's still an unforgiving twit, but Anna no longer kowtows to his wishes or his shaming of her. Anna's brother, Georges, and her true love, Joe, will butt heads, but Kincheloe shows us the different kinds of love that a person needs in life through this. The police station crew and the girls and women coming through the station are all of great interest, too, and Kincheloe is a master at showing the glimpses that tell the most about these characters. Of course, it all comes back to Anna and the breath of fresh air this character is in crime fiction. Her love of hats and crime and Joe and protecting those who need it make her a formidable force, and her feisty, fearless nature makes every adventure with her thrilling.

The Body in Griffith Park is the continuation of a story of which I just can't get enough. I think readers will love it for so many reasons, and I am looking forward to #4 in the series with great anticipation of reading pleasure.