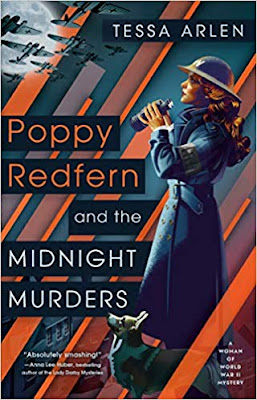 When I first saw the title and cover of Poppy Redfern and the Midnight Murders several months before it was published, I was smitten with both. I was almost afraid to read it, unsure if Poppy could possibly be a character as great as her name or the story could possibly match that stunning cover. Well, she is, and it does. The history and the mystery are combined beautifully. The English village of Little Buffenden in 1942 is a charming setting, despite murder seeping into the dark of night. I’m a fan of stories that show the importance of women during WWII, and this book does that, showing the courage, commitment, and sacrifice required by the British women on the home front.

There has been an invasion in the village of Little Buffenden, but it’s a friendly one. American pilots and Airforce personnel have arrived to man the newly built air base adjacent to the village. There are mixed feelings towards the soldiers, a welcome for the much-needed help against the Germans they provide, but at the same time resentment that help is needed from them. Poppy Redfern and her grandparents have reason to resent the Americans, as it is the Redfern’s family home of Reaches and farmland that have been requisitioned and turned into the new airfield. But, they seem fine with their temporary lodging, as they are honor bound to do their duty and make the sacrifice in the war effort. Young and enthusiastic, Poppy has just returned from London and her training to be the air-raid warden for Little Buffenden, and she is eager to help keep her village safe. Making the rounds at night to ensure that all the villagers have properly secured their blackout curtains and that they understand the dangers of non-compliance, she is accompanied by her small dog Bess. But, when danger shows up, it’s not the Germans bombing them in the dark, it’s a murderer preying on the young women of Little Buffenden.

Poppy has barely started her job as ARP Warden when Doreen Newcombe, a young woman whom Poppy had known since a child, is found strangled. Doreen had been dating an American serviceman, and the villagers immediately cast suspicion upon him as an outsider. When another young lady is found murdered, Poppy’s doubts about an American being responsible for the murders prods her into doing some of her own investigating. She’s encouraged and aided by handsome, charming American pilot Griff O’Neal, who is concerned about American servicemen being blamed and who also provides the romantic element of the book in connection to Poppy. The list of suspects in the murders are eliminated one by one as Poppy digs into alibis and motives, and the shorter the list, the closer Poppy is to becoming a victim herself.

Poppy Redfern and the Midnight Murders is the first in A Woman of World War II Mystery series by Tessa Arlen, and I’m happy to say that it was a smashing success for me. In the beginning of the book, Arlen acknowledges her father and grandfather for the many stories of WWII that they shared with her. It’s quite obvious by the details of the story, from the bombings in London to the daily rationing in Little Buffenden, that the author listened carefully to her primary human sources and then did continuing research to give the reader not only an accurate depiction of the time, but a sense of being there. Bringing history alive in a narrative takes a special skill, and Tessa Arlen has that skill, the ability to make it personal and approachable.  There is even an appendage at the conclusion of the story explaining certain unique aspects of Britain’s home front during WWII.

The characters for this new series have had a great start in development in this first book, with the main characters, especially Poppy, gaining a firm foothold in WWII England and her part in serving her country. I especially like that Arlen sets up expanding possibilities for Poppy’s role in doing her duty, and her personal life is wide open, too. No closed boxes here, lots of room to grow. Poppy will endear herself to readers as a plucky, fearless, compassionate young woman who takes her responsibilities seriously and doesn’t stop until justice prevails. Readers will be eager to see where those responsibilities lead her.