You Cannot Mess This Up: A True Story That Never Happened ~ Reading Room Review 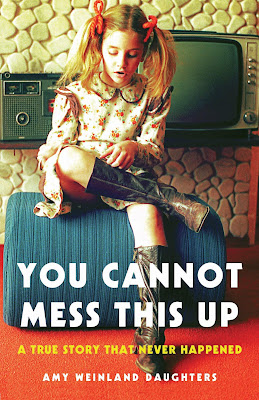 If you could travel back in time and not only observe but interact with your ten-year-old self and your then family, would you? Amy Weinland Daughters imagines herself doing just that, and the result is a fictionalized account of how as a forty-six-year-old adult Amy confronts her memories head-on. The very person she grew up to be, the wife and mother she became had their roots in the feelings and evaluations of her place in her family. Her relationships with her father and mother and siblings sprung from her perceptions of this family life. Would her perceptions be validated, or would they be turned upside down by a visit to her childhood? What would Amy learn about there being more than one side to a story? Is the title of the book accurate, that she cannot mess this up?  You Cannot Mess This Up: A True Story That Never Happened seems both a dare and a promise.

Amy's trip back to 1978, from 2014, begins as an innocuous flight from Centreville, Ohio to Houston, Texas. Her husband Willie’s boss is married to a small plane pilot, who offers to let Amy tag along on a flight, as they are both going to Houston at the same time. Amy needs to get there a day ahead of her husband and sons, who will arrive on Thanksgiving Day, to attend a financial meeting with her father, Dick, and her siblings, Jen and Rick. Amy is the proverbial middle child of this family, with Jen being the "golden child" and Rick being the male heir to the family name.  Falling asleep shortly after take-off, Amy wakes up to find quite a shocking turn of events. She and Mary are wearing different clothes, and by different, I mean clothes from another time. Here’s the description of Amy’s new attire:

“My skinny jeans, boots, and sweater had morphed into some snug-fitting plaid pants. The color combo was mesmerizing—a blaring yellow-gold background, like the harvest-gold refrigerator my mom had in the ‘70s—offset with a brown check and narrow white gridlines. It was as if a roll of Scotch tape had exploded on my legs. Then there was a turtleneck sweater, ribbed, I suppose, for my pleasure. It was the same yellow-gold as the pant. It was seriously tight and for some unknown reason had a zipper at the back neck opening. I couldn’t see it, but I could definitely feel it.”

Mary explains the bizarre turn of events. Amy is going to spend Thanksgiving Day 1978, which is apparently today, and the next day until 5:00 p.m. with her family of 1978, in their home of 1978, and that includes her ten-year-old self. The cover story is that she is a writer, which is true, and she has come to meet with someone in Houston about her writing. She is unable to make her returning connection to her home in Ohio and is thus going to be spending Thanksgiving with her cousin Dick, really Amy’s father, and his family. Apparently, Dick is going to buy this story.

Amy is in flash-back heaven as Mary drives her through the trendy subdivision of her 1978 childhood. It was nothing short of idyllic. When they arrive at Amy’s past home and family, she approaches it with much trepidation. Will this actually work? Will she be able to fake it and not slip up with her 2014 world spilling out? She seems to be the only one ill at ease with the task. Her 1978 family is welcoming, and Little Amy (present Amy becomes Big Amy, as she keeps her name) is an exuberant greeter indeed. Big Amy thinks maybe Little Amy is acting like a bit of a freak, but that’s not a complete surprise. Shown to her room, the only room on the third floor but conveniently with a bathroom, Amy unpacks her suitcase and realizes that everything in it is 1978 appropriate, even the make-up and sanitary napkins.

It’s easier than Amy feared to slip into the routine of the household as her mother prepares Thanksgiving dinner. She has alone time with all the family members and group time with the kids. She is surprised and thrilled by meeting her beloved dog Cecil again, too, and because dogs are dogs, Cecil recognizes her. There is a lot packed into the 36 hours Amy spends in 1978, and she gets an adult’s view of the family’s interactions and words, including both sets of her grandparents. The tension she never realized as a child that existed between her grandparents comes as an eye-opening revelation. The adult Thanksgiving night party is also a completely new piece of information to Amy. And, the everyday items of life were so less advanced than the time Amy had occupied just a few hours before. A television got only a few channels and much of that was poor reception, but no one seem frustrated by it. It was all they knew. Amy is disappointed in herself that she let so many things go seemingly unnoticed that she felt she should have noticed. Of course, she does recognize that a ten-year-old might not be as observant as a forty-six-year-old. After all, a child’s view is quite egocentric.

All along, Amy is writing pieces of information and questions in a notebook, as there are so many comings and goings of the ordinary pieces of life that she never noticed. For example, how had she never realized that so many of her favorite popular songs on the radio as a child had adult lyrics? When did remote controls for television sets come into existence? Amy was constantly checking herself to not say such words as iPhone or Starbucks or cable TV. As you stand and look around your home today, you might ask yourself, when did laminate floors become available? Or, has the mail always been delivered six days a week? Or, when did the wall phone become popular and when did its use die out? When did the microwave oven become an everyday kitchen fixture, and when did the air fryer start to take over? And, when did skinny television sets replace the big heavy ones?

I thoroughly enjoyed this humorous, heartbreaking, renewing journey of Amy Weinland Daughters back to her birds-eye view of her ten-year-old world. It is filled to the brim with interesting contrasts between 1978 and 2014. It examines how people view the same conversation or event differently, and how we too often fail to consider another person’s experience of it. And, memories, can they be trusted? Reading You Cannot Mess This Up played to my fantasy of traveling back in time to my childhood. How many things did I not notice or view differently than others? Did my whistling in the back seat of the car produce a headache for my father as he drove instead of a cheerful tune? Is that why he asked me to stop? Reading this book will have readers re-examining some of their childhood moments, too, and that’s one of the best parts of reading, how we relate personally to it.

Although my favorite reading is mystery/crime, You Cannot Mess This Up was a delightful departure from it. As describes the reactions to so many stories of the heart, I laughed, I cried. The awkwardness of Big Amy’s dealing with an adult education of her previous family life and the love and compassion she feels for Little Amy create plenty of humor and heartache. There are touching moments and moments of utter frustration. Mary tells Amy before she enters her time warp home that she will have questions. But, will Amy gain the answers she needs? It’s a wild thirty-six hour ride for Amy and the reader to determine that.