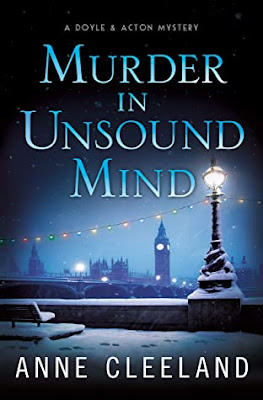 There are certain plot points on which you can rely in an Acton and Doyle murder mystery by Anne Cleeland. Acton will be trying to keep Doyle out of harm’s way or away from those cases in which he has a finger in the pie. Doyle will be trying to suss out what Acton is up to and involving herself in the very cases that Acton is attempting to steer her from. While DCI Michael Acton is a powerful man, a man of many resources, DS Kathleen Doyle brings her own resources to the contest, her Irish fey abilities of knowing the truth when she hears it and her ghostly dream intruders who push her along to the answers she seeks. Acton’s game gets flushed out by Doyle every time, but it’s never easy. Watching it all play out between two of my favorite characters in the mystery/crime genre is a scenario of which I never tire.  Murder in Unsound Mind, #13 in the series, continues to give readers an intriguing story with unique characters who are still capable of surprising.

Having had his worst nightmare come true in the last book, Murder in Retribution, Acton is hell bent on nothing dangerous touching his wife or son again. Acton zeroed in on revenge and protection is an unrelenting force. As a result of her husband’s over-protection, Doyle, pregnant with their second child, is struggling to get assigned anything of interest in her police work at Scotland Yard. She fears Isabel Munoz, her arch-rival at work is getting ahead of her in interesting cases and causes for promotion. There are cases tying in with the last book and the criminal activities at the health clinic investigation. And, there are those loose ends Acton is tying up. Yet, it is Munoz who calls Doyle to the scene of an interesting murder, one that Acton would probably rather she avoid.

A young woman in her thirties, who was the office manager for Acton’s and Doyle’s best friend Dr. Timothy McGonigal, has been found dead in Dr. McGonigal’s office suite. The arrangement of the body and message left behind suggest a murder of unsound mind, which obviously means the murderer was not in his/her right mind when the murder was committed. Doyle has her doubts about it being an unsound murder due to certain “sound” aspects of it. When Acton arrives on the scene and examines it, he has a likely suspect in mind, Martina Betancourt. This links back to the nightmare that occurred at Acton’s and Doyle’s flat in the last book, as Acton reveals that the newly dead office manager had an affair with Martina’s husband, whom Martina helped to heaven last book in the Acton's flat.  So, Martina, who is currently free and awaiting trial for her husband’s murder, is arrested and placed under psychiatric surveillance. Nice and tidy, but of course it’s not.

The fallout from that horrendous event at the residence of Lord and Lady Acton has long reaching tentacles of cause and effect, and Doyle’s fey senses have her head tingling in alarm that not all is as it seems. One of Doyle’s ghostly intruders, this time Dr. Harding, is urging her to connect the dots in determining what Acton is up to. When she discovers that the murdered office manager was a witness in their case against the medical clinic and that another witness has also met a tragic end, Doyle knows she will have to dig deeper to uncover what lies beneath it all and if Acton is calling the shots.

Then, there is the other thread snaking its way through the book, which promises to continue to the next book. Edward (Doyle’s and Acton’s son) is under the care of sweet Mary, the nanny whom everyone loves. One of those who love her is her husband Howard, and Howard was loved first by Lady Abby. Lady Abby is not a good loser, and she once again shows up to spread her crazy around. This time Abby has a secret that could endanger careers and reputations. She must be dealt with, but by whom and how.

One of the best parts of the Acton/Doyle union is how they care for each other. Acton’s concern over Doyle’s eating enough during her pregnancy and taking care of herself. Doyle’s early recognition of Acton drinking to keep the darkness of his worries at bay, a behavior he has greatly curbed with her guidance, but which he thinks she won’t notice now. Then, Doyle has been dealing with an injured hand that has been bothering her since the incident at the flat, and she thinks she can keep that hidden from Acton. Neither is successful at keeping the other one from noticing their problems, and it is the tender way they deal with one another over the problems that endears this couple to readers so much. They seem such an odd match at first glance, but they are absolutely perfect for one another.

At this point in my reading and discussing Anne Cleeland’s writing, the Acton and Doyle series and her romantic adventure books, too, I have probably sung Anne’s praises with an untold number of superlatives. However, I don’t think I can ever thank her enough for creating the Acton and Doyle series that gives me such a thrill reading each book. Fans of this series, and there are many, aren’t just fond readers. We have rather the same diagnosis as Acton in his uncontrollable passion for Doyle, happily addicted.