Murder on the Commons (Davies and West #4) by Will North: Reading Room Review 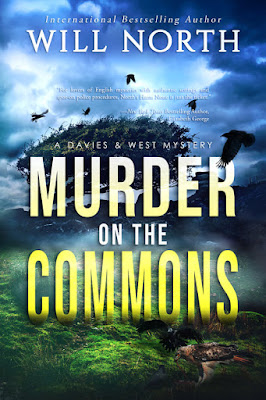 It’s been too long since we’ve had a Morgan and West book to read from Will North, but it’s always hard to wait on the next book in a favorite series. The fourth book in the series, Murder on the Commons, is out tomorrow, and it’s well worth the wait. The setting is still the fascinating Cornwall, England countryside, a place of rich history and long-lived traditions. Although we are still in the same place geographically in book #4, we are hardly standing still. North doesn’t let his characters drag in place; this new book is full of new life and moving forward. And, he moves those characters forward with the smoothest of transitions, where minor characters are becoming more important to the story, but the major characters are still strong in their purpose.

When the call comes in from Poldue Manor about a human head discovered sticking up out of the mire on Rough Tor Mire on the Bodmin Moors, it first goes to the police headquarters in Exeter, but the Bodmin Serious Crimes Unit immediately becomes involved because Bodmin DCI Arthur Penwarren has a personal connection to the landowners where the victim was found. Penwarren’s ex-wife is the sister of the Lady of Poldue Manor, and his niece-by-marriage, Jan Cuthbertson, discovered the body/head. With the land-owning aristocracy requiring a delicate handling, Penwarren is the perfect person in this situation to do the handling, and, of course Detective Chief Superintendent Crawley is only too happy to stay in Exter and let Penwarren do the work and suffer any fallout from unhappy lords of the land. These lords on the Bodmin Moors go back centuries, and the presence of the Cuthbertsons of Poldue Manor dates back to the mid-sixteenth century. Longevity of generational ownership is valued, and outsiders are not welcome.

Penwarren’s top police officers in Bodmin, Detective Inspector (DI) Morgan Daviess and Scene of Crimes Manager (SOCO) Detective Sergeant Calum West are on medical leave. West has had an operation on his heart and Daviess is caring for him and helping with his two young daughters. Penwarren isn’t too worried though, because Daviess’ second in command Detective Sergeant Terry Bates and her partner Detective Constable Adam Novak seemed ready to step in and make their mentors proud. Of course, an interesting, complicated case such as this one proves to be way too interesting for Davies and West to sit out. The mystery of the body’s location, with just the head sticking out of the mire, and the many unknowns lure both West and Daviess back, with a doctor’s consent for West, almost immediately.

Identification of the body is the first puzzle that must be solved in the case, and it’s through tattoos a break finally comes. The next question is “What the hell is a Liverpool cage wrestler doing dead in a mire in Cornwall?” It falls to DS Terry Bates to travel to Liverpool and liaise with a senior Merseyside detective to search for answers as to why Harold Lugg ended up dead on the Bodomin Moors, far away from his home. Meanwhile, Callum West, as Scene of the Crime expert, is struggling with there being no scene of the crime, and Morgan Davies is finding the daughter of the manor, Jan Cuthbertson, an unreliable source of information. Jan is hiding something, and if anyone can uncover it, the unrelenting Davies will. DC Novak shows his value to the team by his Cornwall family connections, which aid in uncovering vital information. Arthur Penwarren is also knee-deep in this quagmire of connections, as he discovers his former sister-in-law’s life at Poldue Manor is a nightmare of unpredictability, and she is depending on Penwarren to help her. The investigation stretches the team and its resources to the max as simultaneous efforts must be coordinated from Bodmin to Liverpool to Dublin, Ireland. The Bodmin Serious Crimes Unit soon recognizes that the odd head above ground in the mire was just the tip of the iceberg in a ring of crime and corruption with a political bent.

I enjoyed how Will North pushed in this fourth book to include more involvement from what had been minor characters. While Daviess and West have not by any means been replaced by Bates and Novak, North shows that the Serious Crimes Unit can expand its resources without losing any original favorites. There are hints at Penwarren’s retirement, but there’s not really any reason to think he’s going anywhere anytime soon. Of course, I trust the author’s plans for his characters, as North never disappoints me in their development. I think it was a act of brilliance how he managed to freshen up the series without taking away any of its original appeal and charm. As I’ve mentioned in reviews of earlier books in this series, Will North is especially adept at making the setting authentic. He has spent lots of time in Cornwall and brings a love of the area to his books. However, the descriptions for this series are never heavy-handed, just woven into the story enough to ensure the charm and beauty of Cornwall shines through. And, I would be remiss if I didn’t add that at the core of Will North’s thrilling books is that he has the heart and soul of a storyteller. Combining North’s great characters and authentic setting with great story assures readers that every book you read by this author will be one to remember.

I received an advance copy of Murder on the Commons from the author, and I can assure readers of this review that my praise for this book is based solely on its contents.