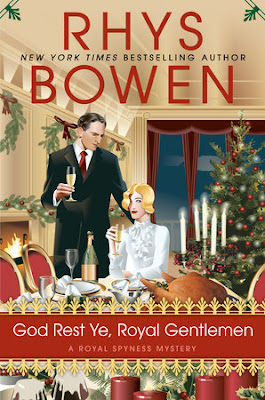 Lady Georgie never disappoints me. I can only describe as "adore" the way I feel about this entertaining character created by Rhys Bowen. Even with murder in the mix, it is a fun series that combines my loves of England, mystery, humor, and history. The author never claims that Her Royal Spyness is an historical series, but there is much history to be had, as in clothes, food, locations, and even certain facts about the royal family under King George V. Of course, there are liberties taken with the royal family history, but it's never anything misleading. But, it is Lady Georgie and her life and the interesting people around her that brings such satisfaction to readers. The stories are always take us on a thrilling journey, and I confess that the stories set around Christmas are some of my favorite. This year, I was excited to know that the 15th book in the series was a Christmas one, and not just that, but the first Christmas that Georgie and her husband Darcy will share as man and wife. God Rest Ye, Royal Gentlemen came out in October, but I saved it for a read when the Christmas rush was through, and I could settle down with nothing but reading it on my mind.

Lady Georgie no longer must be at the mercy of others' kindness as to where she'll live or spend her holidays. It's 1935 and she and Darcy are looking forward to spending their first married Christmas at Eynsleigh, their home in the Sussex countryside. And, they will have the company of Georgie's family, who include her grandfather, her brother Binky, her sister-in-law Fig, and her young niece and nephew. Putting up with cantankerous Fig will be somewhat easier than usual since she's bringing their long-time cook with them to Eynsleigh, so Queenie won't be alone in the kitchen. (Yes, Queenie is now a cook, if you aren't up to date.) Claire, Georgie’s peripatetic mother, has even blown in from Germany where she is currently residing with her wealthy boyfriend Max.

But, Christmas in her lovely home is not to be for Georgie. A letter has arrived from Darcy's Aunt Ermintrude requesting their presence at her Christmas gathering at her home, which happens to be a grace-and-favor residence on the edge of the royal Sandringham estate in Norfolk. Georgie and Darcy recognize the invitation for what it is, a summons from the Queen, so they have no choice but to accept. The cars are loaded, and the Christmas party is off to Norfolk, except for Grandad and Fig's cook.

It doesn't take long for Georgie to figure out why Queen Mary wanted her to stay at this particular aunt’s house. One of the guests is Wallis Simpson, whom the Prince of Wales deposits at the house to keep her close while he is required to attend Christmas functions at Sandringham. Mrs. Simpson has been kept out of the public eye due to her relationship with the Prince and her not yet being divorced, so the Prince has arranged the Christmas gathering at Aunt Ermintrude, who used to be a lady-in-waiting to Queen Mary, to keep Wallis secreted. The Queen wants Georgie close so that she can check with Georgie what is going on with Wallis and David. With Georgie's mother, Claire, also staying at Ermintrude's, the reader will no doubt enjoy Claire's and Wallis' snarky comments to one another.

Another pressing matter is that King George's health is quickly failing. Queen Mary is hoping to keep the Christmas festivities drama-free for her husband, which is another reason she's relying on Georgie to help with the Prince and Mrs. Simpson. Everything is being done to make this Christmas time at Sandringham enjoyable for the King, even some brief shoots are arranged, although King George is barely able to lift his gun. It's at the first shoot that the Prince of Wales is nearly shot, a close call that seems more than an accident.

When the Prince’s equerry inexplicably falls from a horse, the Prince’s horse, and dies, there are echoes of a similar death from the previous Christmas at Sandringham. And, the question that’s thick in the air is whether the intended target was the equerry or the Prince. The Queen asks Georgie to help uncover what truly is happening at Sandringham and tells Georgie that she feels an evil surrounding them. Dealing with a disgruntled group of house guests at Aunt Ermintrude’s and trying to root out a possible murderer, Georgie has her work cut out for her.

One of the most enjoyable parts of this book for me was the descriptions of the different Christmas and house party traditions, from foods served to the gathering and decorating with the greens to the games they played to pass the time. I can’t say that I was a fan of the breakfast menu, with its kippers and kidneys, nor the pheasant that was so common, but it was indeed interesting. I felt as if I was getting a real peek inside an English Christmas, knowing, of course, that it was a Christmas celebration of the upper class. Rhys Bowen is always spot on in the details she includes to help the reader envision the world in England at that time. As the year is 1935, almost 1936, the time is drawing close to WWII, and Bowen brings that into Georgie’s world, too, via her mother’s boyfriend Max in Germany, who in his position of manufacturing, will dine with the Goebels for Christmas. I can’t help but wonder if Claire will leave Max soon, as she has no taste for Nazi company.

I’d like to thank NetGalley for an early copy of God Rest Ye, Royal Gentlemen. I waited to read it right after Christmas though, because that’s when I wanted to enjoy my Christmas read. Enjoy it I did, and I highly recommend it at any time of the year.