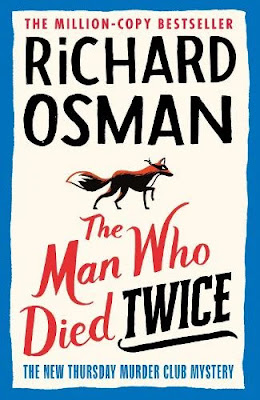 When I read last year's The Thursday Murder Club by Richard Osman, I was thrilled with its unique entry into the mystery/crime genre. Yes, I know. There have been senior citizen detectives or amateur sleuths before, but here was a group of septuagenarians living at a retirement home in Kent, England who have banded together to add some excitement to their lives by reviewing unsolved murder cold cases. Elizabeth, Joyce, Ron, and Ibrahim find murder and crime right under their noses though. The resourcefulness these four bring to the table is impressive, even to local constable Donna DeFreitas and her boss, DCI Chris Hudson, who by the end of the first book become friends of the Thursday Murder Club members. After falling hard for these characters and their witty camaraderie, I expected book two, The Man Who Died Twice, to be one of my best reads in 2021. Well, it was and then some. I saved this book until the end of the year, and I was rewarded with a read that ended the year on a very high note.

Again, the investigations of our intrepid foursome are sizzlingly current and not of the cold, forgotten kind. I'm hesitant to give much information on the plots weaving throughout the book that find common resolution in the end. There's just too much to enjoy discovering in the story on one's own. The Thursday Murder Club becomes involved in a case spiraling in from Elizabeth's past, her past as a senior MI5 operative (spy). The first book hinted at Elizabeth's adventuresome and dangerous past, but book two lets the cat of her past out of the bag completely. She is contacted by a former spy associate who is still in the business, and he needs her help. He happens to be Elizabeth's ex-husband Douglas, who is hiding out in an apartment at Cooper's Chase. Douglas and another MI5 agent broke into the home of Martin Lomax, a middle man and money launderer for criminals all over the world. Lomax reports a bag containing millions of dollars of diamonds missing after the break-in and accuses Douglas of their theft. Being a marked man, Douglas has turned to the best spy he ever knew to get him out of his mess. Elizabeth and her friends decide to take on the task. Meanwhile, Donna and Chris are working to bring down the local Fairhaven drug king pin who happens to be a queen, Connie Johnson. Readers can expect cross-over action. One point of much interest is that Ibrahim will be doing any of his work strictly from his home, due to injuries he receives at the beginning of the book. The way he receives his injuries is yet a third part to the story, as there is retribution to be dealt out for it.

The characters are what drive these books and provide the witty dialogue and inventiveness of the investigations. Elizabeth, Joyce, Ibrahim, and Ron find friendship and purpose in their “golden” years by using their brains and individual skills to show just how valuable they are. We come to know this group as interesting, vital people, not ready to be put out to pasture or ignored. Of course, they must deal with mortality, as they do live in a retirement home where death is no stranger, and they can’t help but think about their own at times. Yet, the reader will see far more optimism here than negativity. These sleuthing friends display an energy that defies age. And, there are younger characters, too, who make this story sing. The give and take in the relationship between Donna and Chris is delivered brilliantly through their entertaining dialogue. Donna has arrived in her boss’ life at just the right time for him, and the Murder Club has made a timely arrival in Donna’s life as well. In The Man Who Died Twice, these two characters reveal more of themselves, and when Donna introduces Chris to her mother, we gain another dimension to Chris that endears him to us even more.

One of the vehicles Richard Osman uses so cleverly in this book, and the last, to move the action forward is Joyce’s journaling. Her journal entries fill in blanks for us and help to bring loose ends together in what the Murder Club is doing in their investigation. It also gives us a more personal and fleshed out view of Joyce, such as her relationship with her daughter, and the others. The journal serves as a smooth segue from one scene to another, while enhancing our emotional investment in the characters. Readers will be pleased to see Joyce make great strides from Elizabeth's shadow in book two.

I had heard amongst the buzz circulating around this second book that it was even better than the first. I think what prompts that statement is that readers are past the introductory phase with these favorite characters and are now deep into their hearts and minds. And, it's the expansion of the character base, too, getting to know Elizabeth's husband Stephen better and Ron's grandson Kendrick and Stephen's chess partner/Elizabeth's heavy lifter Bogdan. It's easy to think of The Man Who Died Twice as even better than The Thursday Murder Club because we now feel right at home at Cooper's Chase Retirement Village.