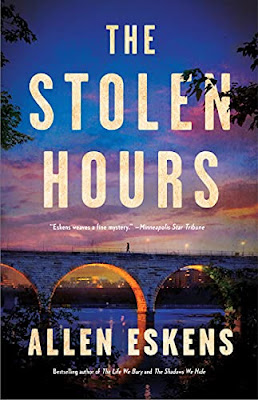 It’s difficult to know where to start in reviewing a book by Allen Eskens, as I immediately want to talk about all the books by Eskens that I’ve read. There’s a reason his other books come rushing back at a reader when talking about his latest. This brilliant author has cleverly connected his books through a myriad of fascinating characters who might appear as a main character in the book, or that character may only be referenced in passing in another book. But there is a history of connection that persists, as the different characters take center stage in different stories. A connection is never far away. Nothing More Dangerous is one of my favorite Eskens books that deftly deals with racism on a scale of the classic To Kill a Mockingbird, and that particular Eskens book, set in 1976, features Boady Sanden as a fifteen-year-old struggling teenager. Fast forward to the latest Eskens book, The Stolen Hours, and the adult Boady is but a footnote in it, but his connection to the main character is clearly influential.

So, we arrive at The Stolen Hours, a story in which Lila Nash has progressed from aspiring college student to a graduate of law school and working in the Hennepin County prosecutor’s office as a beginning prosecutor. Joe Talbert is still by her side, and the case she helped Boady Sanden with when she was a law student is a factor in her future with the prosecutor’s office. We were introduced to Lila and Joe in Allen Esken’s debut novel, The Life We Bury, which focuses on Joe and his hard-scrabbled fight against his background to become a college student and make something of himself. Lila is also an undergraduate college student then, and together they get involved in an old murder case. The Stolen Hours sees Lila and Joe still together, with Lila now having graduated from law school and Joe a reporter for the local newspaper. Life is good for two of the good guys in these stories, and Lila’s issues from her past, although still lying there, are hopefully a dormant tragedy. Of course, dormancy is a fickle monster, and working in the very department of prosecution that handles the cases it does is a constant reminder of what lies hidden. Only Lila’s therapist from that time knows just how devastating a secret Lila has been hiding. No one knows how she still counts her steps when walking as a coping behavior.

Lila is out of law school, but she still must gain acceptance to the Minnesota legal bar upon learning her bar exam results. Her goal is to become a prosecutor in the sex crimes division of the Hennepin County Attorney’s office in Minneapolis, and it is there she has landed a job as a beginning prosecutor. Usually, the beginning prosecutors see some court action early on, but Lila’s supervising prosecutor has kept her working at her desk. When the head prosecutor of the department is in an accident and out of commission, Lila gets a lucky transfer. The temporary department head reassigns Lila to a tougher supervising prosecutor, Andi Fitch, who wants Lila in court asap. But, luck can be a double-edged sword, as it comes to light that the new department head is a man named Frank Dovy, someone who has a huge grudge against Lila and is trying to set her up to fail.

A case soon comes up for Lila when a young woman is rescued crawling out of the Mississippi River, barely alive. She didn’t get in the river on her own, and when a man becomes a suspect for rape and attempted murder of the woman, Lila takes an intense interest in obtaining justice for the victim. The suspect is a local photographer named Gavin Spenser, and there’s no question in the story as to whether he is guilty or not. He is. However, this is not his first victim, just the first one that’s lived. He’s long been prepared for getting caught and has taken extraordinary measures to cover his trail. To him it’s all part of the sick game he plays. Whenever the police and prosecutors think they are onto some solid evidence, Gavin has already dealt with it, and it becomes a weak link. But, the case is personal to Lila, who must deal with her own demons from an assault eight years prior, and before this story is over, the case takes a turn of unexpected horror for Lila.

The Stolen Hours, as with all of Eskens’ novels, is character driven. He uses third person limited POV, with alternate chapters allowing readers to be inside the heads of Lila and Gavin Spenser. We see how Lila struggles to overcome her past trauma to become the person who can obtain justice for other victims of sexual crimes. We also see how dark a mind Gavin Spenser has, what evil looks like in a person devoid of any morals. It’s a chilling view. The story unfolds as a suspense-filled race with the wits of these two characters pitted against one another, each one determined to break the other. The reader will feel Lila’s frustration as Gavin always seems to be one step ahead of the police and the prosecution. The scenes with the police detectives, Niki Vang and Matty Lopez, their investigation and revelation of it through well-placed dialogue filled episodes, flow smoothly throughout the narrative. Readers of Eskens’ books will remember the character of Niki Vang as the detective partner of Max Rupert. I enjoyed her reappearance. This story stands on the shoulders of its strong women, starting with Lila Nash and extending to Niki Vang and Andi Fitch. While The Stolen Hours is pegged as Joe Talbert #3, a more accurate description would include Lila Nash, as it’s Lila that stars and shines in this most recent book. If there were any doubts as to how tough and smart Lila is before you read this book, you will know for certain that she is the real deal after you finish the reading.

Allen Eskens is a master at telling a story with multiple layers, kneading and pulling and braiding it into one cohesive unit. No slack dough here. The links are impeccably joined and the piece de resistance of his storytelling. And, if you’re impressed, which you should be, by Eskens’ combining past and present to resolve the problem at hand, then impressive doesn’t begin to cover the author’s revolving door of characters in all his books. Of course, even though Lila has appeared in previous books (#1, 3, and 5), The Stolen Hours is her first time being the lead character and Allen Esken’s first time having a female lead character. I love that I get to visit with some of my favorite Esken characters in the different books. Eskens on his website says of this aspect of his books, “My books are not a series, but rather character arcs that revolve around a small community.” He also includes a breakdown of what recurring characters are in what books.

There are now seven Allen Eskens books with unforgettable characters and compelling stories. You can read them out of order and not be lost. You can read The Stolen Hours and appreciate it for itself. However, I do encourage readers to read all the books, as their intertwining histories are irresistible. I can highly recommend this particular book for its spectacular spotlighting of the female characters who are so important to this community of Allen Eskens’ creation. I can hardly wait to see what this favorite author of mine gifts readers with next.