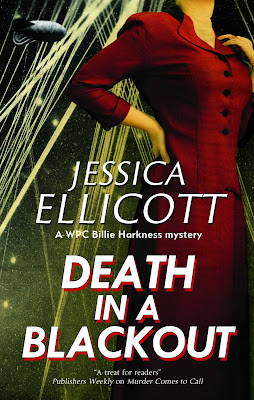 I read quite a bit of WWII fiction, especially mystery/crime, set in England, but most of it is set in London. Of course, London does have so many stories from which to draw of that infamous period of history, so I’m deeply interested in all that London has to offer on the theme. I enjoy learning about how the ordinary citizens of England lived and coped and did their bit in the war. Death in a Blackout by Jessica Ellicott has expanded my knowledge and interest beyond London to Hull, or Kingston on Hull, a northern port city at the confluence of the River Hull and the Humber Estuary. “With ninety per cent of its buildings damaged or destroyed, it was the second most bombed city in England during the war.” (Jessica Ellicott, Author Notes) I knew nothing about Hull’s WWII history going into reading Ellicott’s book, and now I’m in awe of their perseverance and dedication. Death in a Blackout features as the main character one of the newly recruited WPC who began working on the police force in Hull in 1940. Wilhemina/Billie Harkness is the second woman to be hired, as the scarcity of men paved the way for women to finally be admitted to the ranks.

Billie Harkness arrives in Hull the afternoon of Hull’s first night air raid attack. She has come from the bucolic setting of Barton St. Gilles in Wiltshire at the invitation of her cousin after Billie’s mother meets with a tragic accident. Billie’s father, the rector of the local Anglican Church in St. Gilles, is a prisoner of war, and her brother is serving also, but at an unknown location. As Billie and her mother were still living at the rectory with the curate, who had assumed Rev. Harkness’ duties, Billie finds herself living alone in the house with the curate, a situation unacceptable to the town’s moral code. After a hasty and unromantic proposal of marriage from Ronald the curate, Billie takes the first train to Hull.

Lydia, the cousin, is delighted to have Billie visiting for as long as she wants, and Billie is stunned to discover Lydia living by herself in a thoroughly modern-styled house in an upscale housing community. Lydia wants to show Billie a hearty welcome by taking her to the movies and dinner in town that night. But, as the movie is playing, there are thunderous sounds and shaking, and an air attack is announced over the theater’s speakers. Too late to try to reach one of the city’s shelters, Billie and Lydia ride out the air raid in the theater.

When the attack is over, they come out into a wide swath of destruction to the surrounding buildings. Billie notices the tea shop she had stopped in on the way to Lydia’s house had been hit, and upon further inspection, Billie comes upon the body of a young woman in the shop. It’s a customer whom Billie had seen in the café when stopping in for a cuppa earlier. The young woman is dead, but Billie notes that the building is still standing at the time and there’s nothing to suggest the woman has been killed by falling debris. Billie suspects foul play, but before the constable whose attention Billie has caught can investigate or search for any evidence, the café falls in on itself.

Billie’s worries about what kind of work she can find in Hull are somewhat relieved when Lydia tells her that she can accompany her to the library where she works. Lydia knows the information resources center there can use volunteers to help sort out people’s questions they have in need of different services during the war. A mother comes into the library to inquire how she might locate her daughter Audrey, who has gone missing after the air raid. When Billie hears the daughter’s name, she wonders if the young woman she found dead in the café could be the missing daughter, as she had heard the young woman called Audrey. Lydia sends Billie to the police station to talk to the only woman constable in Hull about the possible identity of Mrs. Crewell’s daughter being the dead woman. Avis Crane is impressed with Billie in the connections she’s made in the missing daughter case and the dead woman, and Avis asks Billie to join the police force as the second WPC (Woman Police Constable), which Billie is thrilled to do.

The dead woman is indeed identified as Audrey Chetwell, Mrs. Chetwell’s daughter. Audrey’s father is a powerful city councilor and wants his daughter’s death attributed to the air raid, and so it is. This doesn’t stop Billie from suspecting Audrey was murdered. Meeting up again, now that she is on the police force, with the constable whom she shared the body finding experience, she learns his name is Peter Upton, Special Constable. Before long, Billie and Peter will be investigating the death of Audrey Chetwell on the sly. The twists and turns the investigation takes will have the investigating duo and the reader wondering who is loyal to Britain’s fight against Germany and who is a traitor. The author is never unfair in her clever presentation of multiple possibilities for traitor and murderer; all the possibilities are plausible suspects. In an atmosphere of subterfuge from both sides, a war is an easy place to suspect the wrong person. And, of course, first you must learn to trust the people you’re working with, starting with Peter.

The story is told through the eyes of Billie and Peter, so we get two perspectives and character revelations. Billie is much more solidly developed, as her background is so informative of who she is and what she wants. Of course, the contrast between who Wilhemina was and who Billie is shows a giant leap of growth. Peter gets a good set-up of who he is, too, but his thoughts and motivations aren’t as clear as Billie’s yet. That Billie and Peter can come together as working partners is an important step for both them personally and the future of the police force. I think the author did well to include Lydia, who is easy-going and pivotal in Billie’s establishing a new life. Lydia is the breeze coming through the room when it gets too hot.

Death in a Blackout was such a satisfying read for me, taking me places I hadn’t been before in one of my favorite time periods of history and learning parts of the WWII story in England I was wholly unfamiliar with. Jessica Ellicott has created a many-layered story with fascinating connections, filling in historical blank spots for me with a compelling narrative and characters who seemed to leap off the streets of history into the story. Showing once again that stories can powerfully relate the events of the past to us through the lives of those who lived them, making them more than just dates and names. The danger and suspense are palatable in Ellicott’s storytelling, and her research is evident throughout the flow of the story. I didn’t realize just what I was missing in my WWII reading, and I’m grateful to Jessica Ellicott for bringing it to my attention. I am so glad that the WPC Billie Harkness’ narrative will continue, and I’ll get to read more about this independent-minded, resourceful trailblazer.

Thanks to author Jessica Ellicott for sending me a copy of Death in a Blackout that I won on the Jungle Red Writers Blog.