A Dish to Die For by Lucy Burdette: Reading Room Review 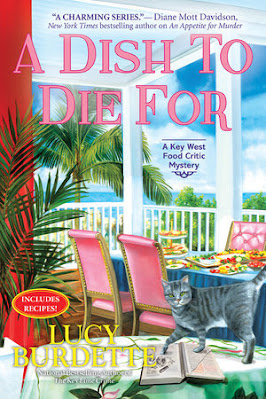 August is hot, and it has me wishing for the cool winds of fall replacing the cold blasts of air conditioning. However, August this year has redeemed itself with the arrival of new books from favorite authors, especially a favorite series set in one of my favorite places. That’s a lot of favorites, and Lucy Burdette’s Key West Food Critic Mysteries so deserve that word for so many reasons. A Dish to Die For is #12 in the series that features Hayley Snow as the food critic for Key Zest online magazine. How we’re already at a dozen books, I don’t know. Time does indeed fly when you’re having fun. Having visited Key West multiple times, each book has been a walk down memory lane, as I recognize street and restaurant names, but I’m always learning more about this wonderfully quirky island, too. It’s a delightful surprise to see what unexpected place another murder has occurred in this paradise of relaxation and five-o’clock-somewhere.

Hayley Snow is taking an afternoon off to spend with her friend Eric at Boca Chica Beach, a “little stretch of seaweed, sand, and mangroves” beach on Geiger Key, about twelve miles up from Key West. Eric brings his dogs and Hayley brings her husband Nathan’s dog Ziggy to give the dogs a fun time of running loose on the beach. Ziggy manages to “unearth” a man’s body that had been covered with sand from the storm the previous night. When Hayley discovers Ziggy’s find, she doesn’t have to wait long for the body to be identified. A local bird watcher named Davis Jager happens along and recognizes the dead man as Gerald Garcia, or GG, a wealthy Key West landowner and developer. GG was an infamous figure in Key West, a man who followed in his father’s footsteps as a cheating husband and a land developer who cared nothing for the consequences of development on the land. So, plenty of people hated the man, but few would have had opportunity to off him on that beach, as his death occurred at night on a beach that was not officially a public one, while a big storm was brewing. It’s rather a locked-room mystery but on a deserted beach.

It's a given that Hayley will become involved in the investigation of G.G.’s death. Not only do Davis Jager and surprisingly Nathan pull her into it, but Hayley’s own job will pull her in, too. Having come across the original 1949 copy of the Key West Women’s Club Cookbook, Hayley is planning a Key Zine article on it and the historical connection of food and the island. Intimately involved in the 1949 cookbook project was G.G.’s grandmother and future mother. Hayley has also agreed to help her mother with the catering for G.G.’s memorial reception to be held at the Key West Women’s Club headquarters, a house that holds some very old secrets.

As if Haley doesn’t have enough to juggle, Nathan’s estranged father, Chip, is in town to oversee the accreditation review for the Key West Police Department. Even Hayley, with her charm and temptings of tasty food, will have a tough job of bringing Nathan and Chip together. But oddly enough the two men do agree on something, that Hayley’s involvement in the Garcia investigation is helpful. In fact, the reserved Skip even compliments Hayley’s skills.

Of course, fans of this series want reassurance that Miss Gloria, Hayley’s dearest friend and octogenarian neighbor on houseboat row in Key West, is in on the action. I’m delighted to disclose that Miss Gloria is front and center with Hayley in this investigation. Lucy Burdette has the same gift with characters as she does with setting. She brings them alive for readers to experience up close and personal. As a reader who has loved this series since its beginning, I think I can vouch for the many other fans who feel how much Hayley and Miss Gloria and Nathan and Janet and Sam and Lorenzo and Steve Torrence have all become like family. And, that’s just the start to a cast of characters who come in and out of the stories and Hayley’s life. I was pleased to see the addition of a female law enforcement character, Deputy Darcy Rogers of the Monroe County Sheriff’s Department. I hope to see more of her in future stories. It was satisfying to meet Nathan’s father this time, as we had already met his mother, Helen. I wonder if there’s some more story to come for this divorced couple who helped shape Nathan.

Lucy Burdette has created a series that never drags. It is always fresh, introducing new characters alongside the favorites and great stories that find different parts of fascinating Key West to explore. Yet, there is always that comforting familiarity with characters and places, too, that feels so like coming home. A Dish to Die For is everything I’ve come to expect in a story from this series, and it might just be my new favorite. I loved all the history of the Key West Women’s Club brought out through the vintage cookbook, and the twist of the resolution was perfect. The food was delectably described to make my mouth water, pointing to more restaurants to try. Oh, and the mention of the Key Lime Cake at Firefly’s was a bonus I didn’t expect. Thank you, Lucy. Readers, don’t forget the recipes in the back of the book. I’m looking at the Party Sandwiches to fix first. So how about that? A Dish to Die For is rewarding from start to after finish.

I received an advanced copy of this book from Crooked Lane Publishers.