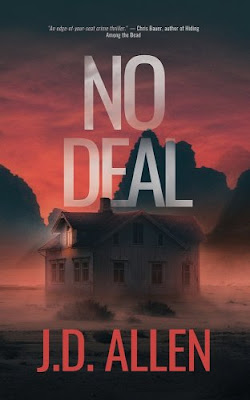 No Deal is the sixth book in the Sin City Investigations series by J.D. Allen, or as I refer to it, the Jim Bean series. Jim Bean is a Las Vegas private investigator and the star of the series, a likeable character who always starts off with what seems a simple case that turns into a complex one requiring all hands-on deck. Those supporting hands/characters of Sandy, Eli, and Oscar/O bring skills to the task that work successfully with Jim’s. J.D. Allen is a master at developing interesting characters, both those recurring ones we love and those villainous ones for each different story. And, each story is a thrilling, suspense-filled ride.

Jim Bean has accepted a last-minute job to protect the teenage heiress of a businessman from India, Manish Rellan. The girl, Zevah, lives in Las Vegas with her American mother, who has been divorced from Manish for some time. The father is in town on business and has told Zevah that he will take her shopping for her birthday. When an unscheduled meeting comes up for Rellan, he passes that outing on to Jim Bean, her bodyguard for the day. Once again, Jim is looking at an uncomplicated assignment, and once again it all goes to hell. He and Zevah are kidnapped right as they are leaving the parking garage of the casino hotel where her father is staying. The kidnappers are actually there to snatch Zevah, but Jim, in all his devotion to duty, handcuffs himself to Zevah before she’s pushed into a waiting vehicle. Hours later the pair wake up from being doped in what appears to be a cell of sorts, definitely with a door like prisons would have. There is no means of escape, and Jim is still handcuffed to his charge. She informs him that there’s no way her father will pay any ransom, that he has made it clear to all who know him that it will not happen. Of course, Jim isn’t happy to hear that bit of news, as that makes the two of them vulnerable to being readily disposed of.

Sandy, Jim’s assistant, has been working hard on the requirements she must meet to become a licensed private investigator. She wants to be official and not just an office assistant who also helps some with investigations. Jim knows that Sandy is a major asset and is happy for the path she’s taking. He will be even happier when it’s Sandy who realizes that Jim and Zevah have been kidnapped and sets in motion the discovery of their location. The discovery of that location prompts Sandy to call on Oscar, a bail bondsman who is one of Jim’s best friends. O has contacts all over, in law enforcement and other places best not mentioned. Eli, who is master of the computers is on a well-earned vacation, so Sandy must dig in deeper than ever to open computer files that aren’t supposed to be opened. O is able to call in a big favor that will help the search for Jim. Eli gets back in time to help, and the Las Vegas Police and the FBI are involved. This is not the first such kidnapping by organized groups in the area, so the FBI is keen to find and interrogate the kidnappers.

Meanwhile, back at the ranch, or the cabin in the middle of nowhere and surrounded by mountains of forests, Jim is trying to come up with a plan to escape. It will have to be a plan that involves his teenage client, as they are still blissfully handcuffed together. Time is of the essence since it won’t be long before the kidnappers realize that there’s no ransom money coming. The two points of action, Sandy and crew trying to get to Jim, and Jim orchestrating an escape from armed men, are on a collision course of high-octane action that will leave you gasping. But, the twists that are to follow will knock the wind right out of you.

It's possible to read No Deal without reading the previous five books, but those of us who have started at the beginning would advise other readers to do the same. J.D. Allen is one of those writers who a reader recognizes right away is a major talent. Put simply, this author can write. She does it all well—characters, setting, plot, action scenes, self-awareness moments, suspense. Thrilling seems to be overused these days, but J.D. Allen’s writing is the very definition of that. You could substitute riveting or electrifying, but it all comes back to thrilling. And, even beyond that, her books are thrilling with heart and soul in them. The Sin City Investigations series never disappoints. It remains one of my favorite contemporary crime fiction series.