Back to the Garden by Laurie R. King: Reading Room Review 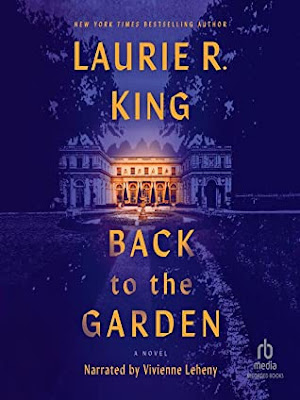 “And all the while, Michael Johnston lay in his hospital bed, gloating and festering his way toward the darkness, carrying with him all those unshed secrets. Somehow, he had turned their investigation into a game, a twisted monster’s final amusement.”

Laurie R. King has given us such thrilling stories in her Russell and Holmes series, her Kate Martinelli series, her Stuyvesant & Grey books, and her stand-alones. Now she has a new series starting that features a new lead character, Raquel Laing, and she looks to be another whom readers will want to follow. Back to the Garden is a book that deals with two timelines fifty years apart, going back to the 1970s in California where free lovers and free spirits also became targets for serial killers.

Raquel Laing is an Inspector for the San Franciso Police, currently working in the Cold Cases Unit. She had only been a patrol police-person for six years when she landed a desk in homicide, which many of her co-workers resented. They refer to her a Sherlock, which Raquel hates. But there’s no denying how good she is at her job, and her mentor, Al Hawkin (of Kate Martinelli series fame), has brought her onto his Cold Cases team. She has great intuitive skills; she can read people and tell if they’re truthful or not. It’s not magic, just good detecting. Although her social skills are lacking, sometimes sidestepping the leading up to and finishing touches of a conversation, Raquel can cut through the deception of a suspect or criminal and get results.

And, it’s Raquel’s detecting skills that her boss Al Hawkin is sorely in need of in finding a serial killer. When the killer is revealed through Raquel’s acute observational skills (a fascinating observation), a new urgency arises. The Highwayman, the name given to this particular serial killer, is currently in a hospital bed near death, and Al’s cold case department is working hard to get locations and names of at least nineteen victims. Despite her lack of social graces, or maybe because of it, Raquel is the only one who can communicate with him effectively at all. The killer thrills at remembering how he snuffed out the life of the young women and shows no remorse even as he’s dying.

The Gardener Estate and its mansion has long been a source of curiosity for people. Its history includes a struggle between the older generation and the younger of what its legacy should be. The Gardener brothers Rob and Fort were raised by their grandfather and their great-grandmother on the estate to be the suitable heirs. The problem was that neither brother wanted to carry on a legacy or be like their grandfather in any way. So, Rob went off to fight in Viet Nam in the early 1970s and Fort went to India to learn a new way of life.

Back from Vietnam, Rob was at a commune in Oregon when he heard his grandfather had died and left him the estate. So, in what must have had his grandfather spinning in his grave, Rob takes the commune he’s in from Oregon to California to make the Gardener mansion their new home. Fort even joins him after a bit, as it is part of Fort’s spiritual journey. The commune called The Commons is successful for four years, and artists, such as famous singers and sculptors visit at times. One sculptor who was particularly interested in putting her mark on the estate was Gaddo, famous enough to just have one name.

Returning to present day, the Gardener Estate is open to the public, with an estate manager and archivist, and people take tours to see both the glamorous parts of its beginnings and the transformational parts of the commune years. One point of pride for the manager of the estate, Jen Bachus, is the restoration of the gardens. It’s in the upkeep of the gardens where a problem appears in a Gaddo statue. It’s in danger of toppling over, so it will have to be removed, concrete base and all, to have work done. Its removal reveals a secret from 50 years ago, when the statue of three Eves was erected on that spot. Under the concrete is a skull with blonde hair attached. The skeleton under concrete fits the pattern of the Highwayman serial killer, so Raquel is sent to investigate.

The story is divided into “Then” and “Now” chapters, and both timelines are engaging. As the 70s saw me graduate from high school, graduate from college, and get married. I relished the visit to my younger days, connecting to the many references and allusions of the “then” chapters. Early seventies, it was still a time of hippies and communes and free love. By the end of the seventies those were fading out some. But, the Gardener Estate saw four years of this testing of a different way of life, and readers of this book will get a taste of it, learning that even in a free spirit type of existence there were leaders, certain people/characters who kept things running. In getting to know the characters who, along with Rob and his partner Meadow, kept the commune going, readers will start to dread who of them, if any, might be the skeleton found.

The “Now” timeline is a more tense one, as time itself is running out for the victims and their families to find closure from the tragic deaths of the young women. Raquel Laing is indefatigable in her pursuit for justice, and her scenes with the serial killer, Michael Johnston, haunt her, as well as the reader. While she’s trying to get locations and names from the monster who controls the information, she is majorly involved in trying to determine if the Gardener Estate skeleton is one of the Highwayman’s and who it is.

There is a large cast of characters in this story, from both the “then” and the “now”.  The reader is privy to multiple points of view and as Detective Laing is gathering information in her interviews with different people, the reader will be gathering clues and revelations for an explanation and resolution of events, too. One of the characters who gives a birds-eye view of the commune days is the estate lawyer, Jerry Rathford. Through the early days of him delivering the news to Rob of his grandfather’s death and Rob’s inheritance, Jerry is a reliable part of the timeline from the transformation of the Gardener Estate from palatial mansion to commune to a landmark historical spot. Jerry’s recollections of his visits to the commune introduces readers to many of the commune members.

The character of Raquel Laing remains a rather enigmatic one throughout the book, and in a recent discussion of the book by the author, she said that’s how she intended it. It’s interesting to hear authors talk about their characters, as so many authors say they listen to their characters, waiting for them to reveal their personality and thoughts. According to Laurie King, Raquel played things very close to the vest, not even revealing how her leg got injured, which has caused her to use a cane. And yet, readers will be able to ascertain much about Raquel by her actions. We know for certain that she cares deeply about obtaining justice for the victims and closure for families. She even shows some personal information in connection with her slow-burning attraction to someone in the story. But, she is a deliberate, thinking person who is not prone to impulsive behavior. Her physical appearance suggests a no-nonsense, no-frills person—"Small, tough looking, but with the most extraordinary eyes, a sort of translucent amber color… the rest of her was the very opposite of showy: cropped hair, no makeup, “a teal shirt with rolled-up sleeves, khaki pants, sturdy walking shoes, and a cane.”

Back to the Garden is a chilling tale, a time of change in what had always been and the aftermath of how it wasn’t all flowers in your hair love. It’s a police procedural that takes some turns away from what’s legal, but the process is fascinating. Laurie King has taken me on so many amazing adventures and down so many dark roads of twisted suspense, and this book can take its place proudly in her repertoire. I’m delighted with the new character of Raquel Laing, and I am looking forward to learning more about her. King has stated that she hopes to keep the “then” and “now” format to this series, and that suits me fine. There are lots of interesting threads to the world of Raquel, and there’s no one better to explore those than Laurie King.