Fifty Shades of Oh So Hot! 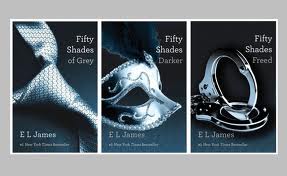 I am slowly returning to the real world after four days spent ensconced in the world of Christian Grey and Anastasia Steele.  I'm not returning of my own free will, as I would gladly stay in that world for a long, long time.  However, the world is insisting that I snap out of it, so I suppose I must.  If I'm dismissed as a fan fiction reader because I was so caught up in this highly hyped series, then, so be it.  I suggest one read the series, though, before passing judgement.  Reading is meant to take you to places you've never been before, and I believe this criteria was met and then some.  I'm going to post the reviews, which may be edited a bit later, to trace my journey through these intensely erotic and, dare I say, fulfilling novels.  The content is on the brief side, as I was eager to get to the next book and then, at the end, was fairly exhausted.  Now on to the fun of deciding which actor best embodies the looks and demeanor of Christian Grey for the movie.  Many delicious possibilities!


Book #1, Fifty Shades of Grey
What do I say about a book that kept me up until 3 in the morning? Well, it was hot, definitely hot! I'm wondering if it doesn't deserve a 5 star rating just on the addictive aspect of it. After all, I believe that a 5 rating indicates its place in its genre as much as anything. But, for now, it will remain a 4, with a huge leaning to 4 1/2. Christian and Ana sizzle off the page. While some readers may be uncomfortable with Christian's predilection for BDSM, it certainly offers some interesting insight as to the realtionship between pleasure and pain, acceptable and forbidden. The book is an exploration of boundaries for both Ana and Christian, and, if truth be told, it enables the reader to explore, also. With everyone around me, personally and nation-wide, reading and discussing this series, I'm so glad to have finally read the first book. I would talk more about it, but the second book, Fifty Shades Darker, is waiting for me. Oh, baby, this crack is good stuff!

Book #2, Fifty Shades Darker
Just keeps getting better and better.  Hmm, it seems to building.  I think I'm way too ensconced in the language of this series.  Did I mention that I just can't get enough of it?  Oh, that Christian Grey is definitely under my skin!  Rating increased to five stars, as James' writing becomes more carefully edited in terms of repetitive language and character development is deepened.

Book #3, Fifty Shades Freed
In keeping with the spirit of the series, I am just spent.  Crazy, wild read that I will probably crave again.  In fact, after finishing Fifty Shades Freed last night, I immediately picked up the first one, Fifty Shades of Grey, to go back to how it all began.  So addictive!  You'll need a cigarette, whether you smoke or not, after these!