"The Book," or What We All Are/Aren't Talking About 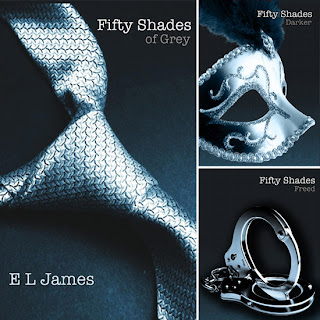 I usually pride myself on being ahead of the masses in finding and reading books before they become wildly popular (was reading Harry Potter to my son before it exploded into mass hysteria), but I have dropped the ball on this one.  Perhaps, I can redeem myself in some small measure by noting that I have been aware of "The Book" for a while, but, alas, I haven't read it or its sequels yet.  I am, of course, talking about Fifty Shades of Grey, which is now being promoted and referred to as "The Book."  I have encountered this book in places as incongruous as a funeral home visitation line to as familiar as my daughter's avid absorption of  it.  What is absolute in every encounter is the hushed tones with which the title is mentioned.  There is a pause and then a whispered, exaggerated lip movement revealing the name of this it-that-will-not-be-mentioned book.  I suppose that the pseudo appellation "The Book" is a direct result of readers of it in their confessional approach to admitting their reading and enjoyment of it.  Yesterday in a cafe, while eating out with my daughter (confessed reader and lover of said book), I spied a solitary woman eating and intently reading her Kindle.  I just can't help myself.  I asked her if she minded telling me what she was reading, to which she looked at me and whispered, "The Book."  Ah, another one.  LOL!  We then engaged in a secret society discussion with my daughter on the need to read it and see what all the hoopla was about.  "Erotic" is a word used to describe the category of this romance novel (there, I said the words "romance novel" and wasn't struck dead by the literature gods) into which Shades of Grey falls, and for some conventional mores reason, serious readers or "women and men of good standing (yes, I'm laughing)" don't want to openly discuss their involvement with anything labeled "erotic."  In fact, one friend of mine stated that she didn't want to read it if it contained a lot of "stuff" like that.  Of course, I replied in my rebellious, can't-censor-me way that I might read it just for that reason.  Whatever your reasons for reading Fifty Shades of Grey and the other two novels in the series, Fifty Shades Darker and Fifty Shades Freed, you will become a part of a phenomena sweeping the nation.  Did I mention that I had to run out and buy all three books yesterday?  I will have to delay my reading of them until next week, as I am finishing up the young adult Sally Lockhart series by Philip Pullman, but I have been assured by those who have gobbled up the Grey books that I am in store for a fun and fascinating ride.  To be continued . . .