So, I had my entire report on Bouchercon ready to blog, except for the pictures, and I somehow deleted it.  Not a happy camper.  I will now begin a new post on this wonderful experience, but I might be adding it in increments this time.  So, here goes, again.

Attending my first Bouchercon was perhaps the highest point of my reading life, other than reading, thus far.  At the end of it, I was spent in the best possible way.  Only a frenzy of author meetings, book signings, book talk, book dinners, and book buying could produce the feeling of euphoria upon which I am still riding high.  Of course, the best part is that I now get to carry these memories into the reading of books by all of the fantastically talented writers that I met and listened to.  Putting a personal link to so many of my favorite authors and series will enrich my reading and stir my heart with each new book.

With so many of my favorite authors attending Bouchercon 2013, I was truly the metaphorical kid in the candy shop.  There were always authors walking the hallways, signing and spending time in the book room, and taking part in intriguing panels.  Accessiblity was constant.  I was able to see, listen to, talk to, and get pictures taken with the rock stars of my reading world.  There were a few authors that I had intended to and wanted to meet that I missed, but that was simply due to the abundance of desirable authors and not being able to be two places at one time.  That super power would have come in extremely handy.

So starting the list of authors with whom I was able to spend glorious moments was Laurie R. King.  I have been reading Laurie's Mary Russell and Sherlock Homes series for years, and my dream to meet her took on fantasy status at Bouchercon.  Before this event, I had hooked up through Goodreads with the Friends of Laurie, the LRK Virtual Book Club, and been generously received into a group who have known and followed LRK through many Bouchercons and book events.  I met up with the wonderful members of this group who were attending Bouchercon 2013 on my first morning there, becoming acquainted and getting my Bouchercon entry badge decorated in true Bee style (The Beekeeper's Apprentice being the first in the Russell/Holmes series).  Through this well-organized, affable group I not only was privileged  to meet Laurie King and her daughter Zoe, but I had dinner with the lot.  Laurie was so gracious, and I thought my heart might beat out of my chest when she sat down and talked to me and those with whom I sat.  It was an amazing experience that is a recurring event with FOLs at the yearly Bouchercons.  I am proud to be a member of this group now, and I'm so grateful for their acceptance and guidance as a first time attendee.  I should note that LRK writes wonderful books other than the Russell/Holmes series, and I am about to read her latest, The Bones of Paris, her second novel featuring Harris Stuyvesant.  One of the aspects of Laurie's books I enjoy the most is her second-to-none talent at making the different settings of her books come alive and engage the reader.  The research and intelligence of this author shine through in each and every book she writes. 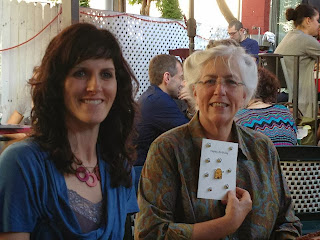 Another of my near-heaven experiences (lol) was meeting Elly Griffiths (Domenica de Rossa), with whom I had an immediate connection and felt as if I were seeing an old friend I hadn't seen for some time.  Meetings like the one with her make me think that maybe reincarnation is a possibility, and that she was an important part of one of my former lives.  There are just those few times in our lives when we meet someone that we are immediately comfortable and know that here is a friend whom I was intended to find.  Of course, what led me to this fateful meeting was the brilliant writing of Elly's Ruth Galloway mystery series.  What's hard to believe is that I didn't discover these books until this year.  The characters are now favorites, and the stories are so suspenseful and brilliantly paced that I literally can't put them down.  Elly's ability to weave in the historical connections to Ruth's archeological pursuits provides for fascinating reading.  I have to wait until March 2014 for the next Ruth Galloway, but I know it will be well worth the wait. 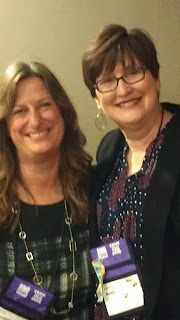 Elly Griffiths and Me


Louise Penny is author of the Inspector Gamache series that I became a fan of a few years ago.  The village of Three Pines and the inhabitants of it plus Armand Gamache and his family and co-workers have simply captured my heart.  Louise was the first author that I was aware of who was attending Bouchercon 2013.  I knew I had to be there.  I was able to meet her husband Michael, whom she includes in her blogs, and he was as gracious and lovely as his wife.  The Beautiful Mystery, 2012, won an Anthony this year for best novel (fourth in a row for this talented author).  Listening to Louise on panels and actually talking to her was yet another piece of surreal wonder.  Luckily, her 2013 novel, How the Light Gets In, came out in time for me to read it before Bouchercon, so I was able to tell Louise how magnificent it is.

Two authors whom I’d met before, but whom I will never tire of seeing are Tess Gerritsen, American Guest of Honor at this Bouchercon, and Sue Grafton, Lifetime Achievement recipient at the event.  The Rizzoli and Isles series from Tess and the Kinsey Millhone Sue writes are two favorite series that I have followed for years and in which I have never been disappointed.  They are masters of their craft.  I have just started W is for Wasted, Sue’s latest.  Tess assured me that she has a new novel coming out next year.   G.M. Malliett is yet another author whom I have been following for a while and love her mysteries set in small English villages, with Pagan Spring being her new novel.

The Jungle Red group of writers consists of so much talent and so many books I’ve loved that I fairly expected the panel featuring this group to explode from the mass of awesome.  The two series that I discovered this year and can’t believe that I’ve lived without before now are Deborah Crombie’s Gemma James/Duncan Kincaid and Julia Spencer-Fleming’s Clare Fergusson/Russ Van Alstyne.  I could not read through these two series fast enough.  They were like a highly addictive drug that I craved more and more of.  These two authors and the rest of this stunning group were so funny and friendly that I am now equally addicted to them as people, not limited to their author labels.  Rhys Bowen, author of the Molly Murphy series I’ve recently begun and will continue lends her British accent to the fun and camaraderie, and she was gracious enough not to correct me when I mispronounced her first name.  Deborah gets special kudos for being at Bouchercon a week before her daughter got married.  Rounding out this crazy, loveable group were Hank Phillippi Ryan, Lucy Burdette, and Hallie Ephron.  I’ve only read one book from each of these three authors, but they are also new favorites.


And, my favorite authors there continue with Jen Danna, Lyndsay Faye, Catriona McPherson, Anne Cleeland, Susanna Calkins, Ann Loan-Wilsey, Ovidia Yu, Peter May, Charles and Caroline Todd,  Harlan Coben, Sean Lynch, Carla Buckley, Simone St. James, Mark Pryor, Michael Robertson, M.J. Rose, and Wendy Webb.  Jenn Danna is another author with whom I felt a personal, immediate connection and am hoping to be working with her on publicizing her works in the future.  She is such a smart lady, and her writing reflects her meticulous research, as in her debut novel,  Dead, Without a Stone to Tell It.  Catriona McPherson is a wonderfully witty Scottish author (now living in California) who is a candidate for life of the party any day of the week.  Catriona’s stand-alone novel, As She Left It is not her first, but it is the one I have read and enjoyed.  Lyndsay Faye is yet another author whose intricate knowledge of what she writes is awe inspiring.  I’ve only read her first novel, Dust and Shadow, but I will catch up soon, knowing that I have in store some great reading.  Lyndsay was also so sweet about picture taking and signing.  Simone St. James wrote a ghost story, The Haunting of Maddy Clare, that was deliciously scary and just what a ghost story should be.  It was nice to meet this lovely author who can write such terror into her characters, and I’m excited to have received her next book, An Inquiry into Love and Death as a gift from her.  Ovidia Yu gets the prize for having traveled the furthest, coming all the way from Singapore to talk about her new book, Aunty Lee’s Delights, which I plan to read very soon.  I shared bus rides and two meals with Ovidia, and a more pleasant person is not to be found.