Leafs Are Turning and Books Are Booming

The last two weeks of October are giving birth to some amazing reads by authors that we've come to rely on for reading that captivates us.  The hour we gain on November 1st when we set our clocks back an hour will be sorely needed to cope with the sleep we've lost over late nights spent staying with these stories we can't put down.  I've read only one so far, but the week isn't over, and there's next week to come.  So, here are some books that will "literally" make your day.  (I've put my personal comments in bold print at the end of each book description.) 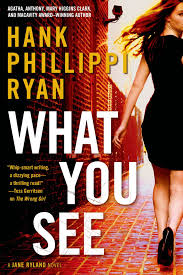 What You See by Hank Phillippi Ryan

(Jacket Description)
Why would a father abduct his own child? A wedding is planned in Jane Ryland's family, but there's a calamity instead. Nine-year-old Gracie—supposed to be the flower girl—has been taken by her stepdad. Where are they? Is the girl in danger? Reporter Jane Ryland learns there's a limit to the bonds of family—and learns to her peril what happens when loved ones are pushed too far.
Meanwhile, Detective Jake Brogan's got a doozy of a case. At Boston's historic Faneuil Hall, a man is stabbed to death in front of a crowd of tourists snapping photos of the murder on their cell phones. Solving the case should be easy, but the pictures and surveillance video lead to a dark conspiracy of extortion and stolen lives.
In her newest ripped from her own headlines thriller, Ryan explores the terrifying realities of today's constant surveillance and the dire consequences to those unwittingly in the spotlight. WHAT YOU SEE puts Jane and Jake face to face with deception, intrigue, and—if they make the wrong decisions—disaster.

I was fortunate to receive and advanced reader's copy of What You See, and this fourth Jane Ryland book is one of my favorite reads this year.  My review can be found at https://www.goodreads.com/review/show/1360222857 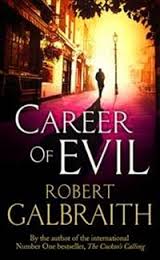 Career of Evil by Robert Galbraith

When a mysterious package is delivered to Robin Ellacott, she is horrified to discover that it contains a woman's severed leg.

Her boss, private detective Cormoran Strike, is less surprised but no less alarmed. There are four people from his past who he thinks could be responsible--and Strike knows that any one of them is capable of sustained and unspeakable brutality.

With the police focusing on the one suspect Strike is increasingly sure is not the perpetrator, he and Robin take matters into their own hands, and delve into the dark and twisted worlds of the other three men. But as more horrendous acts occur, time is running out for the two of them...

Career of Evil is the third in the highly acclaimed series featuring private detective Cormoran Strike and his assistant Robin Ellacott. A fiendishly clever mystery with unexpected twists around every corner, it is also a gripping story of a man and a woman at a crossroads in their personal and professional lives.

As a major Harry Potter fan, I, like many fans, wondered at J.K. Rowlings' foray into crime/mystery writing as Robert Galbraith.  I can say with no hesitation that I am an equally enthusiastic fan of these Cormoran Strike books. 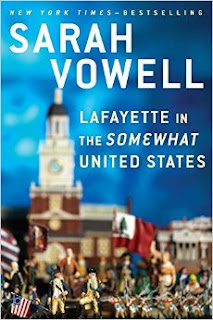 Lafayette in the Somewhat United States by Sarah Vowell

(Jacket Description)
From the bestselling author of Assassination Vacation and The Partly Cloudy Patriot, an insightful and unconventional account of George Washington’s trusted officer and friend, that swashbuckling teenage French aristocrat the Marquis de Lafayette.
Chronicling General Lafayette’s years in Washington’s army, Vowell reflects on the ideals of the American Revolution versus the reality of the Revolutionary War.  Riding shotgun with Lafayette, Vowell swerves from the high-minded debates of Independence Hall to the frozen wasteland of Valley Forge, from bloody battlefields to the Palace of Versailles, bumping into John Adams, Thomas Jefferson, Lord Cornwallis, Benjamin Franklin, Marie Antoinette and various kings, Quakers and redcoats along the way.

Drawn to the patriots’ war out of a lust for glory, Enlightenment ideas and the traditional French hatred for the British, young Lafayette crossed the Atlantic expecting to join forces with an undivided people, encountering instead fault lines between the Continental Congress and the Continental Army, rebel and loyalist inhabitants, and a conspiracy to fire George Washington, the one man holding together the rickety, seemingly doomed patriot cause.

While Vowell’s yarn is full of the bickering and infighting that marks the American past—and present—her telling of the Revolution is just as much a story of friendship: between Washington and Lafayette, between the Americans and their French allies and, most of all between Lafayette and the American people.  Coinciding with one of the most contentious presidential elections in American history, Vowell lingers over the elderly Lafayette’s sentimental return tour of America in 1824, when three fourths of the population of New York City turned out to welcome him ashore.  As a Frenchman and the last surviving general of the Continental Army, Lafayette belonged to neither North nor South, to no political party or faction.  He was a walking, talking reminder of the sacrifices and bravery of the revolutionary generation and what the founders hoped this country could be. His return was not just a reunion with his beloved Americans it was a reunion for Americans with their own astonishing, singular past.

Sarah Vowell's books are how history should be taught.  She ferrets out the underbelly of people and events, and she narrates the findings in a witty, engaging voice.  Her book revealing much of the ugliness of America's role in acquiring Hawaii, Unfamiliar Fishes, is one of my favorite books. 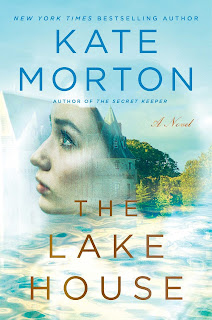 The Lake House by Kate Morton

(Jacket Description)
From the New York Times and internationally bestselling author of The Secret Keeper and The Distant Hours, an intricately plotted, spellbinding new novel of heartstopping suspense and uncovered secrets.

Living on her family’s idyllic lakeside estate in Cornwall, England, Alice Edevane is a bright, inquisitive, innocent, and precociously talented sixteen-year-old who loves to write stories. But the mysteries she pens are no match for the one her family is about to endure…

One midsummer’s eve, after a beautiful party drawing hundreds of guests to the estate has ended, the Edevanes discover that their youngest child, eleven-month-old Theo, has vanished without a trace. What follows is a tragedy that tears the family apart in ways they never imagined.

Decades later, Alice is living in London, having enjoyed a long successful career as an author. Theo’s case has never been solved, though Alice still harbors a suspicion as to the culprit. Miles away, Sadie Sparrow, a young detective in the London police force, is staying at her grandfather’s house in Cornwall. While out walking one day, she stumbles upon the old estate—now crumbling and covered with vines, clearly abandoned long ago. Her curiosity is sparked, setting off a series of events that will bring her and Alice together and reveal shocking truths about a past long gone...yet more present than ever.

A lush, atmospheric tale of intertwined destinies, this latest novel from a masterful storyteller is an enthralling, thoroughly satisfying read.

Kate Morton has amazed us with her previous blockbuster hits full of family secrets and the past coming to play in the future.  The Lake House promises to be just as intriguing, and it's largely set in one of my favorite setting of Cornwall. 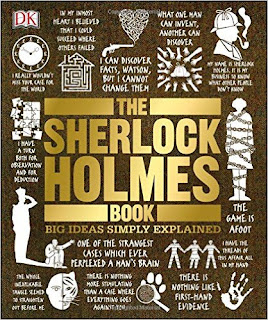 I've already starting delighting in this big book of Sherlock.  For Sherlock fans, it's like a kid in a candy store, and with renowned Sherlockian Les Klinger's foreward, it's especially thrilling.  I'll be including Les' Oct. 15th publication of In the Shadow of Edgar Allan Poe in my Halloween post this weekend. 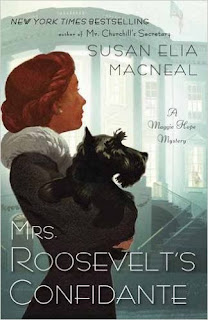 (Jacket Description)
December 1941. Soon after the attack on Pearl Harbor, Winston Churchill arrives in Washington, D.C., along with special agent Maggie Hope. Posing as his typist, she is accompanying the prime minister as he meets with President Roosevelt to negotiate the United States’ entry into World War II. When one of the First Lady’s aides is mysteriously murdered, Maggie is quickly drawn into Mrs. Roosevelt’s inner circle—as ER herself is implicated in the crime. Maggie knows she must keep the investigation quiet, so she employs her unparalleled skills at code breaking and espionage to figure out who would target Mrs. Roosevelt, and why. What Maggie uncovers is a shocking conspiracy that could jeopardize American support for the war and leave the fate of the world
Fifth in the Maggie Hope series, Mrs. Roosevelt's Confidante has been long awaited by me.  Nobody does historical fiction mystery better than Susan Elia MacNeal. 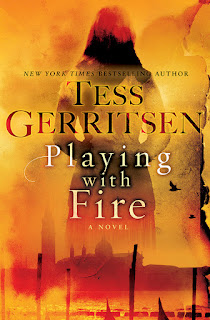 Playing with Fire by Tess Gerritsen

(Jacket Description)
In a shadowy antiques shop in Rome, violinist Julia Ansdell happens upon a curious piece of music—the Incendio waltz—and is immediately entranced by its unusual composition. Full of passion, torment, and chilling beauty, and seemingly unknown to the world, the waltz, its mournful minor key, its feverish arpeggios, appear to dance with a strange life of their own. Julia is determined to master the complex work and make its melody heard.

Back home in Boston, from the moment Julia’s bow moves across the strings, drawing the waltz’s fiery notes into the air, something strange is stirred—and Julia’s world comes under threat. The music has a terrifying and inexplicable effect on her young daughter, who seems violently transformed. Convinced that the hypnotic strains of Incendio are weaving a malevolent spell, Julia sets out to discover the man and the meaning behind the score.

Her quest beckons Julia to the ancient city of Venice, where she uncovers a dark, decades-old secret involving a dangerously powerful family that will stop at nothing to keep Julia from bringing the truth to light.

Playing with Fire is a stand-alone novel from Tess Gerritsen.  Her stand-alones are absolutely as fascinating as her long-running series Rizzoli and Isles. 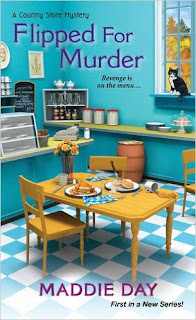 Flipped for Murder by Maddie Day

(Cover Description)
In this freshly baked series, author Maddie Day lifts the lid on a small town in southern Indiana, where a newcomer is cooking up a new start--until a murderer muddles the recipe...

Nursing a broken heart, Robbie Jordan is trading in her life on the West Coast for the rolling hills of southern Indiana. After paying a visit to her Aunt Adele, she fell in love with the tiny town of South Lick. And when she spots a For Sale sign on a rundown country store, she decides to snap it up and put her skills as a cook and a carpenter to use. Everyone in town shows up for the grand re-opening of Pans ‘n Pancakes, but when the mayor's disagreeable assistant is found dead, Robbie realizes that not all press is good press. With all eyes on her, she'll have to summon her puzzle-solving skills to clear her name, unscramble the town's darkest secrets, and track down a cold-blooded killer--before she's the next to die...

Flipped for Murder is the first in the new Country Store series by Maddie Day.  Maddie also writes as Edith Maxwell.
Posted by Kathy Reel at 11:33 PM