My Review of Whispers in the Mist by Lisa Alber 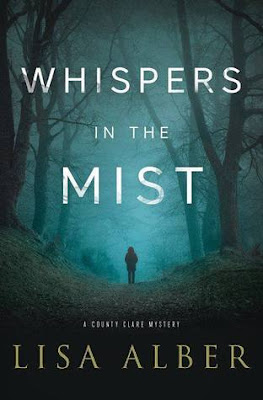 I have known that I wanted to read Lisa Alber's first County Clare (Ireland) mystery, Kilmoon, since I bought it last year.  I can't adequately explain why I didn't read it sooner, but it has worked out beautifully, as I was able to go straight to Whispers in the Mist, the second County Clare mystery out in August, as soon as I finished the first.  A most satisfying experience.  This amazing series set in the imaginary village of Lisfenora, Ireland has captured my imagination and heart, and I'm happy to review Whispers in the Mist here today.

I also have an interview with Lisa Alber coming soon, so you will have an insight to how she makes all this magic of writing come alive for her readers.


Whispers in the Mist Review:

Whispers in the Mist by Lisa Alber


Movies pull you into their world with visual effects and sound effects, cue up the music for atmosphere, so that the fog that envelopes the actors on the screen seems to have you in its grasp, too. Now, consider a novel. It has words, only words, with which to mesmerize you and tease you into its story. And, yet, words are all one needs when crafted by a master storyteller. Lisa Alber is such a storyteller. She takes words and places you squarely into the lush Irish countryside ensconced in a fog of murderous mist that sends goosebumps along your arms. Ah, I have been captured by the absolute magic of words.

Atmosphere is a familiar word to those describing the County Clare mysteries by Lisa Alber. Kilmoon, the first book, had it, and now Whispers in the Mist has it, too. Moving on from the physical effects of the setting, there is the mythical atmosphere of Irish folklore and superstitions that also grabs the reader. As a young girl, one of my favorite pieces of writing to scare me was the poem Little Orphant Annie by James Whitcomb Riley. Being sent to bed away upstairs “Er the Gobble-uns’ll git you, Ef you don’t watch out” placed the danger of disappearing by forces from another world, a world of dark, in my little mind. It was horrible and it was wonderful. So, in Alber’s Whispers in the Mist there is the Grey Man in Ireland, a sinister faery who might snatch you and snuff out your existence with a nary a warning. But, it’s not just children that fear the Grey Man. It’s adults, too, who believe an other worldly force is at work in the deaths occurring in the village of Lisfenora, Ireland.

Merritt Chase, the American daughter of Lisfenora’s matchmaker Liam, is back and it’s once again matchmaking season in this small Irish village. But, Merritt is more background in this story, as Detective Sergeant Danny Ahern and his investigation into the “Grey Man Murders” becomes the focus. Ahern’s character is fleshed out in his quest to out the real live Grey Man who is hidden among them. With the first young man dying in Danny’s arms, the case feels personal in a way that mirrors his struggle with his life, and indeed turns more personal as the story progresses. Since the death of their young daughter a couple of years ago, Danny and his wife have grown farther apart, and Danny is now living in a cottage owned by Liam. So, Danny is trying to solve a troublesome case plus deal with his own train wreck of a life. He is character well worth focusing on, and he will quickly capture the interests of readers with his dedication to duty and love of his children.

Characters are one of Alber’s strong points, and Whispers in the Mist gives readers several new ones, along with greater development of those already introduced in Kilmoon. Dermot and Gemma add much to the mix, and trying to figure out whether they are a good lot or a bad lot is part of the intrigue. Alan, the bartender, receives an expansion of depth and action, making the village of Lisfenora come even further alive in the imagination. The “bad guy” in this story also has connections to Lisfenora that will reveal a love/hate relationship with the village. It is the past and the present of these characters that Alber is so good at bringing together to create a layered story.

So, step into the village of Lisfenora, Ireland and prepare to be scared, delighted, baffled, and thrilled. However, I do warn that you might develop a love of Ireland from the County Clare mysteries and feel the need to travel there.


View all my reviews
Posted by Kathy Reel at 3:20 PM