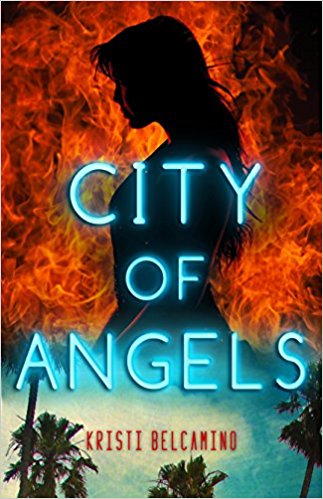 Do you hear your heart beating?
Can you feel the streets reaching?
Has your soul gone screeching into the whirling abyss?
Growing stronger with the punches,
Mind makes consequential crunches.
And, the city rewards you with its welcoming kiss.

The City of Angels by Kristi Belcamino is inspiring.  I am no poet, but this new novel by Belcamino led me to create a poem, trying to express a bit of what the book felt like.  It is the author’s first young adult novel, after starting her fiction writing career with the successful Gabriella Giovanni crime series.  I am such a fan of the Giovanni series that there was some trepidation about the new direction of a YA book.  Of course, I should have trusted Kristi implicitly, as everything she’s written, fiction or non-fiction, has been exceptional.

This novel takes off at a run, literally.  Nikki Black is a seventeen-year-old Midwest girl who follows a fast-talking guy to Los Angles with the lure of becoming a photography intern through his movie connections.  With her mother dead and her father blaming Nikki for that death, the choice to accompany her fast-track boyfriend Chad to L.A. was an easy one for Nikki.  The action starts with Nikki escaping from Chad at a director’s house after she discovers her guide to a better life wants her for a porn movie.  After kicking Chad where he deserves it, Nikki must make a run for it in the ensuing chaos.  Along the way, she picks up a twelve-year-old runaway named Rain, who has been held captive at the director’s house.  The girls in constant motion finally end up in downtown L.A. at the American Hotel, a collection of low-rent rooms over a punk-rock bar named Al’s, and Nikki finds a waitress job to pay the rent.

It's 1992 in the city of angels, and the trial of the policemen who beat Rodney King senseless is stirring up discontent that threatens any haven Nikki is seeking.  Fortunately, she is rooming on a floor with a multi-cultural mix of young people who are both creative and caring, but even those connections can be fragile for someone who doesn’t come to trust easily.  But, when Rain disappears, first into an addiction with heroin and then into an ominous black car.  Nikki is determined to find the girl, who she has quickly come to feel responsible for, fighting against powerful forces that are just as determined to stop another rescue.   Nikki must either choose to trust and let her floor-mates help, or give up on saving the young girl.  It is a fast-paced, high action race which had me biting my bottom lip more than once.  Belcamino knows how to write action, fraught with suspense and tension enough to keep the pages turning quickly.

Kristi Belcamino’s writing checks so many boxes that must be right to result in an engaging novel, a novel that leaves a lasting impression on the reader.  The characters, beginning with the main character of Nikki, to her floor-mates, to the homeless character of Frank are developed with careful attention to detail.  Dress, hairstyle, actions, dialogue, hobbies, dreams of these characters all work cleverly to reveal them and bring them to life.  Descriptions of the lay of the land create a visual that ensconces the reader into the story, walking down the streets of a troubled city, with shadows lurking over the shoulder or running on the beach with terror choking you.  The plot is always under calculated control and moving forward with seamless transitions.  Nikki’s backstory is included in well-paced intervals that don’t distract from the current action.

City of Angels packs a punch with history and issues that will appeal to readers well beyond the teen audience.  Those who remember the L.A. Riots, the early days of HIV, and punk rock bands like Nirvana will have an appreciation of their importance.  Issues such as child pornography, sex trafficking, homelessness, religious control, and racial profiling are ones that our country has still not dealt with effectively.  And, yet, at the heart of this novel is a seventeen-year-old girl who shows what courage, resilience, and resolve the young can hold.   Kristi Belcamino is an author who can weave all of those issues and that history and that heart into a compelling story that will take your breath away.

I received an advanced copy of City of Angels in exchange only for an honest review.  My review reflects my sincere experience in reading an outstanding book.
Posted by Kathy Reel at 1:42 AM